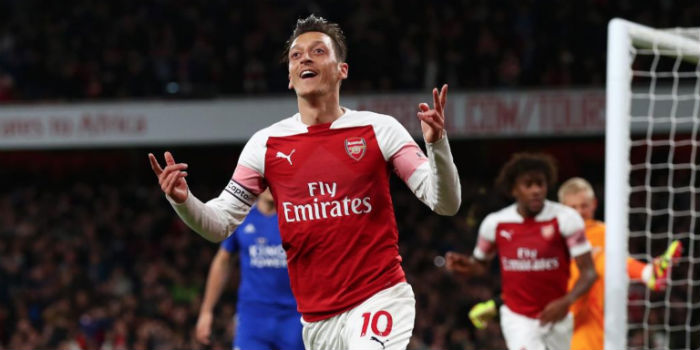 Arsenal’s game against Leicester City, which was due to take place on Monday April 29th, has now been moved because of the club’s continued Europa League schedule.

The match will now take place on Sunday April 28th with a kick-off time of 12 noon. We’ve seen situations in other countries where the fixtures are moved around to help clubs still involved in Europe, but it’s hard to remember that ever happening in the Premier League.

It now means we play Sunday (Crystal Palace), Wednesday (Wolves), and Sunday again (Leicester) before our first leg against Valencia on May 2nd.

Although it hasn’t yet been officially confirmed, it’s certain that our final home game of the season against Brighton – which is currently scheduled for Saturday May 4th, will move to Sunday May 5th because we play on the Thursday.

The final league game against Burnley can’t be moved, for obvious reasons.

For more on the game, check out the brand new Arsecast

Not that it really matters, other than I like a MNF, but what makes playing on that Monday before Europa League different to the Monday just gone against Watford?!

I’m assuming not very much other than it gives us 4 days to prepare for Valencia rather than 3.

My point being why was the Watford game not rearranged?

We’re more likely to have to play 90 minutes against 11 men?

One day here or there should not matter at this stage.

We need to be hungry enough to play through it.

Its just 5 matches left in league and the two semifinal legs.

With all the running in 7 games (potentially 8, if we make the final) as well as dealing with the mental pressure of trying to win those games to win a trophy Nd secure the best league finish in recent years, you really want to sit there and say “its (sic) just 5 matches left…”?

What is the chances of the Brighton game getting moved to the Monday?

I am very worried as I’ve booked to fly to London with my son for his first arsenal game and if its on the Monday we’ll have flown out and he’ll be heartbroken!

arseblog
Author
Reply to  A gooner

Pretty sure it’ll be the Sunday.

Interesting that the Dutch FA have cancelled a whole week of fixtures prior to Ajax’s champions league match.

On a personal level though I do enjoy the chaos of it all. ?

For the sake of the world.

The Dutch have done the right thing.

God forbid Spurts go to the finals. I hope Ajax schools them.

To the detriment of Juventus. Lol

And hopefully to the detriment of Spuds too!

Bloggs are you saying we have been helped out then?

I think this is business end. The squad have to steel themselves now and not factor in (psychologically) the limits of a packed schedule. We have the targets in our cross hair. Spurts can be taken with them having to reface City in league. Its up to us to keep up pressure and make them bottle it again. Its 5 matches left so we need to just play through it (rotation notwithstanding). Mentally we have 3 clean sheets now and 2 on the road (neither particularly easy fixtures) So we need to have the belief but the mental strength at… Read more »

The FA is not helping matters. God help us. Amen

In light of its timing after the Watford match. Playing on Wednesday and then on Sunday. Its quite hectic for the boys especially since it’s a PL fixture.

Anybody else still dreading the Wolves game?

I’m hoping the busier schedule for Spurs, coupled with Kane being injured, Son being suspended for the first leg, and Ajax hopefully getting a good rest will be enough to see Ajax cruise through.

In regards to us, it’s a fairly tough run, quite the juggling act indeed, Wolves and Leicester away are difficult matches.