THE LOWDOWN
Arsenal travel to Brighton on Sunday knowing that a victory confirms their first league title in seven years. The Gunners have two games remaining, but will want to avoid a title shootout match at home to Manchester City on the final day. Joe Montemurro’s side have not dropped a single point against any team outside the top 3 all season and if that record holds, they will be champions.

Brighton have moved the match to the AMEX Stadium in the hope of attracting a record crowd. Ordinarily Hope Powell’s team play at Crawley Town’s Checkatrade Stadium. Arsenal have professionally knocked out the required wins in recent weeks, even if some nervous energy has been detectable in recent narrow victories over Birmingham and Everton.

Brighton are safe from relegation and in front of a partisan home crowd, they will be motivated to prevent Arsenal from hogging the limelight on a big day for the Seagulls. In Ini-Abisi Umotong, Brighton have one of the best forwards outside the top three clubs. Her pace on the break will form a big part of Hope Powell’s game plan. Umotong scored from a breakaway in the reverse fixture back in November.

Yet ultimately, if Arsenal play close to their ability, they ought to win. Their own nerves might be their biggest obstacle as English football’s premier women’s team closes in on its first league title for seven years, a pause that has been far too pregnant given the quality they’ve had at their disposal during this time and the money spent. Arsenal are bidding for their most triumphant league title to date.

TEAM NEWS
Arsenal have no new injuries to report. Jordan Nobbs, Pauline Peyraud-Magnin and Lia Wälti all miss out with knee injuries. Emma Mitchell was fit enough to return to the bench last weekend against Everton after an ankle problem. Beth Mead ought to be fit, despite a poor tackle leaving her with a bruised ankle during the victory over Everton last weekend.

LAST TIME OUT
Arsenal were 4-1 winners over Brighton at Meadow Park back in November, despite going behind to an early goal from Umotong. Goals from Dutch trio Vivianne Miedema, Dominique Bloodworth and Danielle van de Donk gave Arsenal a commanding half-time lead. Beth Mead put some extra gloss on the score line in the final ten minutes.

PLAYER TO WATCH
Since losing Lia Wälti to injury in January, Dutch international Dominique Bloodworth has been restored to her preferred position at the base of the midfield. Bloodworth has shone in recent weeks, reducing the impact of Walti’s injury with a series of composed performances. But most valuable is her range of passing.

Dominique passes well with both feet, which allows Arsenal to build rhythm quickly. Her range of passing is varied too, equally adept at short and long passes. She especially favours the lofted ball over the top of the opposition defence. Brighton are likely to bank up and be organised in defence, Bloodworth’s passing will be a valuable weapon in moving the Seagulls defence around and providing a supply line to Miedema. 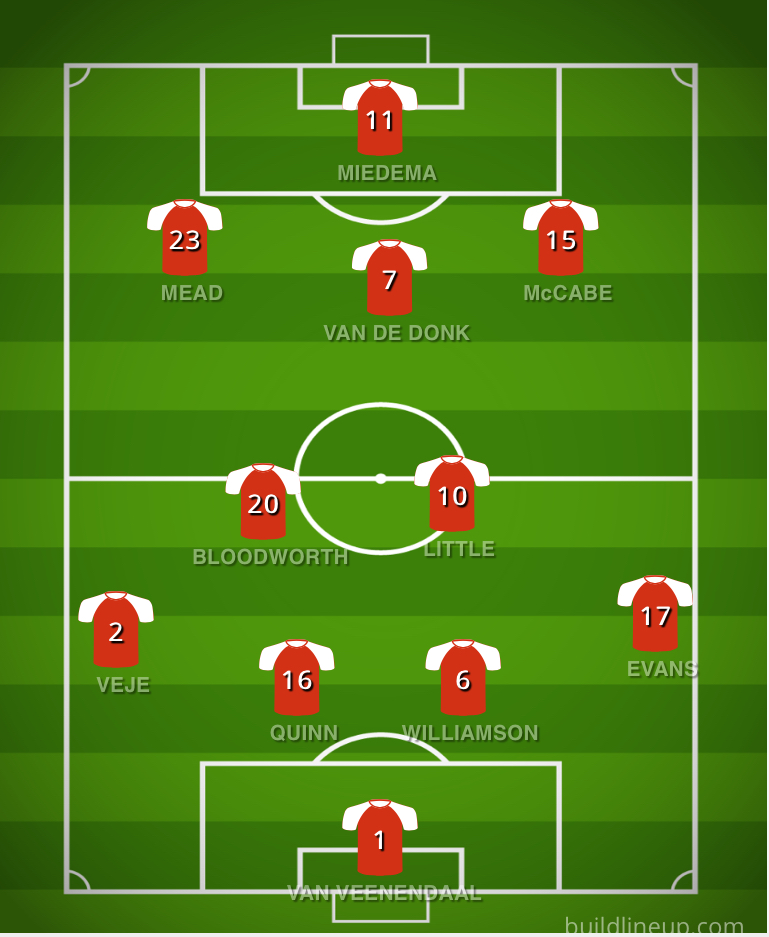 HOW TO CATCH THE GAME
The match will be played at Brighton & Hove Albion’s AMEX Stadium, with tickets available on the door priced 3 pounds for adults and 1 pound for children. Online bookings are available at the link below. The game is also being screened live on BT Sport 1 and the match kicks off at 12.15pm this Sunday.

Could @ArsenalWFC secure the #FAWSL ? at the Amex Stadium on Sunday?

COMING UP
We will have exclusive match reaction from manager Joe Montemurro on the site on Sunday evening and, if Arsenal are victorious, we might throw in another interview or two! If you haven’t already, check out the April Arsenal Women Arsecast in which we talk to Gunners legends Faye White and Kelly Smith about the historic 2006-07 season in which Arsenal won the quadruple without losing a single game.

In 2006-07 @ArsenalWFC won the quadruple and became the only UK team to win the European Cup. I spoke to captain @faye_white and Arsenal legend @kelly_smith10 about that historic season and some of the personal challenges faced by both players during it https://t.co/CtjnJLzHeZ

Very much enjoyed the podcast, thanks. I’m already soooo nervous about tomorrow, let’s hope the players are made of sterner stuff! Interesting that you mentioned Umotong, because she is one of the very few players in other squads whom I covet for Arsenal Women. Not instead of any of our current forwards, in addition to them. Bloodworth has impressed me a lot, not only for the reasons you give but also because – perhaps a symptom of greater confidence? – she has become less passive, more of a leader. It’s one of the joys of watching this squad, seeing the… Read more »