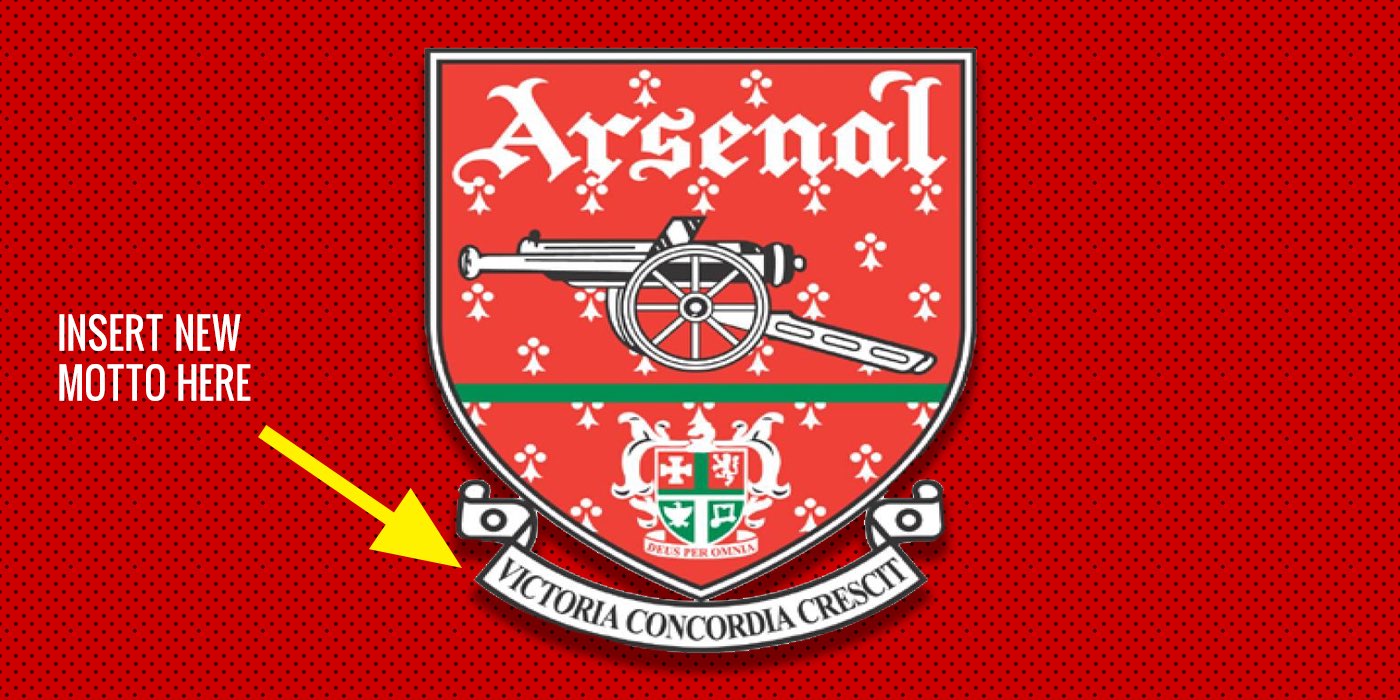 As everyone knows, the Arsenal motto is: Victoria Concordia Crescit, which means Victory Through Harmony.

However, in documents seen by Arseblog News, we can reveal that harmony is set to be sorely tested as KSE have plans to overhaul the club’s branding and have already paid Brand Python – a Dallas based marketing consultancy firm – a ‘high six-figure fee’ to manage the implementation of a new motto which is more in line with the ‘modern soccer environment’.

Many have wondered what the long-term implications of Arsenal being 100% owned by KSE would be, and it seems that no tradition is sacrosanct as they look to maximise the potential revenue streams, citing a need to make the club motto more connectable to younger fans, particularly in other parts of the world.

In correspondence leaked to us, it’s clear that Stan Kroenke is well aware of the history of the motto, but regardless is keen for something new as the brief outlines:

The process has been ongoing for some time, with test groups suggesting and rejecting a series of new mottos, and a short-list of dozens has now been whittled down to five to be decided by a public vote.

Those five options are:

A spokesperson for the Arsenal Supporting Trust was aghast at the news, saying, “This is yet another example of the Americanisation of our great club. Some of those things have been beneficial, such as the Jumbotrons©® and bigger hot dogs, but this is a step too far.

“I’m sure Arsenal fans will be harmonious in their disharmony towards this idea. For once this is something all true supporters can agree on, and those that don’t need to ask themselves if it’s Arsenal they love, or a relentless pursuit of modernity for no good reason.

“We call on the board to whitewash this pointless exercise at once, and think about how the money already spent on this project could have been used to subsidise tickets for the next generation of young fans.”

It’s believed that the vote is due to take place at the end of the season, with the winner announced at an event ahead of the pre-season friendly against fellow KSE franchise, Colorado Rapids, taking place on July 15th. There are even some rumours that it could be tied into the launch of next season’s kit which will be manufactured by Adidas in a new £60m per season deal.

A range of merchandise will be distributed along with the kits to get the new motto in front of as many eyeballs as possible. These include baseball caps, wristbands, t-shirts, iPhone covers, car stickers, and a range of inflatables, and a Twitter hashtag #newmottonewarsenal.

We reached out to all parties for comment, but as yet no reply has been forthcoming from KSE, while calls and emails to Brand Python have remained unanswered despite their social media channels being active all weekend.

More on this as and when we get it.

Had me up until “bigger hot dogs”.

Eddie thrown in there just in case

I vote for “Victory through Va-Va-Voom”. Total class. Love it.

I vote for THE CLUB THAT ARSENE BUILT

How long were you sitting on that one for?

For some reason it clicked when I read “in correspondence leaked to us”* But you fully had me up until then! Including an out loud exclamation of “are they mad!?”. Nice job! *Disclaimer: it’s not that I didn’t believe arseblog would have access to this info, just a coincidence!,

Spelling mistakes and Eddie McG gave it away! I worry though that it will not be seen as April Fool by KSE!.

Alas, the timing of this article was the little clue.

Kudos to the creativity.

I nearly shit my wags… then realised the date… damn you! … and breathe.

And I was like ‘those mothaf*ckers can’t even write Highbury right’.

Success and public acceptance can only be guaranteed by the participation of Eddie McGoldrick – our once and future king.

Blogs, it’s 1 AM and I need to sleep not reading April fools jokes ffs 😀

What about Arsenal McArsenaly Face?

Vieira of My Ways

Bastard! Had me for a minute.

Fair play blogs, properly got me. Was f’in livid, ranting out loud to the missus, now feel a complete twat. Standing ovation.

Starting early then are we Blogs?

Had me until I saw Eddie Mcgoldrick???

Had me til I read the alternatives. They were so dire it was obvious. Nice one Blogs….

Winner will get 2 free tickets to all Arsenal home matches played in February,
if they fall on the 30th or 31 of any year.

I embarrassingly admit that it clicked only after I read the options. On a side note, how long does it take for money from Nigeria to reach a bank account in Australia?

If sourced from a certain Nigerian prince of some renown now – as little as NEVER.. the other way though, within 3 business days..

I’m Nigerian and this is funny… ?

As an American who has watched since 2003, “Victoria Concordia Crescit, for life!

Motherf… oh excuse the slowness. You got me there arseblog

Reading this in Los Angeles, and it took me a moment to realise what time, and therefore what the date is in the UK.
You guys having a little fun with us, I hope and assume.
The bait was in my mouth, but I hadn’t yet bitten down on the hook.
Phew!!!!

I vote for 6) Arsenal: We’ll blast your ass! Catchy, rhymes and will strike fear in all.

That was a lot of effort for April fools haha

You had me until Eddie McGoldrick haha

If it wasn’t for the comments, I would have totally believed this article LOL! I still have the angry feeling haha! Damn you!!

Nice one lads, I’d been expecting something from you so I su_edvit straight away.

Damn you got me good

I was coming in hot, ready to write: how about we change it to “spend some fucking money you absent cunts”

Why wouldn’t they just translate the Latin to English?!? It is a wicked slogan as is. Not everything has to be twitterified.

And a happy one to you too.

Haha good one blogs! Got me until the names shows up.

If these options made sense, the comments would have sustained for whole week..
Those five options are:

Always invincible could be short and simple for many

Not a bad motto if we ever change the standing one.

I got all the way to Eddie McGoldrick before I realised the date. Well played.

Damit. I got had again. And the reason is, this chit could really happen. I have seen more idiotic things getting done.

I would be all for bringing back the crest at the top of your article. Kind of retro.

Haha. You almost got me. Good one!

Does this mean there won’t be inflatables? #newmottooldarsenal

You almost had me until Eddie Mcgoldrick

Took me a minute

The worrying thing is that unfortunately you can imagine sappy Stan doing something like that so, till I got to the list of names, it was scarily believeable – I was shacking my head thinking “whatever next”