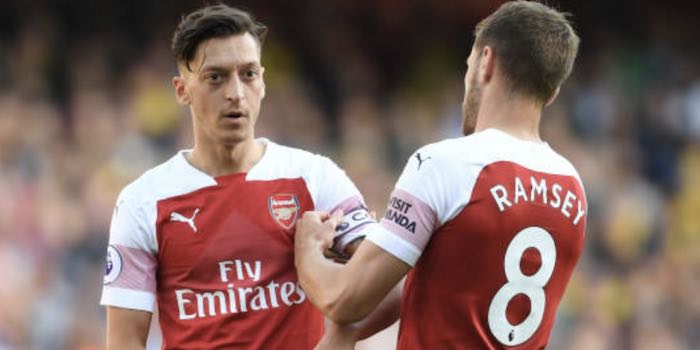 Having a manager who uses different systems for different games, and sometimes two or three formations within a single game, has been something Arsenal fans have had to get used to following Unai Emery’s appointment last year.

The Spaniard likes to prepare his teams with the opposition mind, but has no compunction in making changes during the 90 minutes if he feels that’s appropriate.

And ahead of tonight’s Premier League encounter with Newcastle, the boss has expanded on his ideas and outlined how beneficial both Aaron Ramsey and Mesut Ozil are to his plans.

“I think we are taking a good performance using a different system and different players,” he said. “For example, we started the last two matches playing 3-4-1-2.

“But we finished it playing 3-4-3, with players helping us in the 90th minute with a different system and different positions. We need to continue doing that.

“Maybe we can start with one system, maybe during the match we can change and the best positive is for all the players to be ready to help us, with a good mentality for work like we need each time.”

As for the players, both of whom have spent periods of this season out of the team, it seems like Emery has a better understanding of the qualities they bring.

“At first I used information from last year or the last two years. Mesut can play like a No 10 player, or starting on the right or left, in a different system, and he has a good mentality.

“And also Aaron Ramsey can play in a system with two or three midfielders, getting more in the opposition box.

“I used this information with this player and I think this player’s mind is very open to help us, to play in different positions and give us a big performance.

“He has a very good attitude to do that.”

Ramsey and Ozil started in our last Premier League game, and assuming the Welshman’s thigh problem has cleared up fully, you’d expect them to line-up from the off when we face the Magpies later on.

The way Ramsey played anchor with Xhaka in the utd game was extraordinary and calm.. wonder if Torreira will still come back and if so, where he will play. I do miss his tenacity
It’s always going to be good to give Unai selection headaches. This type of depth will hopefully steer us to get & maintain 3rd

I was impressed as well. Several seasons back Rambo anchored with Flamini well for a good spell and we beat City plus Olympiakos away in a high pressure must win match. This was done with many of our top assets out. Ironically when these assets returned we dried up in front of goal. Rambo lost discipline and tried to go forward more but exposed the weakness of Flamini’s older legs and we were at the end of several lob sided beatings. Of course the natural tendency for most was to blame Flamini but the midfield balance was poor bc Ramsey… Read more »

A polite point, it’s not ‘lob-sided’ it’s ‘lop-sided’. A less polite point, get your goddamn facts right! https://www.premierleague.com/stats/top/players/error_lead_to_goal Torreira hasn’t had a single error directly leading to a goal in the Premier League, yes he like other members have been more at fault at times for attacks breaking down or the opposition getting the advantage, but to say he was solely responsible for five goals against is just a total fabrication of the reality the rest of us actually live in. This is the second time I’ve posted you this link and I’m sure it won’t be the last time… Read more »

Jasonissimo
Reply to  Leno me, I’ll be your friend

“but to say he was solely responsible for five goals against . . . ” Did he write that? I thought I read Torreira has made mistakes “leading to at least 3 goals against.” It’s disingenuous to say “leading to” has the same meaning as “solely responsible for”. And your tone is rude, frankly. I don’t know about your stats link either. First, taken at face value, it is not directly contrary to what the OP has written. And second, it doesn’t say what counts as an “error leading to a goal.” Opta is the PL stats provider and I… Read more »

Leno me, I’ll be your friend
Reply to  Jasonissimo

@jasonissimo/Santori (in disguise) He’s been banging the same drum for weeks, every chance he gets he sings the most absurd biased praise for some players and slanders others for the most obscure and often manufactued reasons. Up until his comment on Torreira his post was fine, but this and so many countless other comments just include needless digs, egotistical self-referencing/‘prophecies’ and the rude berating of others based on their opinions, often accusing others of ‘[email protected] all over’ the player they are defending. “I don’t know about your stats link either” The link I posted is blatantly legitimate and easy to… Read more »

At long last! Real football is back!!!

I juste hope we don’t play real football against a Benitez team.

Thank God he understands what each player brings to the team now. That bodes well for us.

For a few more games. Then what next season? Ramsey every time for me.

I have implcit faith in Unai Emery to do everything tactically possible to bring us CL football next season.
I had always yearned for a horses-for-courses manager to replace the great Arsene, rathet than one who doesn’t seem to bother about the opposition’s tactics.
I believe there is a correlation between that and our improved results against our direct rivals.

Who has a very good attitude Emery? Ramsey?, Ozil?, or both? Seems like he talks about both players but only seems to praise Ramsey, but hard to tell from these quotes and his limited English.

People will always see what they want to see.

Not entirely true. I’ve been trying to see dead people for nearly 20 years and so far nothing.

I have been trying to see the differences between Wenger and Emery. Today eureka, Wenger used same system his entire career and Emery minimum two different systems in same game.

Wenger is a non interventionist. Generally he likes to set up the team and leave them to work out the issues, reluctantly he will intervene but largely too late to affect the issues on hand. It worked when he first came as England was allergic to foreign talent and Wenger coincided with a golden generation of French talent of whom he very much got first pick thanks to his market acumen. But it got more challenging when the field got levelled by a combination of oil rich money and equitable distribution of TV money. Many teams thereon had both foreign… Read more »

Wenger is like a genius inventor who has created an almost perfect engine but somehow has penny pinched on certain parts and overall doesn’t know how to get it to work.

Emery is the Master engineer who comes in to tweak the parts and get the thing purring again.

Whether he can of course sustain the performance now becomes the question.

Wenger never used the same system his entire career. He used 4-4-2 (or 4-4-1-1) with Henry at the top and Bergkamp just behind. He became accustomed to 4-2-3-1 in his latter years. But I remember quite well him switching between that and 3-4-2-1 in his last 2 years. Though I have to admit with Emery it is so hard to second guess which formation he will use

Emery : Ozil has good mentality.
Hope this is not april fools.

Well, many Gooners (including myself) think Ozil has been having a good laugh at our expense since Wenger gave him the new contact. He gets £18 million a year, we get (so far, although a little better recently) good performances from time to time, when he’s fit. Hmmm.

As mentioned before, we play either an inverted triangle with both strikers supported by either of Ozil or Ramsey OR we play the triangle for more width with one striker and the excellent Iwobi left (having excellent understanding with Kolasinac) and either of Mhkitaryan or Ramsey right. That’s the way it looks at the moment. We still lack another natural winger on the right (we have lacked this since even when we had Alexis). This means we are still heavily skewered to left side (albeit more balance with inverted triangle). and dependent on the right wingback (which had led to… Read more »

Elneny is likely to leave in the Summer anyway. I doubt we’ll get that much for him – unlikely to make a profit on the sale – but whatever it is can be re-cycled to part-fund other transfers.

Sp*rs losing in hilarious fashion was pretty funny yesterday. We need these 3 points to take our rightful spot above those cunts in the table.

Certainly funny but we needed that slip up. If only we could have kept the lead we had against them a few weeks ago – those extra two points would be very handy now.