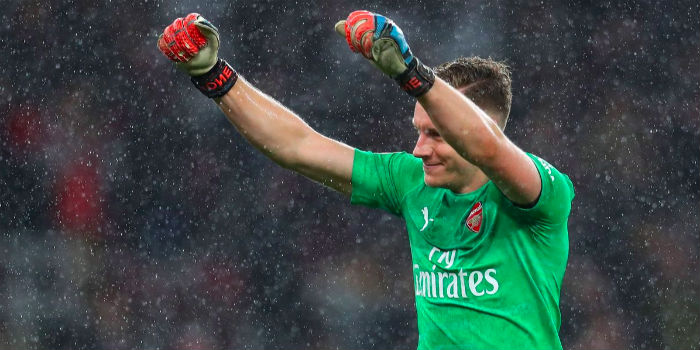 Moving into the top three last night after beating Newcastle 2-0 at the Emirates has increased Arsenal’s chances of finishing in the top four, and understandably there’s a measure of optimism about doing that with just seven games of the season remaining.

However, Bernd Leno is urging his teammates to maintain their focus, and not take anything for granted just yet.

The German was speaking after another clean sheet, the first time this season we’ve kept three in a row, and he says there’s a lot still to do if we want to play in the Champions League next season.

“I think we’re in a very good position but it’s still a long way because the other teams will wait for our mistakes,” said Leno.

“We have to be focused in every game and if it’s possible we need to win every game. Then we can get back to the Champions League.”

The win last night was relatively comfortable, but with just a one goal lead until Alexandre Lacazette sealed the three points in the 83rd minute, there was always the possibility that one moment could turn the game.

“We had to keep calm because Newcastle were waiting for one chance from a corner or a free-kick to score,” he said.

“Then it’s more difficult to score a goal and win, so I think the first goal was very important for us.

“We kept possession and kept playing the ball, which was the main reason we played so good.”

Was any injury information released for Xhaka and Kos?

Kos had a bruised foot, and xhaka had a slight groin issue… don’t think there is any word on time frames though.. hopefully both are being kept for Napoli game

Everton will definitely be a different challenge to Newcastle

We will need Granit for Everton.

Our midfield was still way too loose with passing and possession against Newcastle.

True, and that means everyone but particularly the defence as a unit. They are improving collectively, but you have to admit, from a pretty low base. The main weak link is, of course, Mustafi. He kept losing possession against Newcastle yesterday and I have real worries whenever he’s in the team because he’s so inconsistent. Frankly, the sooner he leaves in the Summer, the better.

Mustafis an odd one. I’m convinced that there’s an excellent defender in there but he just can’t get stop the little errors. Last night was one of his better games yet still he left sokratis and maitland Niles exposed several times.
His run before the awful cross was excellent too

He’s not the only one making errors.

The biggest chance to Newcastle came when Sokratis was over eager with a challenge.

He also made an equally risky pass back to Leno.

Monreal also slid in and received a yellow arguably conceding the free kick in a far more dangerous area.

BOTH Ramsey and GUendouzi also made more misplaced passes than Mustafi.

There were a number of excellent clearances by Mustafi and early intercepts but the same people critical of him and all too willing to put him under the microscope would conveniently not mention them.

He wasn’t losing possession. He misplaced a number of passes but they were forward passes to the strikers from deep. It is not a coincidence that the defense normally sends the ball to him to make these passes out. AND to put things into better perspective, BOTH Guendouzi and Ramsey (whom some AFTV commentators are creaming themselves over) made very poor passes. BOTH made more misplaced passes than Mustafi. The one dangerous pass Mustafi made was the hospital pass to Sokratis deep in our half. That was poor. BUT Sokratis also made an undercooked pass in similar area back to… Read more »

Watford away in between the Napoli games would be the big challenge.

We will need to exercise better control.

Still thought Ramsey and Guendouzi were giving away the ball too much. The latter slipped or was robbed off the ball way too many times.

Granit needs to come back in to exercise better authority.

Leno is a revelation, having dislodged Cech as the #1 keeper.