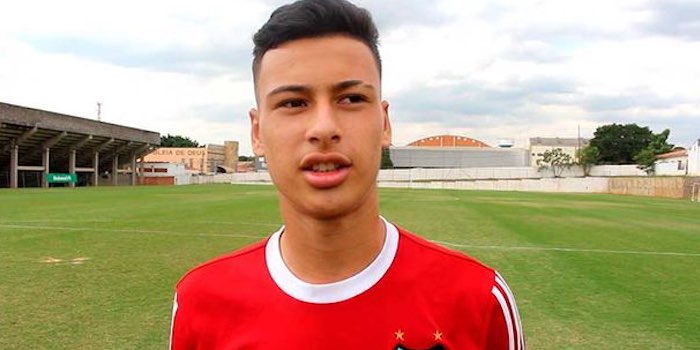 According to a report from UOL, young Brazilian Gabriel Martinelli is on the verge of completing a move to Arsenal.

The 17 year old forward currently plays for Ituano in the Sao Paulo state championship, and has travelled to Europe to obtain the Italian passport he’s eligible for via his father.

Arsenal very close to signing Brazilian wonderkid Gabriel Martinelli. The 17-year-old has traveled to Europe to sort out the final details and issue his Italian passport. He was named Sao Paulo league best newcomer but missed the ceremony last night https://t.co/uR3nYpYAwi

The Gunners have apparently seen off interest from other Brazilian clubs like Flamengo and Cruzeiro, and the deal is expected to go through in June when he turns 18.

The player has been linked consistently us over the last few months, and it appears as if there’s genuinely something happening here.

The European passport allows him to join without the need for a work permit, or for Arsenal to pay a significant fee.

According to our Brazilian football expert Tim Stillman, Martinelli played in the Copinha in January, an U20 tournament which attracts scouts from all over the world, and through which former Gunner Gabriel, and Man City’s Gabriel Jesus came to the fore.

Tim says: “He was one of the best players, so Ituano put him in the first team for the state championships (which run from late January to late April) and he did really well. 6 goals and 3 assists mainly playing against much better teams. He’s a wide forward.”

So, we’ll wait and see but a Brazilian wonderkid at Arsenal next season sounds pretty tasty indeed.

As far as he cant do worse than Mustafi!!!! Sign him up

Any footballer, other than Mustafi is welcome!!!!

It wouldn’t be Arsenal without a massive defensive liability on the books.

I quite liked eboue!

Me too but not for his football

Luzhny was immense in the FA cup final vs Southampton

Why are we talking about defenders when Martinelli is a forward?

Eboue shouldn’t be there. In his time with us he didn’t make more than 5-10 calamities. We are too quick to forget some players contribution.

Santos if not for fitness issues due to berbecue would have been great for us.

Eboue would be a starter on the right in this current side, no problem. He could beat his man and put in a cross, which is more than you can say about Mkhitaryan today.

Can’t help thinking that if he were a bricklayer he’d still have a chance of being better than Mustafi.

Saka, Emile, Nelson, Willock, this dude… Am I the only one who’s really looking forward to next seasons carabao cup?

True, but the Italian passport means he’ll develop with us rather than be farmed out…

Prospects are always a risk but you never find a diamond in the rough unless you look.

Reminds of chamkh (in looks), hopefully not in ability

One for the future, a future that gets farther away each year.

But how many poos?

From my time at the Copacabana festival I’ve long understood that teenage Brazilians are always pretty juicy, and this is no exception.

Young players often move from Corinthians to Ituano. Edu clearly knows this kid well and would certainly be involved in a transfer I would imagine.

Martinelli is gonna leave our opponents shaken, not stirred.

5 years, 10 loans and 0 appearances later he’s back in Brazil. His YouTube compilation from his time at Córdoba keeps him forever in our hearts.

Italian passport so he won’t need to be loaned.

Thanks to make me laugh ! I read the scout team are sure of this futur success with us. Personally i’m rather skeptical about him, of what I could see on youtube from him. he uses his speed a lot to beat his opponents of Brazilian D4. It remains to see how, it will develop in the future with us knowing that he is only 17 years old.

I’d always thought we needed a Brazilian attacking player in the team. Every single team in the Top 6, bar us and ManU, has an attacking Brazilian. Look how well they’re doing. So, this should work. ??

Arsen got his Ashavin and then got his Brazilian, then Wayne needed The Tank!

How “well” should be defined here. Maybe top 5. And what are the Brazilians’ actual contributions to the performances? They aren’t setting the league alight

Is the Copinha exclusively for players called Gabriel?

“According to our Brazilian football expert Tim Stillman”
This part cranked me up ? Blogs you always find a way to make my days bright even when I’m gloomy

I know it’s unlike arseblog to actually have an expert in anything (other than Arsenal of course, no offence arseblog) but I’m pretty sure Tim does genuinely know a lot about the Brazilian league, he’s written about it in his blogs.

Tim is our local Brazilian expert.
He’s been there, he watches all their games, I believe he’s lived there for a short time, speaks Portuguese and even has a Brazilian wife (lucky sod).

Better the Devil You Know

Just a question as I’m not sure myself but…
Doesn’t he have to be 18 before we can sign him?
Chelsea have been done for signing 17 year olds.
I hope he’s got a birthday coming up.
Any one have any insight??

Dave Cee
Reply to  Better the Devil You Know

Did you read the article?..will sign when he turns 18 in june

Hope that an Italian passport will still be sufficient after the actual Brexit. Not so sure tbh.