THE LOWDOWN
Arsenal face Manchester City in their final match of the 2018-19 season with the pressure entirely lifted. They secured the league title with a 4-0 win in their previous match away at Brighton and will hoist the WSL trophy after the game. Pre-match, they will enjoy a guard of honour from a Manchester City side who completed a domestic cup double with a 3-0 win over West Ham in the FA Cup Final at Wembley last weekend.

In fact, City, who beat the Gunners on penalties in the Conti Cup Final in February, could complete an undefeated domestic season if they avoid defeat at Meadow Park. City will be motivated to put a marker down for next season and preserve their invincible season, but Arsenal too will want to show they are worthy champions in front of a sold out crowd.

City had the better of the Gunners in Manchester in December when Arsenal’s injury crisis was such that 17-year old Paige Bayley Gayle started the game- her first ever taste of first team action. Montemurro’s side are in better health this time around and off the back of a 9 game winning streak, with the pressure lifted from their shoulders. These two teams cannot and do not do low tempo, friendly affairs.

The match also pits PFA Player of the Year Vivianne Miedema against Football Writers’ Player of the Year Nikita Parris. Miedema has almost certainly done enough to win the Golden Boot, with 22 goals to Parris’ 19. Miedema has 10 assists to Parris’ 7 too- assists are used to determine who wins the top scorer prize in the event of a tie. Parris will need one hell of a performance to take this trinket from the Dutch striker.

TEAM NEWS
Arsenal will be without Pauline Peyraud-Magnin who is not quite ready to play following a knee injury, but she has been included in France’s World Cup squad. So Sari van Veenendaal will start in what will almost certainly be her final appearance for the club. Tabea Kemme has been given the rest of the season off after a gruelling rehabilitation from knee injuries, while Jordan Nobbs will not recover from her ruptured cruciate ligament until the early autumn. Lia Wälti (knee) is out.

With the pressure off, Montemurro might be tempted to give Danielle Carter her first start of the season following 5 substitute appearances after her return from an ACL injury. Likewise, Viki Schnaderbeck might be considered for her first start for the club. Emma Mitchell hasn’t played since February due to an ankle problem and has been an unused sub in the last two matches.

LAST TIME OUT
After a 0-0 draw after 120 minutes at Bramall Lane in February, Manchester City won the Conti Cup via a penalty shootout against the Gunners in February. Back in December, two Georgia Stanway goals gave Nick Cushing’s side a 2-0 victory at the Academy Stadium. The teams last met at Meadow Park a year ago this weekend, winning 2-1 thanks to goals from Danielle van de Donk and Beth Mead in what proved to be Heather O’Reilly and Alex Scott’s final games for the club.

PLAYER TO WATCH
Joe Montemurro spoke effusively after the Brighton game about the adaption Irish centre-half Louise Quinn has undergone under his stewardship. “When I came and I saw Louise Quinn, they told me that she’s just a typical defender that wins the ball, and just plays it long and plays it into channels and stuff like that. I said, ‘This ain’t going to happen the way we’re going to play.

In a season where Arsenal have scored 69 goals (nice), a decent illustration of Leah Williamson and Louise Quinn's contribution (defensively and in making the play from the back) in the recent Everton game. https://t.co/wlEljWi4am

“The growth of Louise, I mean I think she’s got the highest pass percentage in the WSL in terms of completed passes. OK, a lot of it is preparing for us to go forward – fair enough. But she’s unbelievable. She’s a ball-playing centre-back now. Plus with the attributes in the air, plus the tackling, plus the positioning… In 12 months she’s developed into a world-class defender.”

Quinn is still a defender that loves to defend and she will need to be against City, who will pack more of an attacking threat than the majority of the teams that come to Meadow Park. With the quick silver Nikita Parris and Georgia Stanway upfront, City will play on the break and look to break in behind the centre-halves. Quinn will need to be alert to this threat. 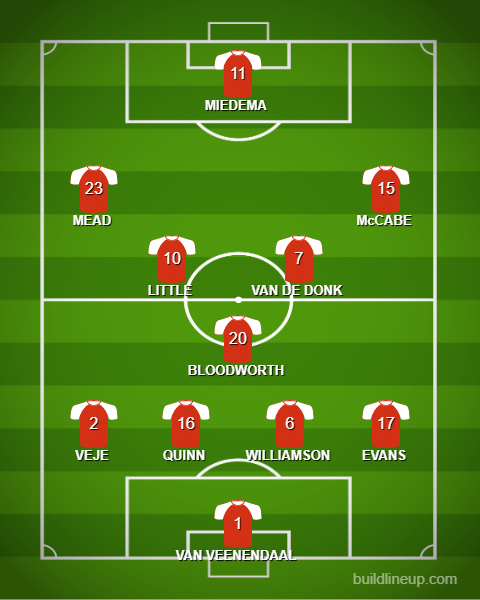 HOW TO CATCH THE GAME
The match is now sold out, so there will be no tickets available on the gate. However, the game is being screened live on BT Sport 1, kicking off at 12.30pm on Saturday.

COMING UP
Next week we have a special edition of the Arsenal Women Arsecast for you, we travelled down to Colney earlier this week to chat with Joe Montemurro about the season, the foundations he has set since arriving, his tactical philosophy and his summer plans. That will go live next week.

We will also have exclusive player reaction on site on Saturday afternoon and our May feature interview will go live towards the end of the month. And for the summer, well, let’s just say we visited Colney this week and stocked up on some lovely, steaming hot content to tide us over for a couple of months….

Yeah we’ve got a whole summer’s worth of podcasts and YouTube vids sorted…. pic.twitter.com/wjni50eFTP

Be interesting to see how the intensity levels are for this one. There’s some bragging rights to take into next season, but also a World Cup to not get injured before in a meaningless (so far as the table’s concerned) match.

Can’t make up my mind about whether not letting ManC hv an unbeaten season is better or winning the league in the season that ManC went unbeaten!!

Following AWFC this season has been as exciting as ’71, ’89, ’04 a complete re-kindling of a life-long passion. Thank you ladies..
Today’s game is a lovely way to end the season with the lifting of the trophy although now tinged with slight sadness with the knowledge that two of our Dutch Masters are to leave us. Thank you Dom & Sari. You’ve both been fantastic for us.