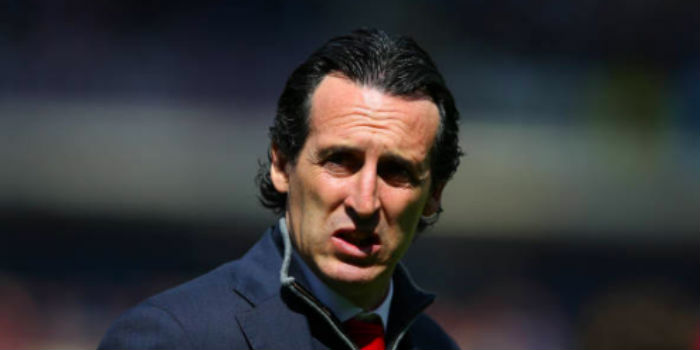 Unai Emery says Arsenal will do everything to ensure Henrikh Mkhitaryan is part of the squad to face Chelsea in the Europa League final but that a resolution is yet to be found.

The Gunners are awaiting guarantees – not yet forthcoming – from UEFA that it will be safe for the Armenian, who scored in the final two years ago for Manchester United, to travel to Azerbaijan.

There are currently no diplomatic relations between Armenia and Azerbaijan because of a longstanding conflict over the disputed Nagorno-Karabakh region meaning our midfielder isn’t eligible for a visa. What’s more, there are genuine concerns that our midfielder’s presence in Baku could stoke anger from the locals.

After his side’s 3-1 win against Burnley on the final day of the season, Emery was asked if there had been any progress.

“Really, I don’t know what the problem is between the two countries but we are going to do all we can to have Mkhitaryan there. This issue is not sporting. It is not in my hands. I don’t understand what the solution is.”

Mkhitaryan’s potential absence isn’t the only Baku-related issue causing the club a headache. After our win against Valencia, it was confirmed that the Arsenal and Chelsea would only be granted 6,000 tickets each for a stadium holding the best part of 69,000. UEFA later justified the paltry number by claiming the country’s infrastructure couldn’t cope with an influx from abroad.

Asked about UEFA’s decision to pick a location on the farthest edges of their association’s boundary, Emery said, “I don’t know exactly [the reasons behind] the decision to play in one place or another place.

“I played one Super Cup [against] Barcelona in Georgia once, in Tbilisi three years ago. It was the same then – two teams from Spain travelling to Georgia to play in the Super Cup. The problem is for the supporters.

“I prefer to play closer to England, because we are two English teams and can move a lot of supporters to be with us. Three years ago, with Sevilla, we played against Liverpool [in the Europa League final] in Switzerland.

“The stadium was full of our supporters and Liverpool supporters. It was amazing. I [haven’t really thought] about why they decided to play there. After, there are going to be 6,000 of our fans and 6,000 Chelsea fans. But the stadium has a capacity of 70,000.

“I think it’s going to be full, but [maybe not] with our fans and Chelsea’s fans.”

Honestly, we expected a more critical statement from Emery, but perhaps he’s not interested in ruffling feathers as his players turn their attention to the big game.

To Englishman in New York?
I don’t go to games anymore and miss the songs!

Just another reason to hate politics…

These far off nations with no infrastructure is so corrupt. They clearly just give the football association where the game is a ton of tickets which they resale for 2-3k per ticket and make a fortune, which they backhand to the people who pick the stadium place. UEFA and FIFA are still so corrupt

We wouldn’t have reached there.

Probably wouldn’t have seen it.

Absolutely, without Ramsey our midfield options will be very thin, having Mhki over there is very crucial

I wouldn’t take him even if UEFA say they will guarantee his safety. I think it is too dangerous for him.

I don’t understand the thumbs down. There’s just so much Uefa can do. World politics is bigger than uefa and whatever assurances uefa can give I suspect wouldn’t go be air tight.
Mhki’s safety should Trump our need for him as a footballer In Baku. I’d rather we don’t take the risk. Besides, when you think of the domino effect an attack on him can stir up, we just have to manage without our Armenian.

The point is, UEFA should have never booked the final to be held in Azerbaijan in the first place. When they’re considering venues for finals the ruling should be that, if there are any sort of embargoes going on between nations, or international relationships are so frayed that players from certain countries are banned from passing between boarders due to safety reasons. Then those locations should automatically be ruled out of hosting any sort of tournament. Because football is for everyone. Anyone from anywhere should be able to play. Not to mention the whole thing makes a complete mockery of… Read more »

A Different George
Reply to  IamaGoober

I do think you may need to look at a map.

IamaGoober
Reply to  A Different George

Sorry — got my wires crossed there, its Turkey which borders Syria.. not Azerbaijan…

Ironically I did alright at Geography during my school years — mind you that was a long time ago now.

I mean far eastern Ukraine is a effectively war zone. Does that mean we can’t play in Poland, Hungary, Slovakia, Romania, or even western Ukraine? Bordering a country shouldn’t have any impact, it’s not like they are going to be invaded mid-match.. The problem is that only Istanbul, Seville and Baku bidded to be the host for this year, and Seville couldn’t host as the CL final is in Madrid and both can’t be in the same country. Istanbul was given the Super Cup instead, and would clearly be preferable, although Turkey is hardly without issues at the moment. It’s… Read more »

I mean of course you want all your assets available for a big game. BUT if it is truly some sort of security issue, best not to tempt fate. Not worth it. Iwobi excellent today by all accounts which is another positive and option. Also good to see Willock take his chance. He is underrated IMO. BUT we may yet need another CMid next season regarless. Elneny (if we can sell him) should leave. Torreira isn’t full package even if he has plenty of merits, Guendouzi still on a learning curve but high promise. Granit despite criticism by some simplistic… Read more »

Dude, quit already with the Mahrez moaning. We never could have gotten him.

We would never have paid Leicester the 90 million pounds they demanded to sell him that January (and never wavered from come hell or high water), nor would we have paid him the wages City have him on. And he never would have wanted to come here.

Yeah Mahrez to arsenal was never gonna happen!!! Personally I don’t think there is much point in going over and over the mistakes the club have made (not selling Sanchez and Ramsey when we could/should and giving Ozil a crazy contract), but lessons do need to be learnt and certain players need to be got shot of – Mustafi, Ozil and/or Miki

I had a dream about this a couple of nights ago, there was a big protest outside our hotel all through the night before the final, the players didn’t get any sleep and the Army were called in to remove the crowds, but we still won 4-1

Have you voted for the goal of the season? I’ve for Ramsey’s, as parting gift 🙂

I don’t think he should go.

If Mikhitaryan turns up in Baku than straight away you have two problems. First his personal safety and second the massive distraction that it will cause to the preparation and the game itself for out players. That’s why he didn’t go earlier in the season.

Shame in Eufa for picking Baku as a venue for a major European final knowing that this situation could come about.

Maybe they expected Bate Borrisov to qualified instead of us

Trying to figure out if Fats has become more reasonable over the years, or if I’ve become more cynical…

Yeah, Carbs are the #1 enemy these days.

If UEFA cannot guarantee the safety of the players then the game has no right to be played at that venue, simple as.

Move the damn venue. Hosting it in my town of Toronto makes as much sense as Baku…

Why can’t Uefa or Fifa find any people who aren’t morons to guide their associations?

Chelsea fans can’t compete against us canadian gunners. It is like one Chelsea fan for five gunners.

It’s a travesty they’re holding a final in a location where they can’t guarantee the safety of the players. The final should be moved unless the Azerbaijani government is willing to make a statement guaranteeing Mhki’s safety. It’s honestly a disgrace that Arsenal is rolling over so meekly on this. I don’t blame Emery because it’s not his call but the abject silence and cowardice of our club’s so-called “leadership” is both depressing and entirely expected.

Apparently Armenian sportspeople have been allowed to travel to Azerbaijan before. Does anyone know how they have fared / if they got any abuse from the public?

I don’t really know anthing about the situation or how dangerous/intimidating it might be for Mkhi.

As captain of the Armenian team he’d probably be the mostly high profile sportsman in a long time. It does make him a significant target

So it sounds like Armenian athletes in the 2015 European Games in Baku got a lot of abuse from crowds and found it a difficult atmosphere:

I wonder if locals would support Chelsea for this reason, making it more of an “away game”

Might be controversial to say. But I do think if it was say, Aubameyang’s involvement in question, we the fans would be more worried, and probably the club would be seen to be taking a less laissez faire attitude. The whole situation if a farce and I’d like to see more bite from the club.

Managers can barely even mention the officiating in the league without being punished. There’s really no point trying to take on the authorities, the best you can hope for is indifference.

February 19, 2004. Armenian citizen Gurgen Margaryan, 26 years old, was hacked to death while asleep by Ramil Safarov, a Lieutenant of the Azerbaijani Army. Both were participants of an English language training course within the framework of the NATO-sponsored “Partnership for Peace” program held in Budapest, Hungary. The murder occurred at 5 o’clock in the morning, while the victim was asleep. You can read the shocking details: http://budapest.sumgait.info/murder.htm After all the killer was sentenced to lifetime prison in Hungary, but the authorities let him spend the punishment in his home country. Arriving home the killer was immediately set free… Read more »

What a messed up world we live in

We all want to play with our Mickey in Azerbaijan.