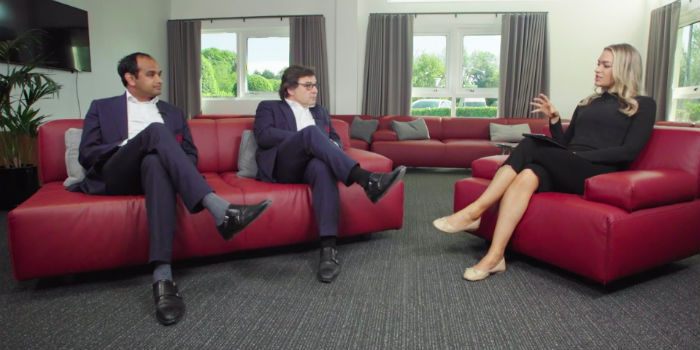 Vinai Venkatesham and Raul Sanllehi say they are very pleased with Unai Emery’s debut season at Arsenal even though the club missed out on automatic qualification for the Champions League in the final weeks of the season.

The Gunners looked well-placed to nab fourth place in the table before an ill-timed four-game winless run upset momentum and saw us drop to fifth. On the plus side, hope lives on in the Europa League with the club currently preparing for a first European final since 2006.

Beat Chelsea in Baku on 29 May and Emery will have achieved his aim for the season and, in the process, should secure himself a bigger transfer budget with which to continue reshaping the first team squad.

Reflecting on the Spaniard’s first year at the Emirates and the change in operational structure, managing director Venkatesham told Arsenal.com, “This has been a season dominated by change. We’ve gone from 22 years with Arsene Wenger to Unai Emery. But it’s been more than a change of the individual, it’s been a change of our model.

“We’ve had Per Mertesacker taking over the Academy and Ivan Gazidis leaving us for AC Milan and Raul and myself stepping up into our new roles. There’s been lots of change.

“Within that change we’ve set objectives for the season. If you boiled it down to two objectives, they would be, one – to successfully integrate Unai and his coaching staff into Arsenal and the second, as challenging as we knew it would be, to qualify for the Champions League.

“If you assess our season against those two objectives, with Unai the best way to assess that [is to ask], if we went back in time, would we make the same decision?

“I can say, absolutely, 100%, categorically, we would have appointed Unai again. We’re really pleased with the impact he’s having at Arsenal and we’re delighted with his appointment.

“With the Champions League, obviously the primary way to get there is through your league performance. All of us at Arsenal, Unai, ourselves, the players, the staff were naturally really disappointed that we didn’t quite make it into the top four places.

“I guess, you can reflect on that in one of two ways. You can either look back with a half glass empty at some of the missed opportunities that we had along the way to get the few points we needed. Or you can look at it, half glass full, that we were incredibly close to getting there. The reality is we didn’t get there, so we’re very disappointed.

“We’ve got plenty to look forward to, including a European final which gives us the chance to win a European trophy and the chance to get back in the Champions League. Everyone here at Arsenal is hugely focused on that game in Baku and giving ourselves the best chance to be successful. We’re feeling very confident about the game.”

Raul Sanllehi went on to add, “We were very careful, the moment was very important. Arsene Wenger’s shadow was huge. We have the highest respect and appreciation for him and all the things he did. Arsenal would not be where it is without that manager and the great things he did.

“Coming after that big legend was a challenge. When we were looking at different options, analysing the possible candidates to become our head coach, we defined a series of dimensions they had to cover. The way we play football, looking at youngsters, developing players, tactics etc.

“Another thing we were looking for was courage. It had to be somebody with big courage, big passion to take that challenge and do it properly. Unai has achieved that. He’s a man of courage, a man of passion and he’s been demonstrating that over the whole season.

“We knew that already, but you never know that completely until the person gets into the job. I think from the first day he’s been proving this and all through the season with the players, with the fans, with us, with the staff, so yes, I agree with Vinai, if we had to do it again, we’d do it the same way.”

Please tell me that photo has had the usual Arseblog photoshopping? They dress the same, they sit the same, and they think the same… Glad to know there’s a diverse set of minds using all angles to improve our beloved AFC… ??‍♂️

SB Still
Reply to  Leno me, I’ll be your friend

Vinai ““I guess, you can reflect on that in one of two ways. You can either look back with a half glass empty at some of the missed opportunities that we had along the way to get the few points we needed. Or you can look at it, half glass full, that we were incredibly close to getting there. The reality is we didn’t get there, so we’re very disappointed.”

Raul “We knew that already but you never know that completely until the person gets into the job.”

Seems like they even contradict themselves but not each other!

bob
Reply to  Leno me, I’ll be your friend

Don’t be silly, they dresses completely different! Can’t you see they have different coloured socks, see Vinai’s got the dark grey and Raul’s got the black.

Outrageous display of individuality and creative thinking I know, but cut them some slack ?

They’ve used a lot of words to say nothing

If he takes Mustafi off our hands.. the guy is a martyr

The only thing I got out of this interview is that Arsene Wenger’s shadow was huge.

Just when you thought you knew him well. I have to say I didn’t pay attention to it but picturing it fumbling with the zip will surely help me pass the time till the final.

Bit of a snorer.

And who ate all the ties?

About what you’d expect any non-playing management team to say. Especially as the season isn’t over yet, so they don’t want to make waves that could cause problems…

exactly, dont be fooled. it’s straight out of the gazidis playbook.

They’re all the same. What do you expect.

They’d be foolish to put their necks on the line.

These are the two, along with failson Josh, that Kroenke thinks will steer the club in the correct direction.
Decisions made this summer will be made by these two and Emery (plus his staff, surely). Will Emery be hung out to dry entering the final year of his contract? This summer, and next season, will tell us a lot about KSE’s ownership and which direction the club are headed.

Only comparing to the past when there isn’t much tangible, data backed evidence that we have moved forward. The only tangible data we have is league position and points. And we have fallen short.

Not one mention of inadequate timing of contract renewals or aquisitions including useless loans and the multimillion pound fee.

Going forward into the transfer window and final and you drop this PR spin on us just before the critical bit of the season?

I remember when Arsenal won the Premier League and was the best team in England. I wonder if they do?

It’s interesting, in that nothing is said. I mean honestly, what can they say? Blame it on Emery, when we lost 3 key squad players and only got Denis Suarez in? Can’t pin that on him.

In truth, this is a nothing piece. Josh Kroenke is the one I want to hear from. By all accounts it seems he’ll be/is the executive chairman, which means he’s the real boss here. What’s he got to say?

Coy on the transfer kitty?

Transfer Kitty won’t be confirmed till after the finals.

What do you expect?

We don’t even have a Mslintat replacement in place. That’s a better question to ask.

The point of all this is to support Emery. I think it’s good for people to really think about the challenge Emery has had: walking into a club where Wenger had tons of power and his “stamp” on everything, pulling off a long win streak early in the season, managing problem children, and not just gaining a bit of ground—-would it have not been understandable for him to LOSE ground in his first year?—but getting us to the EL final. I’ve been disappointed in the lack of perspective and positivity from this blog about Emery. Love the blog and podcast,… Read more »

If they really want to push the club forward, the best spend we can make this summer is to get someone with track record, experience and competence like Luis Campos at Lille OSC (formerly at Monaco)

But that may play into Sanheli’s insecurities, he prob wants someone he can control better like the inexperienced Edu.

The wise thing to do is to kick him upstairs, shift Vinai sideways.

Neither one has really filled in the leadership role of Gazidis. at least with Gazidis, there was someone-else to spell out our direction.

Its all very opaque now.

Couldn’t agree more. Bear in mind Emery hasn’t had one full operative window in which to work. He’s tried every possible permutation to squeeze value out of this sub-standard squad. We’re in a final and we were very close to top four (gutted at the late collapse) and I really think he’s done a good job, all things considered.

More than deserving of fans’ backing and another year.

Emery has done a good job this season, but not good enough. He needs to improve next season, and he might not have many resources aside from burgeoning youth with which to achieve it (he got a handful of new starters this year, but I don’t think he’ll get as many next). He’s got a tough job ahead, and he’s got the support of the fans and management, but he needs to feel the pressure to make this team much, much better. I don’t think there is any sense in sugar-coating anything — we improved by 7 points but still… Read more »

As expected, we won’t have a transfer budget confirmed until we know the results in Baku. A lot lie on the Europa cup this season. Win it and not only do we have more money to play with, but Emery’s first season would be deemed an improvement over the last 2 Wenger years. …but miss and it would be extremely incremental progress at best complicating our rebuild this summer bc of lack of gumption on part of those above Emery. No Technical Director in place as yet either. This is something the club should not need to see the outcome… Read more »

So, this is what fans are getting instead of an AGM?

Pshh, most of you guys expected not to be in the top 4 at the start of the season. I understand the frustration at losing the spot by 1 point but to direct the ire at Emery is premature. Whether you like it or not, Arsene’s shadow was huge. The squad left was imbalanced, and key players were struck with long term injuries at bad times. So I understand why he was gambling with formations to try and find some sort of balance. We still have our FIRST EUROPEAN FINAL after 13 years and again I must point out most… Read more »