Valencia 2-4 Arsenal: By the numbers

Arsenal are going to the final!

It got nervy for about 5 minutes but after that it really felt pretty good for Arsenal. I know we all just witnessed two amazing comebacks but this one never really felt like it got to that point and Arsenal were always able to respond when Valencia looked like they might have made a match of things.

Now Arsenal have a cup final to look forward to, even if the actual match against a London rival might be torture.

Valencia 2-4 Arsenal: By the graphs 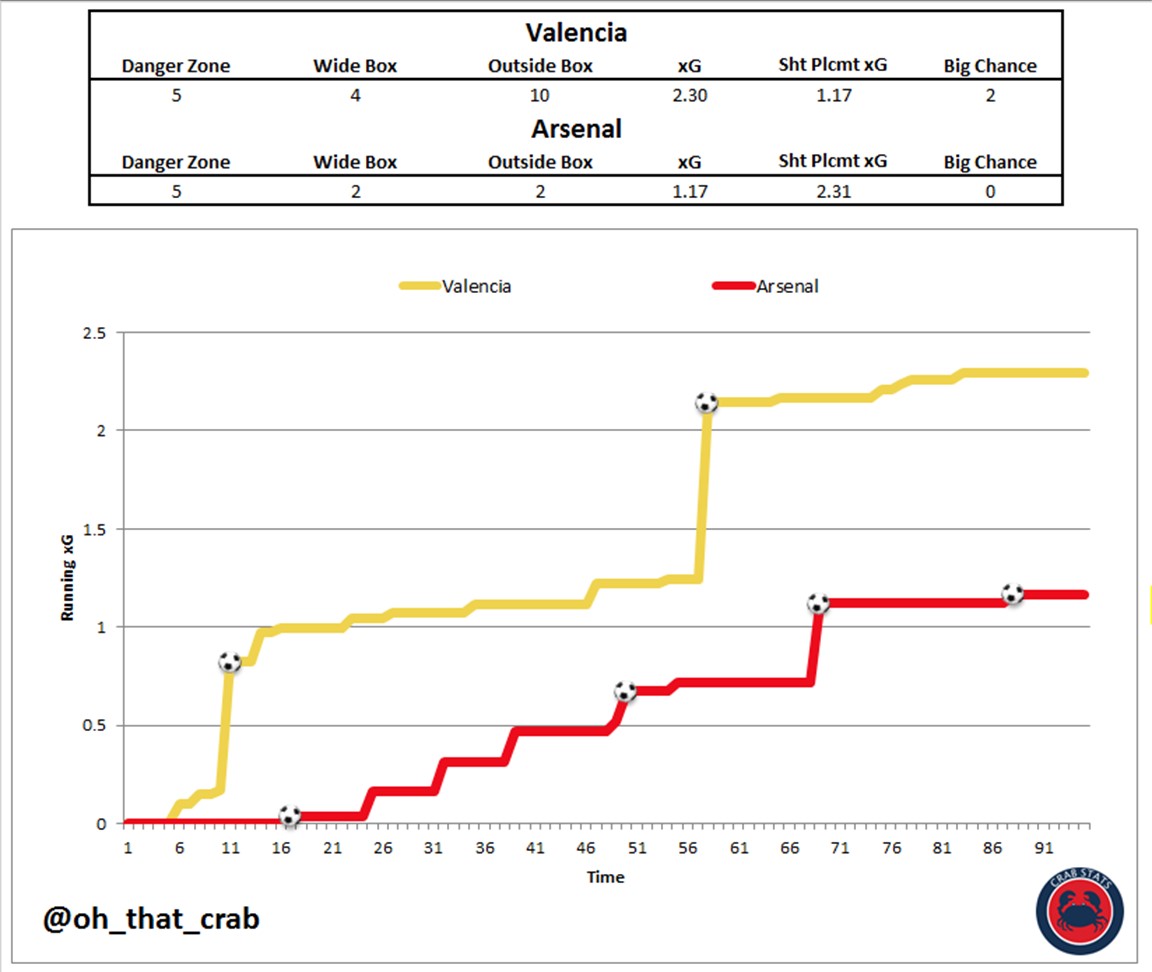 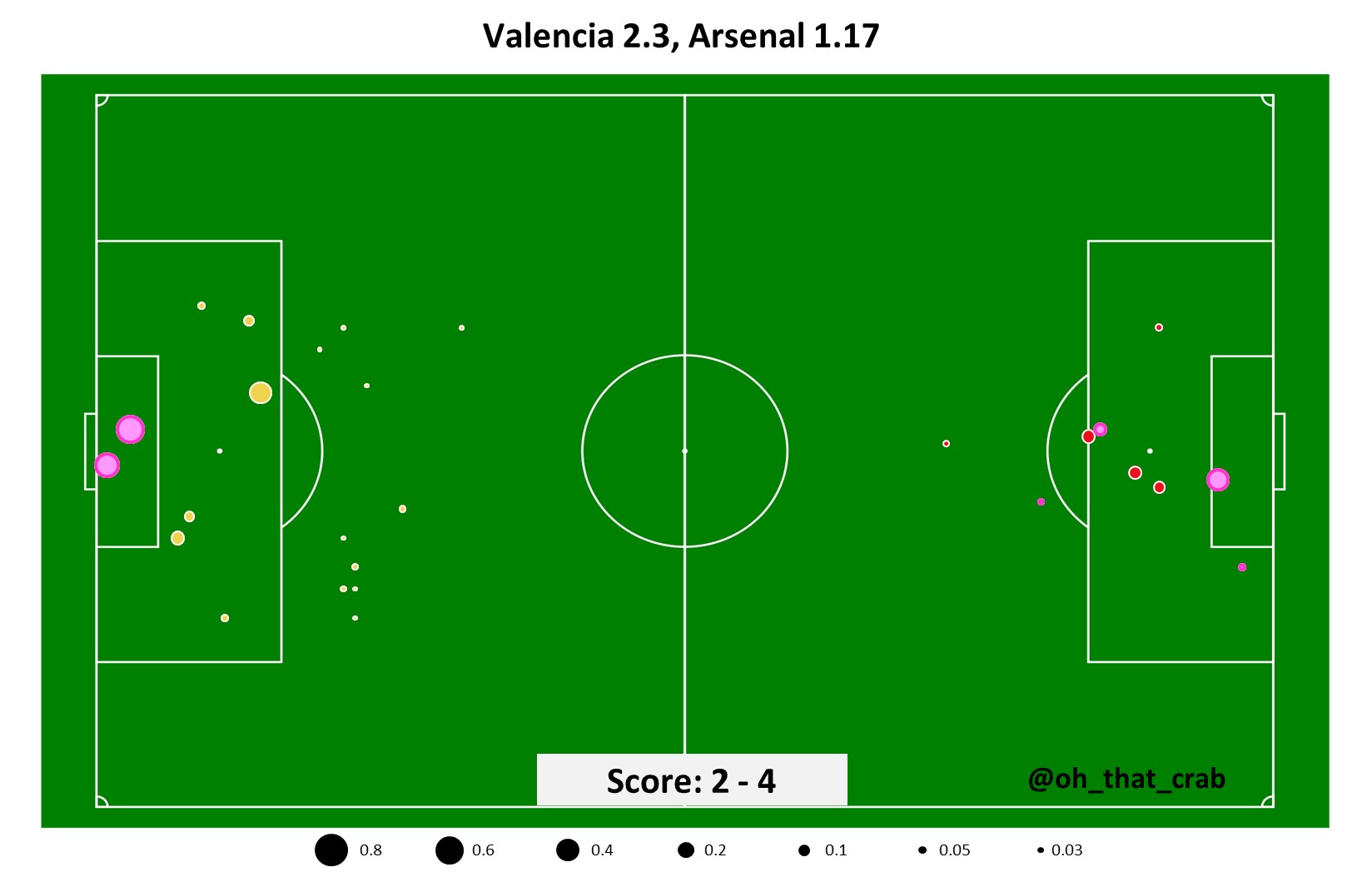 xG for both legs Valencia 2-4 Arsenal: By the numbers

18 – Shots for Valencia, of which 3 were on target and 2 turned into goals (both big chances).

9 – Shots for Arsenal, of which 5 were on target and 4 turned into goals.

30 – Shots for Valencia over both legs

27 – Shots for Arsenal over both legs

6 – Shots by Pierre-Emerick Aubameyang, of those 4 were on target and 3 turned into goals. The 6 shots led all players and were 67% of Arsenal’s total

2 – Shots by Alexandre Lacazette, of those 1 was on target and turned into a goal.

9 – Shots over both legs by Aubameyang, of which 5 were on target and 4 turned into goals

8 – Shots for Lacazette over both legs, of which 5 were on target and 3 turned into goals.

I am going to share some crazy knowledge here: Having two amazing strikers is very helpful and can really help a team that might be weak in other areas win matches that otherwise might have gone the other way.

In all seriousness, these two matches really showed what having two very good goal scorers can do for a team. This Arsenal team is very flawed but it is going to do something that other arguably better more rounded teams couldn’t and go to and have a chance to win a European Cup final.

The strike duo accounted for over 63% of Arsenal’s shots in the tie, 100% of the goals and are the biggest factor Arsenal are advancing. What these two players did was also paper over Arsenal’s inability to create high quality scoring chances, both were incredibly efficient in taking decent chances and turning them into goals. Aubameyang scored 4 goals from and expected tally of 1.6, and Lacazette scored 3 from 2.3 expected.

I’ve banged hard on not loving getting out shot repeatedly this season but sometimes you can over come that purely through having better players. It’s not the greatest long term strategy but in a cup competition it sure can work wonders.

56 – Long passes attempted by Arsenal, completing just 14. Of these 35 came from Petr Cech and he found an Arsenal player with just 8 of them. This wasn’t a match that Arsenal looked to get cute and play out from the back.

62% – The percentage of forward passes completed by Arsenal.

82% – The percentage of forward passes completed by Valencia.

72 – Attacking third passes completed by Arsenal. Arsenal were led by Granit Xhaka and Sead Kolasinac with 10 each. That would have ranked 8th among Valencia players

5 – Completed passes into the Valencia penalty box, led by Lacazette with 2.

28 – Completed passes into the Arsenal box by Valencia.

This wasn’t a vintage Arsenal performance where Arsenal successfully pinged the ball around in pretty triangles. With a two goal lead it didn’t need to be but it is still a bit shocking to see Arsenal get so heavily out passed in matches. However when you play a pragmatic style, the result is the ultimate measure and Arsenal got the results.

11 – Tackles for Arsenal, led by Ainsley Maitland-Niles and Kolasinac. Daniel Wass led all players with 4.

14 – Interceptions for Arsenal, Nacho Monreal led all players with 5.

28 – Clearances for Arsenal, Sokratis led all players with 6, Valencia as a team had just 5.

This wasn’t a high pressing, high intensity defensive match for Arsenal but it got the job done. I think that a lot of what happened defensively in the statistics was down to score effects. Valencia found joy in the space behind Maitland-Niles early but towards the end of the second half that area was tightened up. After Arsenal scored their second they mastered the bend but don’t break defense that played into their scoreline advantage.

Sources: Opta via WhoScored, StatsZone and my own database.

Brighton 2-4 Arsenal: By the numbers

The only thing I can think of is, if we lose on the day to Chelsea, at least we’ll be able to see spurs lose the CL final 3 days later to cheer us up.

I just hope we win, but anything can happen. Please God give us this!!!!!!!

After last night I was ready to play anybody at the finals. The devil you know they say is better than the angel at the corner (Chelsea we know Frankfurt might seem easier but can blow us away). Emery is proving he is the Europa league Chairman. I’m so full of confidence

Raw data doesn’t prove much. You can pass a lot or run a lot but still be ineffective.

And according to Unai no team this season has put 4 past Valencia…Athletico the closest with 3.

Can we put 6 past Burnley (plus clean sheet) on the weekend…hope Everton do the numbers and paste 2 past Spurs no reply?

A Different George
Reply to  GraeB

Theo to get a hattrick, then carried off the pitch holding three finger up on one hand and a fist with the other. Followed immediately after the whistle by a tweet from Wojciech Szczesny singing “It’s happened again.”

Defintely Aubas best game for us.. Him and Laca really put their all in.. Good to see some fight from Özil but he really didn’t do much for us.. Hopefully he brings his A game for the final.. Need to get more control in the midfield.. Feel more confident about playing chelski rather than franfurt..

The mickster
Reply to  Carlos _ Santana

One thing i always hate about this xG stat is how it assumes the one that take the chances are your average player. Elite strikers should always outperform their xG. Saying things like auba and laca outperforming their xG is not sustainable is a bit daft since they are not your average strikers.

The stats show two things.
1. We lack the right players in midfield, both in skillset and attitude.
2. Our lack of proper pressing game ( partly related to 1.) will at one time hurt us bad when our top strikers can compensate.

I also fear that sports directors in big clubs now targeting Auba and Laca. A hard working Laca replacing Suarez in Barcelona? No brainer for me.
Forwards who score goals and create their own chances are a rare commodity and we got the best there is.

Get the stats ready for our SuperCup match in August v Liverpool.

You mention us not playing out from the back and Cech kicking long but it was wrecking my head seeing us play it from midfield back to defense and then Cech when all he can do is kick it long. Sometimes the short forward pass from midfield is the safe option especially as Cech is only going to kick it back to them and it can go to anyone. Worse still hr could fuck up and scuff his kick. Not just last night’s game either

Hiya, what about that shot from AMN, just before their goal ??

btw
Reply to  The Mickster

yeah, he was partly to blame for their goal with that weak shot, allowing their keeper to start the counter attack right away

what happened to the expected win charts? I guess that based on xG it would have been going for Valencia, but I never felt they looked like winning

In all the Arsenal games that I’ve seen, I’ve never seen Ozil tackle anyone. A couple of times a game, he’ll run back, stand in front of an opposing player, and then back up for awhile. But tackle someone …. can’t remember it ever happening. Are there any published stats on the number of tackles attempted per player?