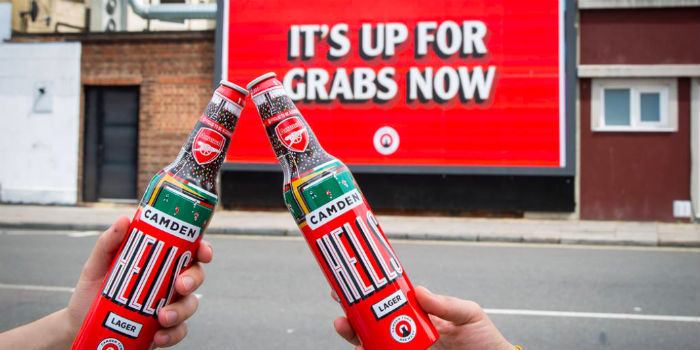 Arsenal have confirmed that Camden Town Brewery will be the club’s official beer partner for the next three seasons.

In the booze equivalent of adidas replacing Puma, the local brewery – makers of Pils, Pale, Hells and Gentleman’s Wit – takes over from Carlsberg.

The craft beer aficionados may have been swallowed up by global giant AB InBev a few years ago, hence their ability to do deals like this, but you can’t help but love the enthusiasm of founder Jasper Cuppaidge, who is a lifelong Gooner.

Speaking to Arsenal.com he said: “If you’d have told me 10 years ago that the beer I was creating in my basement in North London would one day be the beer of Arsenal Football Club – the club I love – I would have thought you were crazy, but I would have loved the idea of it!

“The partnership with Arsenal marks a huge moment both for me and for the entire team at Camden Town Brewery and we can’t wait to share our great beers and a better beer experience with all of the supporters like myself.”

We’re so excited to announce Camden as the official beer partner of @Arsenal FC. North London is red (+ it's thirsty!)

To toast the news, Camden is running a competition to win a couple of season tickets and a season-long beer tab…you might have to wait a bit though, as the traffic from the club’s official site appears to have crashed their website.

Jasper, if you’re reading, the Arseblog News team likes your beer and will happily drink it for free.

No idea about the financial side, but supporting local businesses is a great way forward.

It’s a subsidiary of the world’s largest brewer. It was local once…

Surely they are supporting us (with money). We are advertising them in return for cash. Hardly us being kind to a “local” (cough) business.

“When I drink Gentlemen’s Wit I initially feel an overwhelming calm, I let everything pass me by and I just soak up the relaxing feel of tranquility as those around me rush on in the hectic rat race of life. …After a few bottles, well, I end up sliding around on my ass giggling like a school kid and shouting harsh things at the nearest people I care about. Ultimately, it’s what gives me the sporting edge!”

Mesut O’Neill
Reply to  Leno me, I’ll be your friend

The same guy that wouldn’t do a press conference with a bottle of beer on the table due to his religious beliefs.

Leno me, I’ll be your friend
Reply to  Mesut O’Neill

I wasn’t actually being serious, mate ?

You got a problem with that?

Mike1
Reply to  Leno me, I’ll be your friend

Oh fuck Shkodran, you’re on your arse shouting at the bar staff and we’ve been kicked out. Again. And you haven’t got your round in. Again.

best news of the (football) summer.

No longer will I have to drink that cider at the stadium just to avoid having to drink Carlseberg 3.4% piss water.

I fear the pricing though.

> No longer will I have to drink that cider at the stadium just to avoid having to drink Carlseberg 3.4% piss water.

It wasn’t just me then! I have to say that this is one of the best bits of business Arsenal has done this summer.

Finally – Something to get excited about in the new season!! I’ve had enough of that watered down Carlsberg rubbish!!!!

Continuing on the strong tradition of KSE’s beer pricing at Dick’s Sporting Goods Park… $9 for a 90 Shilling.

And only £25 for a half pint…
I’m please they’re getting a decent beer in but it’ll still be ridiculously priced.

Well, this is good news…. but if I may, why did it take so bloody long to serve a decent beer at the stadium!!??
The rise of craft beers has been going steady for over 10 years, yet we kept (keep?) serving the same Carlsberg sludge. Why couldn’t we have a nice beer!!?? It is a sign of how we’ve come to do things at Arsenal, and it’s present at all levels. Reactive rather than proactive.
Guaranteed this is a reactive response to Sp*rs selling nice beers.

Does it matter? Stop finding things to whinge about

No shit. It’s fecking tiresome really. At the stadium, watching the Arsenal, but I’ll moan about the beer. And once they change that. I’ll find something else trivial to moan about.

So what if it is a response to spurs selling better beer- that’s what good businesses do. They respond to rivals

This is the final straw. After everything else that has gone on lately we are now being told we are going to be drinking beer at the stadium that isn’t piss. It’s an outrage – is nothing sacred any more ??

Definitely an improvement on Carlsberg, but it’s a shame they haven’t hooked up with Hammerton who brew nearby. They’re a proper local craft brewery and run by Gooners afaik.

Just need to sort out the food side now as times have changed, not all fans want the same tired offering of burgers and hot dogs.

Nice to keep the association with Camden and The Arsenal. Really good beer (who ever owns them), from the market in London and always has been.
Shout out to the Gooners at Modfather if you are on here!

I wonder how this deal compares with larger brands. Either way working with local business is good (even if it’s not so local anymore)

Looks like #wecaredoyou message got delivered loud and clear to the Kroenkes.

Does anyone know how much the sponsorship brings in?

If that’s the end of the summer signings, I’m happy.

Fair enough. One area where we fall quite a way behind most of the other “big” teams remains commercial sponsorship – despite the recent kit deal. While I doubt this will bring much dosh to the club over the three years, everything helps. There’s a whiff of controversy though as it appears that Islington’s only beer firm, Hammerton, wasn’t approached at all by the club. Still, there it is.

The thing is that small businesses can’t necessarily provide the guaranteed supply vs demand. I remember when hells wasnt available anywhere beyond London- the buyout changed that

Any piss is better than carlsberg artificial piss. Probably the worst piss in the world. #emeryout