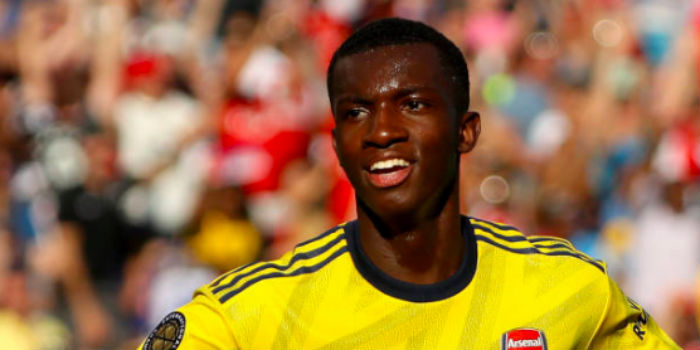 Eddie Nketiah says he’ll sit down with Unai Emery and his family when Arsenal return from the US to discuss whether he should undertake a loan move or spend the year at the Emirates.

The England under-21 international was promoted to the Gunners first team just before the squad jetted off to America and he’s since caught the eye with three goals in the friendlies against Bayern Munich and Fiorentina.

The boss has spoken warmly about the striker’s progress and said he’d like him to focus on pushing Alex Lacazette and Pierre-Emerick Aubameyang but it sounds as though the 20-year-old is still tempted by a season of regular football elsewhere.

It’s believed that Charlton Athletic, newly promoted to the Championship, have made enquiries and it’s expected that other clubs at home and abroad will do the same.

Speaking about his future, Nketiah told the Mirror: “There was talk of [going out on loan] and it was close to happening in January but the club decided that I should stay and I tried to finish the season as strongly as possible.

“After the pre-season tour, it’s something that I’ll look at with my family and speak to the manager and see what’s best for me.

“I feel like I have a great relationship with the fans. It’s nice that they notice that and sing my name. That’s a dream come true. Even out here the fans are screaming my name.

“They travel all around the world to see us play and support us. I always try to give them something back and I’m so grateful that they have taken to me like that as one of the boys from the academy and I hope it can continue.”

While I understand he’s dying to be playing week-in, week-out, there’s no rush. We need a 3rd choice striker and a versatile forward who can play LW or RW. Eddie can fulfil that squad role and as such it’s simple – stay and fight for your place.

I think young players rely on the loan option a little too much. Ultimately he’s worked to get an opportunity at this club and with only 2 senior strikers in the squad, this is the best chance any young striker could hope for at a club like Arsenal. Seize it.

I think loan spells work well for youngsters. Nothing is better than week-in-week-out competitive football for them.
I think Reiss Nelson is a better player today than he would have been if he spent last season understudying Mkhitaryan!

My Cousin Vinai
Reply to  Tim

I disagree. I want him to stay, but a big issue in the past with us is not developing players, particularly in the latter years due to not enough playtime. Youth need to play to develop; and though it may hurt us in the short term, the long term benefit means a successful loan could have him coming back and possibly battling for that 2nd or even 1st spot. It’s to the long term of the club. We’ve seen how little Chance he’ll get behind Lacca and Auba. Out wide, there are better young options to play there than him.… Read more »

Tim
Reply to  My Cousin Vinai

I see where you’re coming from but I think Emery and the club are talking about young players differently this pre-season. Last season Emery (i think foolishly) decided to play first XI players in pretty much all cup fixtures. This season we need to be cleverer and use first XI guys for league matches only, and let the youngsters strut their stuff in the FA Cup, Carabao Cup and Europa. I get the fans like winning those cups but I couldn’t care less – use it to give these kids the game time they want while resting up our stars.… Read more »

Yes, but while Emery is currently talking the talk, he isn’t following that through with the likes of , for example, Bielik who is on his way out. Albeit slightly older, Chambers also appears to be going as well after a loan (and he cost a reasonable fee, which we’re unlikely to recover in full). The proof will be what actually happens and only time will tell.

Keep in mind with Bielik we’re talking about a player who while he played very well, did so at a League 1 level. There’s a vast gulf between that and being a premier league player. Given Freddie has moved up to help Emery in terms of which young players are ready, there’s a very real possibility that Freddie/Emery simply think Bielik isn’t good enough to cut it at Arsenal currently/possibly ever.

True, in the event that we progress far in FA Cup and League, aiming to win them both next season, Eddie definitely will get his playing time to ensure Auba & Laca is not overworked and maintain injury free throughout all competitions. I hope this coming season will be a breakout season for him.

Hope to see a lot of action from Willock & Martienilli too..

He looks ready to me and we could do with another option up top so we don’t have to overplay the other two.

I say keep him.

In fact I think we should be trying to rotate some of the young guys in on a regular basis, and not just in the lesser competitions.

Up to a point. The vast majority of youngsters that are loaned out are loaned out because the club wants them to go, not because they do. The problem at Arsenal is that we have a very bad record of bringing back loaned players. Under Wenger, many went out – often to more than one club – and then were released or sold for a small fee. We never really got to see how (if) they had improved while away. Bielik is a more recent example and he’s on his way as he’s fed up.

That is true at Arsenal, unfortunately, but it is a completely misguided approach to developing players. Playing against children in the under-23 league doesn’t let them grow. They would be far better off playing actual games in actual leagues against actual footballers.
I believe most young players with ambitions of becoming first-team regulars realize this and desire those moves – Eddie being the most recent example.

I’ll start to worry about Bielik if and when a move is imminent, if then. All we’ve heard so far have been rumors and conjecture.

Agreed. Sending him on loan doesn’t guarantee anything, although if we can find the right club and most importantly the right manager managing that club, then it is a good idea if he can get 15-10 games in a season. However, many of our players end up being bench warmers and hardly get any minutes, affecting their confidence and losing out on valuable experience with the club. Let’s not forget, these experiences can be very educational on a personal level, but technically no club who we would loan Eddie out to would have the same level of training facilities as… Read more »

I would keep him around for at least the first half of the season. He’s got to be a starter for the Europa League and league cup. I’m sure if he performs well hell get Premier League time as well because we’ll have to rest Lacca and Auba at some point and I’m sure we’ll pick up an injury or two in the season. If he isn’t getting game time by January then let him go on loan.

Wow. This will be a staggering dagger on worth of Emery’s words. Nketiah feels like he can’t trust his manager.

lol where did you get that from?!

The Sun or The Express probably

This is next level of journalism

Perhaps we could send him up to Celtic for a season long loan as a sweetener in the Tierney deal?

Or to ASSE for him to get to know Saliba.

We do not win games early enough to replace our main strikers. That’s the problem. If Auba or Laca gets injured, we need a sharp Nketiah as the second striker.

Forget Zaha and the Brasilian striker, trust Eddie and Reiss! Young talented guys eager to make an impact in their club!

The cynic in me sees this response, in light of Emery’s recent praise of him, as a reasonable tactic to enhance a contract if he’s truly going to be playing first-team football all season.

Wow, Emery’s family has a say in team matters!
[Grammar nazi mode off]

To be fair, they probably speak better English than he does.

I like Eddie a lot. He has that hunger all good strikers have. His first against Fiorentina was excellent. If he is definitely going to get cup and Europa games this season I think he should stay with us.
Otherwise a loan in the Championship or higher would be good for him, provided he’s first choice at that club.

I’d guess UE will promise him some Cup games and anything beyond that will come down to the fitness of Laca & Auba. I’d prefer him to stay but luck will be a big part of how much game-time he’ll get. We had it with Afobe where pretty much every time he was needed in the first team he was injured.

What next to Everton transfer to Arsenal. Anyone with an update pls?

We don’t have the money to do deals with Premier League teams.

Unfortunately Usmanov beat us to it. We may have to get Coventry instead. ??

He looks good, and in fact, looked pretty good last season. Certainly ready for first team minutes in cup or EL.
Absent us getting a big attacking signing, like Zaha, which seems unlikely, I don’t see how we can let him go on loan. We’d be foolish to have just Auba and Laca. They have been pretty injury free so far, but one ding to either of them and suddenly we’d have a major issue.

Why is he sitting down with Unai Emery’s family?

Get ready for Eddie!

Keep him here. He has a nose for a goal and always finds a way to come up with one. I hope he keeps Nelson, Smith Rowe, Niles, and Willock in the mix. I always thought loaning Gnabry out to West Brom was possibly the worst move for him. Now look what he is up to. The wrong manager can screw with a players mentality and development. Game time doesn’t always equate to growth.

I think one more season on loan will be okay, that way he would be well prepared for the premier league