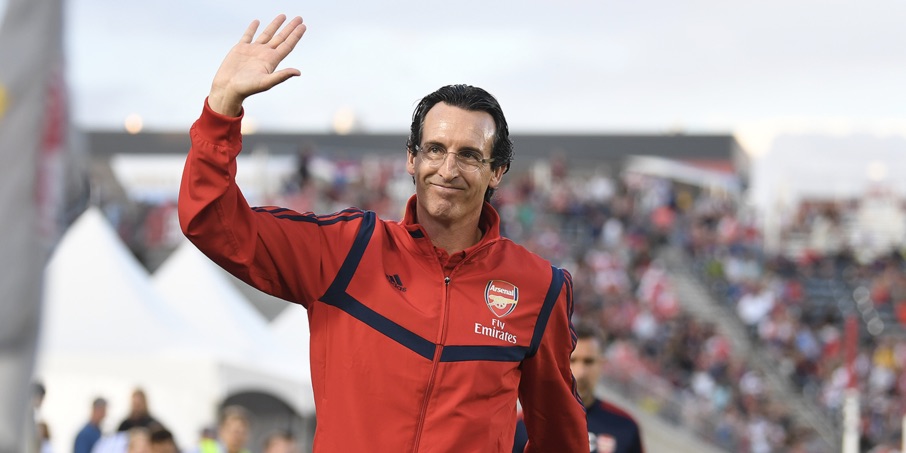 With a restricted transfer budget, Arsenal may need to lean on their Academy graduates for the upcoming season. Unai Emery hinted that this was a good platform for them to stake their claim for a place in the first team.

Speaking at Dick’s Sporting Goods Park, he said: “We are working very well here in Los Angeles and the first match was good to use different young players, to give them chances to show their quality, commitment to work and to be with the idea to help the team.”

When asked about new signing, Martinelli, Emery preferred to focus on the broader impact of the team.

This pre-season is also Emery’s first where he’s joined by new Sporting Director, Edu – someone who played under him for a year at Valencia.

“He (Edu) has experience. He knows Arsenal. He’s a very good worker for us in this sporting director job. Raul, Vinai and I were trying to find the best person who can help us with experience and also with knowing this club. It’s Edu. For me he’s the perfect man to do that,” said Emery.

We can only hope that it’s all positives from here as Arsenal need all the help they can get this pre-season.

Please, let’s this not be just words, we desperately need some youngsters to break through and shake up the status quo.

I really hope so, too. I really doubt Emery’s sincerity on this one, but hope that his hand is forced a bit by Freddie and a shortage of incoming established players to give youth a real chance this season. I wish we were gearing up for a title run this year, with a united front and imposing style of play, but we are clearly a long way off from that formerly held ambition and thus we’ll have to accept, and hopefully start to enjoy, the long and winding road back to the top.

With new signings struggling on in the transfer window, I don’t think Emery really has a choice but to rely on the youngsters. I’m actually a bit more excited to see what they can do. They may be our highlight of our season and keep us fans going during this transition at the club.

Read on Twitter that there was an argument between Mislintat & others earlier about the loan of Suarez. Mislintat was reportedly strongly against it and argumented we rather give more minutes to likes of Saka.

Zero idea about source & credibility though, so take this with the a pile of salt.

I for one am excited by the prospects coming through. The league is gone for everyone really (I don’t think Liverpool will even come close this season after the luckiest season on record with 12 offside goals!). We may as well just try and enjoy it, back these kids and hopefully build for the future.

For the lague, I couldn’t agree more. The thing is that we are desperate for CL football and with this team it is next to impossible.

Apologies. 11 offside goals. Yes there is a Liverpool fan “debunking” it but that is nonsense.

Much rather lose with the kids than watch Ozil, Mhiki and Xhaka be constantly out worked against the big teams.

A billion times this. If we’re gonna lose, at least blood our youth. I really don’t give a shit about the twilight careers of players who never really made the grade.

so 2020-21 will be another season out of champions league?

Annoying that journos were asking about Martinelli, so damn desperate for transfers, even though Saka and Eddie were more impressive in the game.

Think you need to look at the bigger picture on this one though. Martinelli is an 18 year old kid making his debut with players he’s basically just met, who almost assuredly does not speak the same language as him and for a coach he’s barely worked with. Saka & Eddie are playing with the same players they’ve played with for years as much of this team really was the U-23 side.

I think you’re missing my point.
Journos are interested not just because of all that, but because he’s our sole transfer. Emery was right to spread the focus on all the youth, and not just enquire about the 1 and only transfer.

Spreading it amongst all also reduces expectations on the young Brazilian, because history has shown a couple more goals and the media will hype him to high heavens as our saviour, something he doesn’t need.

That was my point.

” Raul, Vinai and I were trying to find the best person who can help us…” So… Emery was involved in appointing the Technical Director? That Raul and Vinai is involved in that doesn’t surprise me, but should the Head Coach really be involved in appointing what is, essentially, his boss (if I have understood the TD role correctly. Feel free to correct me if I am wrong)? Other than that, the best of luck to Edu. Hopefully he will do a great job for us. 🙂 I hope the kids will get plenty of chances this season to stake… Read more »

It makes sense for a coach to at least be on-board with the hire because the head coach/director of football partnership can easily become toxic if personalities clash.

Part of the reason things didn’t work for Monchi at Roma was him and Eusebio di Francesco didn’t see eye to eye. There’s also Tuchel and Mislintat’s long, bitter dispute at Dortmund, and Luis Campos, Monaco’s former DoF who’s now doing good work at Lille, had a major falling out with Marcelo Bielsa when he was Lille’s head coach.

A Different George
Reply to  C-J

Would you really want a club to appoint a technical director that the coach disliked or had little respect for?

This was a pleasant read. It’s about time we went back to our roots a bit and promoted the youth at our amazing academy.

Somewhere in our academy, there are players who want to displace the likes of Mustafi, Ozil, Mhkitaryan etc and showcase their skills. This will only put much needed competitive pressure on our senior squad to actually deliver the goods that we pay them for.

Mixed feelings about this. Happy our young players will get a chance (as long as this isn’t just talk).

But I can’t help but wonder what happened to being able to compete with Bayern Munich and co. We look as far away from that than at any point in the Kronke era. Genuinely worrying that Leicester and Everton look like they have more ambition than us. Could be a very long season, even if some of the youngsters come good.

Except at centre back… Kos: “my leg is falling off” Physio: “I picked it up and glued it back on” Kos: “can I play once a week until it is fully healed and won’t need injections and glue and sticks anymore??” Raul: “I sent you a text message, u gotta play three times a week full 90minutes until end of the season” Kos: “wzf” A couple of months later… Emery:”Kos we really need you as the senior CB next season, sign up forever, we promise to look after you like we always have” Kos:”like the end of the season just… Read more »

Sorry, I’m with Chiza, that was painful.

Excellent, let’s test these youngster’s mettle. We may be surprised by some and may also be disappointed, but one thing is inarguable, they will bring a hunger and desire to the squad which can only be a good thing

…says the man apparently not giving Bielik a chance.

He and guendo still on holiday tough

I hope he means that Bielik in our first team and Nelson in the starting eleven into the new season. But what if we do not sign Ramsey’s replacement, does he means either Willock or Smith-Rowe to fill play in the position?

Yeah.
I wanna see way more of ESR.
To me he has potential to be one of the best in the world, better than Ramsey.

Ramsey is a very good player but, let’s be honest, being better than Ramsey isn’t that much of a career milestone, is it?

We’ve been here before. Pre-season and some players impress from youth ranks, some people feel we have enough for next season, promote the youth buy a young cback for 27m on promise. To be sure some of the young players look good and will develop but this is going to take time. Saka looks excellent to me. Nelson hopefully gets involved first team. BUT we won’t get anywhere if we don’t invest first and foremost in a strong Cback in his prime and a winger also in his prime (and there are so many out there- Ziyech rumoured to be… Read more »

The Ziyech one is strange. He had an excellent season, is a relative bargain, and is still young. Emery must really dislike him for some reason to at least not show some interest. There are no clubs interested from what I’ve heard. A strange one indeed

First time I agree with you.