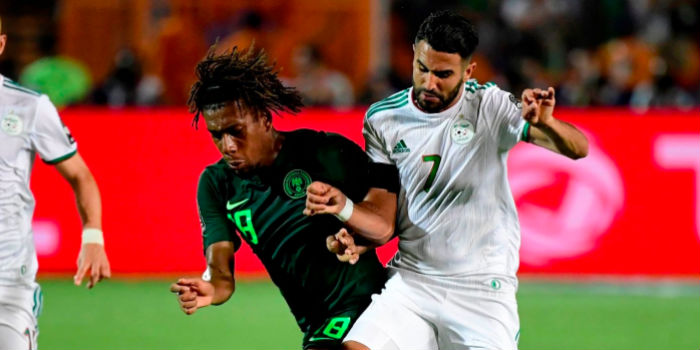 Riyad Mahrez’s stunning stoppage-time free-kick sealed a famous win for Algeria as they beat Nigeria 2-1 to seal a place in next week’s final of the African Cup of Nations.

A tense encounter in Cairo looked to be heading to extra time before the Manchester City winger whipped a beautiful effort around the wall to break the hearts of the Super Eagles with the last kick of the game.

The fiery #ALGNGA that ended in the dying embers of the game with a @Mahrez22 free-kick…?

Earlier, Idion Ighalo’s penalty, awarded for a handball by Aissa Mandi following a VAR review, had cancelled out William Troost-Ekong’s own goal five minutes before the break.

The result means Alex Iwobi, who had a pretty decent tournament, will finally go on holiday once the third-place play-off has taken place.  Given he’ll get at least three weeks off, it means he’ll definitely miss our opening game against Newcastle on 12th August.

His holiday starts after the 3rd/4th match on Wednesday.

Anyone find the 3rd/4th place match odd? Something like Olympics with medals for top 3, it makes sense. In an international football tournament it’s seems odd. It’s like having a 3rd/4th place game for the club cup competitions like Champions league.

Don’t be giving UEFA any ideas.

I have to say, it was really nice to see Iwobi playing football and obviously enjoying himself for once. I hope fans can stop getting on his back this season and support him the way Nigerian fans have this tournament

From the little I’ve seen of Iwobi, he seems to be absolutely flying in this new-found central role for Nigeria. Take note Unai.

Really enjoyed watching him in deeper central midfield. He really is a Central Midfielder being forced to play on the wings and being judged on that.

Really would like to see him in a 3-man midfield. Another reason why we really need a winger.

How deep though? Looks more like he’s been at number 10 or ‘whisper it’ the Ramsey role arriving late into the box.

If he was being considered / groomed for the Ramsey role, would Emery not have played him there when Aaron got injured?

He doesn’t need to be the new Ramsey, arriving late into the box he can do but it’s not his thing.

Ramsey’s strength was movement off the ball to ghost into positions, Iwobi’s is on the ball to carry it and dribble.
He’s much more like Jack or Santi, or even Diaby in that regards.

They should try him in the middle because he’s not up to standard on the wing.

I agree, similar to how Klopp sets up his midfield. He has a little more stability now with Fabinho, but for long stretches he just uses 3 passing midfielders who are good at ball retention. Between Keita/Henderson/Ox/Milner/Wijnaldum, even going back to Emre Can, all of them are playmaker types, but with 3 working in tandem they boss the midfield quite often.

Agreed. He’s the worst shot on goal since Alex Hleb.
The further away from goal he is the better.

Nothing to do with Iwobi.

Leno me, I’ll be your friend
Reply to  Chiza

My sauces cover my chips.

My sources tell me your sources don’t exist.

Leno me, I’ll be your friend
Reply to  Mick Malthouse

Damnit, now my ketchup is having an existential crisis!

Who’s your source? Hope your right though

Mahrez, pure quality and highest level of winning mentality. A goal like the last three points from downtown in basketball. Can I say none of our players can score that free kick 5 seconds to go ?

We should have bought him when we had the chance instead of Mhkitaryan.

I’m struggling to digest reports that we are not interested in Ziyech.

He has similar attributes in trickery and technical skill that we have lacked which only Iwobi (maybe Nelson) and Laca provide at the moment.

He still needs to play against Tunisia for the third place match on Thursday.

Yeah he’s been one of the stand out performers of the competition. Almost scored a cracker last night too.

Not to take anything from Iwobi who has bad a very good tournament as well but if you keep Iwobi, you should at least give Benacer a chance. We don’t even have money to buy players and let go players who were already known for great talent.

Hoping he gets a chance in a central position this season, very impressive there and it fits his style more.

Best news of the summer #IwobiLANS

While I appreciate your positivity, I hope you guys here will prove to be much more competent than pure statistics…
https://www.whoscored.com/Teams/977/Show/Nigeria-Nigeria

The importance of watching players and not just stats (basic stats at that).

Iwobi, Musa & Ndidi in particular have been Nigeria’s best player.
The fact that list has Mikel above Iwobi, even though he’s barely played (because ironically, Iwobi has taken his spot) says it all.

In other news not related to us, Harry maguire going to united for 80 million and Leicester replacing him with Lewis dunk for 45 million, what is the world coming to with these 2 average centre backs going for 125 million together. Lol. We might make a profit on mustafi yet. Ha

Mustafi’s agent just needs to find him a British passport and remind everyone that he came through the Everton youth system. Then Aston Villa will probably bid 50M for him.

A lot of pundits repeat the proverbial sweet nothing that we lack cojones or fight. Frankly what we are lacking is technical ability. Aside from Iwobi (maybe Nelson now) and Laca, we have no players who can take on opponents one on one. This is especially poignant considering we shed points aplenty away from home where teams tend to sit deep and constrict passing lanes making us go side to side. Which is why a winger is critical to add (even with Nelson in first team) We simply need the trickery and guile (not to mention a bit of pace)… Read more »

If he was a Spurs player he’d be back playing by the start of the season.
Just saying.