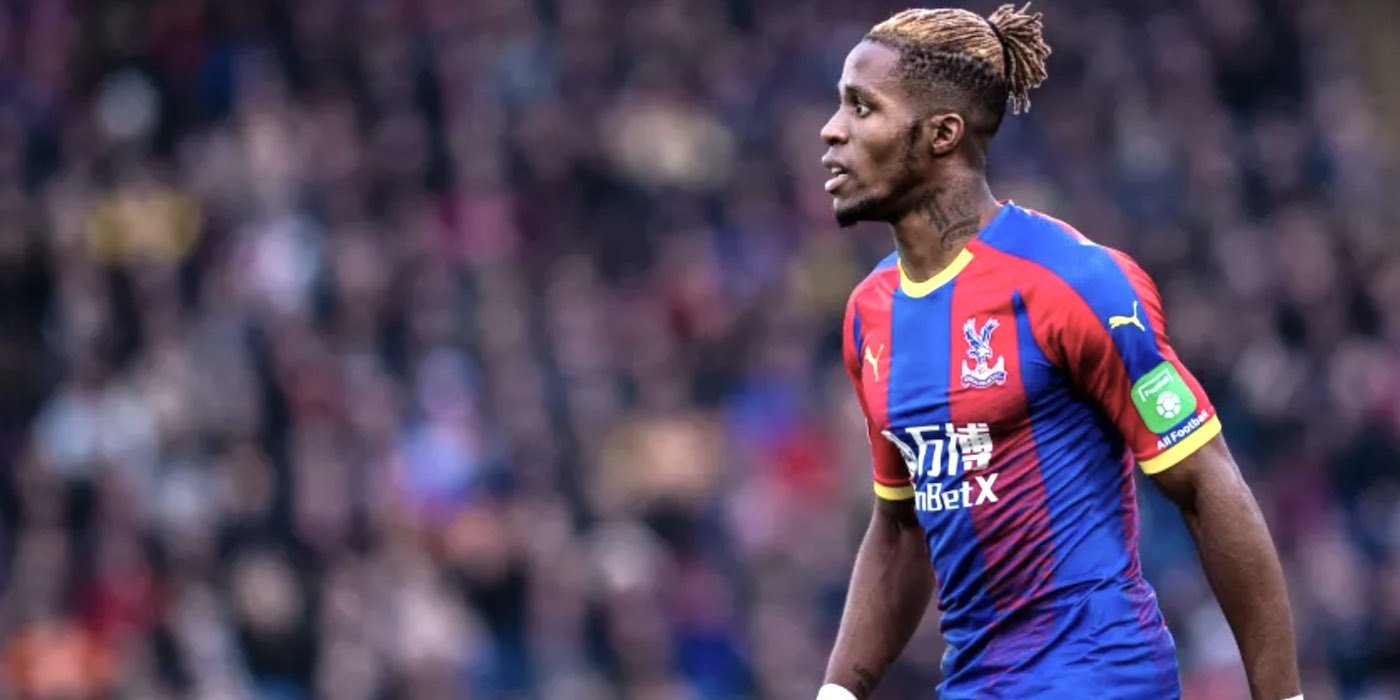 Crystal Palace manager Roy Hodgson says there’s ‘not much to discuss’ regarding Wilfried Zaha’s future because Arsenal’s bid for the attacker is so low.

The Gunners are believed to have opened negotiations for the Ivory Coast international with a £40 million offer, around half the amount the Eagles would expect from selling a player of such high calibre.

Asked about the situation after Palace’s 6-2 friendly defeat to Barnet, Hodgson made clear that Palace, who’ve already sold Aaron Wan Bissaka to Manchester United for big bucks this summer, are not interested in more nonsense bids from the Emirates.

“I don’t think Arsenal have actually made a bid that has come anywhere near our valuation,” he told Sky Sports.

“I’m sure the player realises that if someone’s going to take him away from us, he’ll expect clubs to pay the market value.

“Until someone does that, there’s not much to discuss regarding Wilf.”

It’s not clear at this point if we were being deliberately cheeky in the hope the player would force his way out of Selhurst Park or if we were genuinely optimistic that we could persuade Palace to part with their star man for that amount. Have we got Derren Brown on retainer or something?

Realistically, any deal seems dead in the water unless Raul Sanllehi comes across a magic money tree.

Signing Everton instead will do.. probably a better player to boot. Optimistic still dreaming of signings but Kroenke said to be excited soooooo…

We should count ourselves lucky that Palace and Hodgson (didn’t realize he was still alive, let alone coaching) value Zaha has highly as they do, as it turns our attention to better players (like the one mentioned above) for half the price or to academy products for free — both better options.

Press reports suggest we’re certainly interested in (Everton) Soares and a club doctor has gone out, presumably, to examine him prior to a possible move. A problem, as with other targets, appears to be the balance between an initial down payment and the add ons that we’re offering. As with the others, the potential selling club, Gremio, wants more of the total fee up front. Not insurmountable, but it depends whether they get any better balanced offer from someone else.

My worry is players take time to settle, everyone thought Tevez +Mascherano were rubbish originally, same with Fabinho, Keita, Kovacic last season, I thought Lacazette looked extremely lightweight in his first season, he was far too easily knocked off the ball, but last season he was a completely different player. Zaha is good to go, but I suppose that’s why he’ll cost at least twice the price of Soares. At last with Malcom who’s younger, he’s played in France and Spain. I’m not against signing Everton Soares, but I bet he takes at least a season to get used to… Read more »

Would love if we signed Everton, a genuinely exciting player with lots more to come from him. Since we are in a phase where we might lose players, it makes sense to pick up players like him, who will almost certainly hold and grow their value, while contributing to the team. Hodgson suggests “market value” for Zaha is 80mil: that’s “selling club value” not market value as evidenced by the market not being willing to pay it. And certainly, he will not hold his value, so would be a bad investment just like a lot of recent deals. It’s a… Read more »

I like the idea that Sanllehi was drunk at 2am with Emery in a tapas bar and did it just for the bantz.

Well it worked for George Graham

But back then, most top executives were drunk by 2 AM.

Let’s move on from zaha as it’s not and was never going to happen. Massively overpriced for what he is. Arsenal should move on from Tierney too. 25m for the back up to Robertson in the scotland team? Madness!

To be fair, if Jordi Alba was scottish he would also be Robertson’s back up most likely. Don’t see how being Robbo’s deputy makes defines your quality, the man’s a beast.

Of course he’s overpriced. Palace are looking for what he’s worth to them AND ManU’s 25% on top of that.
See, if we pay 80, Palace only get 60. That’s a pretty reasonable price for a PL star in his prime and on a long contract.
It’s the huge sell-on clause that fucks us.
It’s all on Zaha though. He never should have signed a 5-year contract unless he wanted to stay there for most of those five years.

Palace are being unrealistic with their demands. No one will pay £80m for Zaha, because he simply isn’t worth that money.

Also, they made their own bed with the sell-on clause, so that shouldn’t be a consideration for the buying club, and shouldn’t affect the market price as the player’s valuation is being judged against the rest of the market – the majority of which don’t have such large clauses.

He’s barely worth £40M, that is an outlandish amount of money… £80m? Tell Roy to pass the blunt!

Transfermarkt has him in at $40.5m. Seems about right. Sometimes you need to know when to walk…

Mustafi bought for £35M, three years ago. If I were Palace people, I would use that as proof Zaha is worth somewhere around £80M.

That means mbappe must be worth £35B becuase he is literally 1000x better than Mustafi…
The money thrown around these days in insanity. Hard to really grip modern football with much enthusiam at the moment. Lucky the powers that be have a “Super League” in the works to make it all better…?

Same pattern every year. However we will get a worsening reputation each year and will lose credibility.

That boat sailed some time ago

Zaha is not worth 80M. In fact i would doubt he would justify 40M in the end. Keep in mind Ozil 40M, Laca 43.5M, & Auba 53M. But thankfully, Palace doesn’t need to sell if they don’t want to. The fact is there is a market for the cash loaded clubs and another for the rest of us.

Ozil fee is a bit outdated, but if you look for how much world class (or just below) players have moved this summer e.g. Jovic for £54m, de Jong 68m, Hazard 90m, Griezmann 110m – he is absolutely no where near that standard and I think we’ve bid about what he’s worth

But remember, Josh said we should be “excited” …

Yeah, we better be excited, because the club sure ain’t gonna make us.

Why is no other club seemingly interested in a £80m winger? ?

Exactly. He is so overrated and overpriced

Im not sure why some of you resent signing Zaha. A player that actually has worthwhile trickery getting past the opposition. Its been over a decade that we’ve had a player who could do this and right now Iwobi is probably our closest option. Although he plays for Ivory Coast, he is still a homegrown player, hence the price. Being a failure at United has reinvigorated his desire to play without fear and could be beneficial for us. Ozil cost us £18mill per year in wages and I’d rather have a player who desperately wants to play for us in… Read more »

No one resents signing him.

He might be worth that much to Palace in fairness, but not to us. Better players than Zaha like Fekir and Ziyech might move this summer for less than 50m.

So once you get into the 50-80m range it’s completely logical that we walk away and look for an even better calibre of player.

Palace don’t want to lose 2 assets in the same window, they feel they can’t replace easily. Same can be said for Leicester’s 80M valuation of Harry Maguire. The point is to shoo away interest…

Oh but we are signing him…#BeExcited ?

If we spunk 80mil on him I’d be disappointed, certainly not excited.

Once upon a time Arsenal were one of the big 2/3/4. Not anymore.
It will cause a slump or mass boycott of fans before the US owner
will release funds to compete for top talent.
O f course Emery may confound us by trusting young talent. That is ,imho,a
long shot. Since the last 10 yrs ,Chelsea and MC have won the epl 5 times each.
As for qualifying for the cl,the gunners are there to fill the coffers for the American.

Put the money where their mouths are.

Should have shown the ambition Lille OSC did by appointing Campo.

Instead he likes to write sweet nothings. Alas.

https://www.bbc.com/sport/football/48989305 Giroud weighs in on Koscielny. Note Le Boss does not agree with direction club is taking. He prob demanded a high wage to get out. He knows he is suffering injury issues but the club is trying to be cheap with no discernable coherent strategy. Like the Tierney chase with impact to positions of greater priority we need to address. Like this whole Zaha saga. why the hard on when there are equally good options in market like Ziyech whom Overmars mentioned Ajax were willing to part for 22m with Arsenal but inexplicably we turned it down. Hope there… Read more »

I’m shocked Palace didn’t jump into action when we threw in a choice of Jenks, Mustafi, and Elneny

Does anyone really think Zaha is all that? I.m always underwhelmed watching him. Got to be better ways to spend 50M+

Zaha would improve our team immensely. Another embarrassing bid to match the Luis Suarez bid some years ago. They talk about Edu coming in to complete the ‘jigsaw’ but, and as welcome as Edu is, the other parts of the jigsaw are all wrong.

Looks like this potential transfer is a dead duck then. We simply don’t have the money for Zaha, or anyone else in the price bracket being discussed by Hodgson.

Yeah, they want him to stay, as they are dead in the water without him.
Worry not, though – the price is sure to go down next year after their relegation.

80 million is way too much for a player who has scored 10 goals in a season only once in his career. Ronaldo and Bale cost around that much and Zaha isn’t half the player they were. Even in this inflated market that price makes no sense. Also I’m not convinced he’d be that good for us as he seems to hold onto the ball way too long and is more interested in doing a trick than doing something more productive. I see him as a Darren Bent type of player great for a small team but can’t perform to… Read more »

We shouldn’t be bidding (much) more than £40m for Zaha, I don’t blame the club for much here except maybe they could have kept it under wraps

the thing is, they don’t Value him at 80 mil, they value him at 60, they made a shit deal with united and its coming back to bite them

Interesting to hear Hodgson speak about market value. Numbers are made at random, £40 millions for Zaha seems fair to me but my neighbour might think Deeney is worth £100 mil. There is a bit of a rule of thumb there and nothing based on scientific evidence.

Yeah, well, with all due respect, Hodgson, Zaha’s not worth anywhere near as much as you think he is.

Glad we’re smart enough to not get smacked about with an £80million price tag! I’m a big fan of Zaha but it’s good to see the club won’t be taken advantage of like United

Leave him alone and play the youth.