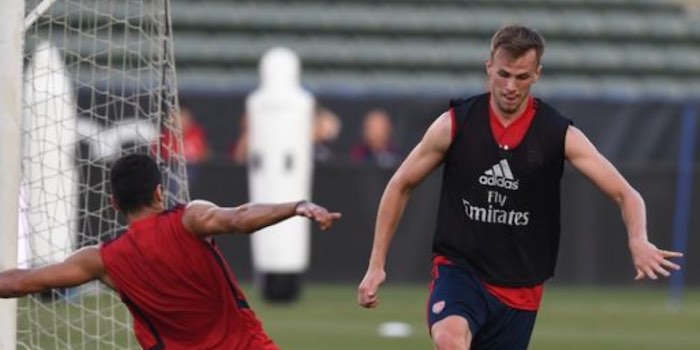 Rob Holding could make his Arsenal comeback during pre-season despite suffering a cruciate knee ligament injury in December.

Normally the prognosis is for 9 months out, but the 23 year old looked sharp in training last night as the Gunners prepared to face Bayern Munich in Los Angeles.

The defender took a full part in the session, sprinting, making tackles, and getting stuck in all over the pitch.

It has raised the prospects of him being eased back into action a bit earlier than anticipated, although the club will monitor his progress very carefully to ensure there are no setbacks.

Arsenal did have an injury scare in last night’s session, with Pierre-Emerick Aubameyang left in a crumpled heap on the turf after a challenge, but following some treatment and an ice-pack he was ok to resume training.

For a full report on tonight’s encounter, keep your eyes peeled to Arseblog News – we’ll be reporting from the game itself.

Arteta: ‘Incredible’ Holding is growing in every aspect

God is a gooner

So excited for Rob’s return. He looks an absolute beast! Maybe some gym work and a refresh at this point in his career is no bad thing.

Arsenala Vista Baby
Reply to  God is a gooner

Hopefully can keep Mustafi out of the line up

I think it’s possible that limited first team time could protect mustafi and make him less of a liability!

Think of how other players (usually younger) have had 1st team time limited to allow for healing the confidence & mental state, and it does seem like mustafi’s most obvious flaws are mental.

So hopefully BIG ROB HOLDING can suck up all the first team time with sokratis!

Protect Mustafi and make him less of a liability.We need to offload him asap, not hide him away like the relative nobody talks about! He was, and remains, one of the most expensive defenders (at £35 million and £150,000 a week – thanks, Arsene) and he’s a gold-plated flop. If you visit Spain, you can hear them laughing in Valencia even today about that transfer. Hopefully, if we can’t offload him the likes of Holding can keep him out of the team altogether until his contract runs out.

Dave M
Reply to  God is a gooner

It’s great right, we’ve all been Holding out for his return since we were Robbed of him last season.

“Kolo Toure” – verb, meaning to senselessly take a teammate out during a non-competitive game or training seasion.

“Aubameyang was unfortunately Kolo Toured during the tour of America, just days before facing Bayern Munich.”

Rob holding and papa could be a much better pairing this season. From next season onwards Rob and saliba would be just fine. Still we are 1-2 defenders short

One of the first positives from our off season.. Start of a good week for the gunners perhaps?

FFS don’t break him. The way things are going he is probably the key player our success depends on this season.

This is exciting. Saw the video Arsenal uploaded on YouTube: very few excerpts of him, but Holding really looks buffed up and does not seem to have lost the spring in his step though caution and time will truly tell.
Wish him the best of luck in his continued recovery.

Important to get your future captain* back on the pitch as soon as possible!

*So says Jack Wilshere, for whatever that’s worth.

He’s back – does this mean Emery’s not Holding out for a new CB anymore.
Sorry.

Well, I guess we are no longer in a Holding pattern with him.

I’d get my coat, but I don’t have one; should Rob one off of somebody, methinks.