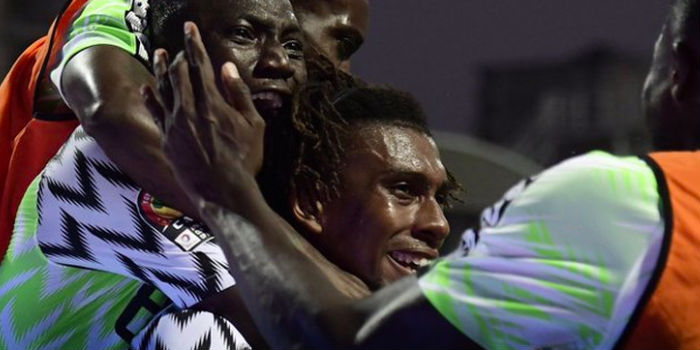 Alex Iwobi scored a second half winner as Nigeria came from behind to knock out holders Cameroon in last-16 thriller in Alexandria, Egypt.

Odion Ighalo put the Super Eagles ahead on 19 minutes before two goals in three minutes from Stephane Bahoken and Clinton Njie saw the Indomitable Lions snatch the advantage before the break.

Former Watford striker Ighalo equalised on 63 minutes and then turned provider for Iwobi who calmly slotted the ball past Ajax keeper Andre Onana. Kanu, watching in the stands, celebrated wildly.

Nigeria’s 3-2 win sets up a last-8 clash with South Africa who stunned hosts Egypt with a late goal. Mohamed Elneny went off two minutes before Thembinkosi Lorch struck the decisive on the counter-attack after 85 minutes. Watch the video below for the definition of deafening silence.

Go ahead, rate it! #TotalAFCON2019 pic.twitter.com/k2VQ5sBqyX

A disappointing evening for Mo who’ll now head off on holiday for a while. It remains to be seen whether Unai Emery sees him as a member of our midfield for next season.

Bafana Bafana with a madness vs egypt

Gave them no chance against this Egyptian team in Egypt, but what a performance, very well deserved!

Iwobi is starting to become the player I hoped he would. He also provided the one brief moment of joy in our Europa League shitstorm.

The Title is Prophetic. Btw I believe that under Unai, Lucas Vasquez is an Arsenal legend in the making. Maybe most important to some is that with his strengths, pace, power and acceleration , I ‘imagine’ he can fill in at RB. He is a very good winger and none of us can imagine how it might stunt your growth playing on the opposite side of the highest scoring Winger in world history, basically being a provider for him and shunning your own goal scoring development (more evident in his 2015,2016 yes YOUTUBE clips) . He’s a strong lad with… Read more »

Jack but
Reply to  CHIBS

Excuse me, this post is about Alex not thus vaquez, dude scored an important goal for Nigeria to edge the defending champions, give him credit

HelderHughes
Reply to  Jack but

Ssshhh… I want to hear more from Chibs. Do you really think Vasquez can play RB?

Stinging Sarcasm noted Sir Helder , but Yes, in my opinion he would do a job there if we decided our best RW should deputize as RB. He would be our only true RW there over Bellerin (pre-conversion) rn anyways.

CHIBS
Reply to  Jack but

I’m Nigerian. I enjoyed these yesterday, now simply giving my opinion in the only Arsenal thread I follow .

Thierry Bergkamp
Reply to  Jack but

Give him a break…he’s been patiently waiting for a new article, to type that

I watched both matches. Both Iwobis and the SA youngster were aplomb, two birds with one stone. Good on you

Iwobi’s or Lorch’s or both?

Premier League goalie is saving that…

That explains the Lucas Moura hat-trick…

Feels almost like you’re discrediting African goalies, because he’s the best Goalkeeper the best youngster team in the Champions league which is the best league in the World. Give him his respect my man

Or maybe the one goalkeeper. Just saying…

Have a down vote for your blasphemous name

Can we buy this Tierney lad anytime soon?

Don’t need to worry about Lback this summer.

They didn’t appreciate our second offer of whatever we offered the first time plus two bags of Jamon Ruffles. We thought for sure that would get it over the line…

Iwobi played centrally too.
I wanna see him as a no.8 in a midfield 3. Come on Unai, make it happen.

I feel he’s (unai) going to make that happen.

Iwobi does fade a bit in games, could be a stamina issue? but he’s a player on the rise, and there was clear improvement in his game last season.

I watched the match. Iwobi was up for it. It will be great to see him grow in confidence and take on a more senior role for Arsenal after this. There is more in him as a player. He is clearly a great guy.

I hope we can get rid of Elneny. Diligent player but just not good enough. That he is barely used says it all. Ditto Jenkinson. Just wasting space. Complains about Mustafi but Unai preferred him to Jenkinson at Rback tells you everything. As much as we may want to upgrade on ozil and/or Mustafi, these players actually provide a lot of function beyond their poorer points. Elneny and Jenkinson nobody even wants in market. Iwobi this season has been excellent. More end product seems to be coming. But we need to balance him out with another good winger even if… Read more »