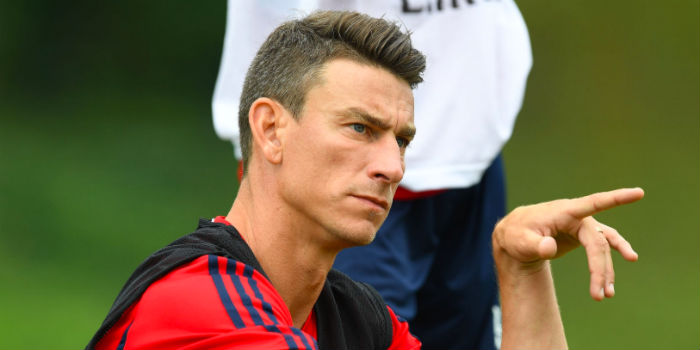 Rennes president Olivier Létang says the Ligue 1 club do not have an agreement with Laurent Koscielny and that their interest in the defender cooled in mid-June when Arsenal told them he wasn’t for sale.

Angry that we wouldn’t let him leave for anything less than £10 million, our club captain refused to go on our pre-season tour of the USA in the hope of forcing a move. Since then he’s been forced to train with the kids at London Colney.

Via his agent, we know that Koscielny was talking to potential suitors towards the end of the 2017/18 season with a view to leaving at the same time as Arsene Wenger. His horrible Achilles injury killed that idea and after a long recovery, he returned to first team action at the Emirates in December.

Judging by Létang’s words, Rennes were one of the clubs trying to lure Koscielny back to France this time last year and they registered interest again in June, however, they maintain they have since backed away.

“We learned about [the so-called agreement] like you,” Létang told Foot Mercato [translated by Football365]. “Even my son told me it seems Koscielny is on his way.

“I told him that was false. He’s a good player with a lot of experience at international level.

“We met him twice last year. When we heard there was a chance he could leave in early June, we called Arsenal to ask if that was true because we could be interested.

“Around mid-June, they got back to us and told us they wanted to renew him. He wasn’t for sale.

“We haven’t had any more talks with the player. We have great respect for other clubs. We can’t talk with a player if the team don’t want him to leave, so I can say what came out this weekend is false and isn’t current.

“No, we haven’t spoken to Arsenal since mid-June. For me, there’s no point talking with the player if the door isn’t open.”

While direct contact between the club and player may not have taken place. It’s fair to say they’ve probably spoken to his agent and that Koscielny is well-aware of their financial terms. That’s just the way football is and always has been.

Bordeaux, another club supposedly sniffing around, have also said that they have not spoken to the player. By the sound of things, they’d quite like to. Quizzed about Koscielny, coach Paulo Sousa said yesterday, “I have already said it, he is not our player.

“He is a player that every team would like to have because of his experience, the quality of his play and everything that he represents in football.

“We are in the market for central defenders because Jules Kounde has left and so we are looking for another player to replace him.

“All talks are ongoing but once again he is not our player.

“We are working hard to give ourselves the chance to have a player with his characteristics.”

Praying that Holding is back to his best and available at the start of the season..because as things stand we will somehow be worse defensively than last season..

I would seriously prefer to try Zech Medley in front of Mustafi 🙂 We must do something about that situation mustn´t we ?

We should have sold Mustafi even at low price instead of keeping him.

The way he made errors in recent friendly matches showed nothing different from last year. We can’t afford his mistakes anymore.

Seriously, Sanllehi and Emery has made this summer as one of the worst transfer window ever even if they can manage to land Ceballos (loan) and one winger (Zaha/Everton). They don’t really have targets and don’t want to sell leftovers at any cost. Now we stuck with Ozil 350k per week, Micky 250k per week.

I’d like to play you, or me ahead of mustafi.

I’ve got to the stage of being angry when he smiles m, I know that’s ridiculous but I can’t help it.

Chambers was impressive as a CB when he came to the club. Injury with Wenger’s usual idea of seeing young players in various positions and lending them to other clubs did not help him at all.

Just want the koscienly situation to be over with. He’s an ungrateful prick that threw his legacy down the drain to play for mediocre teams in a mediocre league. For those that think we owe koscienly anything, think of how error prone he was during his first 3-4 seasons. He would either score and own goal, concede a penalty or get a red card every other game. I’d rather keep him in the reserves all year than let him leave on a free. If he went about it better and was professional – like he has been throughout his arsenal… Read more »

Those error-prone couple of years you speak of don’t count as he’s been quite massive for the greater part of his contract.
I don’t quite know what might be the cause of his current contract mess but whatever would justify him to be a prick would be the little we know about this contract mess and definitely not his errors a few years back.

Mustafi is terrible. His wages are excellent (reportedly £150,000 a week). The chances of selling him are negligible (for reason, see “terrible” and “wages”). Holding is about the only ray of sunshine on the horizon as far as I can see.

Doesn’t the thought of the defence actually being worse that the omni-shambles it was last season, particularly towards the end, make you shiver? It should.

I just want to say thank you Arseblog for keeping us updated with developments from all parts of the club.

You have actually made me more interested in following and support the Arsenal ladies.

As for this Koscielny news, I am still wondering how everything just turned yoyo all of a sudden! He was the last person on the team I would expect such a behavior from.

This is becoming embarrassing for Kos.

1 more year with Arsenal and he would have had a testimonial game in the future. Just a sad ending to one of my favourite players from the last 10 years…

Anyone think Kos will be playing for us this year or has he burned all his bridges?

Bridges burned. Get him off the wage bill, no point in keeping him in the reserves to prove a point. I don’y want to see him in an Arsenal shirt again.

God and the King have both spoken!!

The club paid for him to be nursed through his injury (as well as paying his salary) – I think that there should be some payback for that. He either goes for a decent fee or stays and plays.
I haven’t forgotten Sol, who told Arsene that he had to leave and play abroad on a free for his own sanity. Arsene did the “decent thing” and let him go and he ended up on a fat salary at Portsmouth.

Not as fat as his arse though

Don’t conflate. Sol has nothing to do with Kos. We can dislike or detest the method of each in their own way but this isn’t comparable. Kos or any player who gets injured in service to the club (Welbeck,Santi, Diaby) should be taken care of. That is the understanding between player and a club. The player prepares his body and puts his body on the line, he gets rewarded with money. Should he get injured, the club pays him and repairs him with the best practices available. To say because Arsenal did the least they could for him, he now… Read more »

Have you been to Portsmouth though? It’s like being abroad.

So sad that this is ending this way. The guy should be getting his testimonial (when he has had 10
seasons with us) but here we are. I love the way he carries himself in today’s celebrity player culture. Humble, quiet, no social media antics and did his job. A good man and a good player. He will be missed.

Leave him training with the kids until the required fee is met. If it isn’t he can train with them until he wants to act like our captain again and then leave when his contract ends. No player is bigger than the club

What kind of fee can we realistically expect, 2/3 million? Let him go for fuck sake. Everyone looks bad in this situation not just Koscielny

Bored of this already. Kos has been a very good player , but it’s time to say goodbye and quickly.

He is doing us a massive favour. What the club is doing is they are again trying to skimp on what they really need to do. Likely they are reluctant to spend on a proper solution at Cback. They know they have to pay market rate 30-35m for a winger. They know they have 40m plus (IF) we can sell some players maybe an additional 20m. That leaves about 25-30m for the Cback. Instead they prefer to throw shiny objects at an all too gullible fan base, buy a short term seemingly cheap option in an (UNPROVEN) Saliba with installments… Read more »

This issue needs to sort itself out before it goes on much longer.
Not a good luck for Kos which is a shame considering all he has done for us

Its a shame fans are treating Koscielny in such a mypoic way.

He is doing us a service taking himself out of contention next season and forcing (attempting to) the club to reconsider their cheap way of fixing defense.

Should not be holding on to him. Take 5m. Its ludicrous what the club is doing. We need to be selling other players as well and trying to make 20-25m Jenkinson and Elneny however much, just get rid of. Ozil or Mhki should be about 10m either one (with Ozil unlikely bc of wages) Mustafi or Chambers at 15-20m (Chambers prob a bit more on account of local content) Maybe Bielik if he goes hopefully for good money otherwise we should hold. And Ospina I believe made us 3m (paltry but OK) Added up if we can garner 25m to… Read more »

https://www.90min.com/posts/6413451-nabil-fekir-why-premier-league-clubs-should-be-queueing-up-to-sign-him Nabil Fekir Injury issue aside, ONLY 24m to Betis and offered to us at 30m (note price difference for different clubs) Why we were not in for him is beyond me. He would pair well with Laca (convince Laca to stay), has proven himself at highest level over many seasons (If Auba is good enough and Laca, its a strawman argument to say Fekir is not) and is still ONLY 25yrs! Betis have a steal for 17m plus 9m add ons. Another player we should have strongly considered is Ziyech. Only 22m according to Overmars who was a bit… Read more »

Again we could well do with either of Upamecano OR Ibrahima Kayote.

BOTH have proven more than Saliba over the course of 49-55 games rather than mere 16 last season.

“We have a very good plan” – Raul…. What a joke to this statement with the current shambolic transfer business at this point of time.

I say get him. If a player of this quality can come in, happy to relinquish both Mustafi and Chambers (if poss), have Rugani-Sokratis-Holding + Bielik.

24yrs, 6’3 good with his feet, schooled at Juventus, surely a no brainer.

Get the wide player position sorted, buy Ziyech for 24m on Overmar’s advise, use another 30-36m for Rugani. Cebellos on loan. Done.

Why don’t we ship Kos off to St Etienne instead of loaning Saliba back to them once that deal goes through?