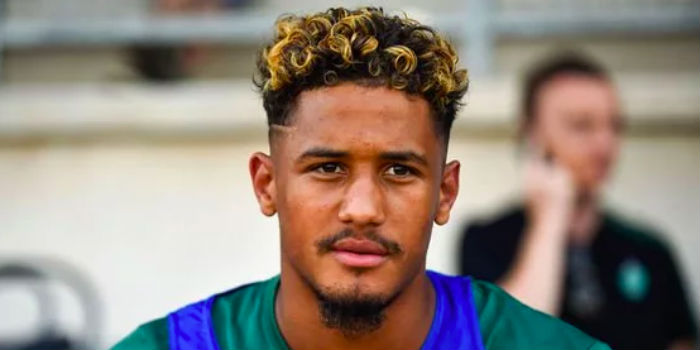 William Saliba is set to have his Arsenal medical next week when Saint-Étienne return from their short pre-season trip to the United States.

Les Verts beat Montpellier, without Saliba, on Friday in Washington DC to set up a clash with Marseille on Monday and will then fly to England for the build-up to a friendly with Middlesbrough at the Riverside on Sunday 28 July.

Funnily enough, Arsenal and Saint-Étienne will overlap in the US capital with the Gunners due to arrive on Monday to prepare for their match with Real Madrid at FedExField.

Towards the end of last week reports circulated that Saliba had opted to move to Arsenal on a 5-year deal instead of joining Sp*rs who had attempted to gazump us at the last minute.

As part of the €29 million deal, the 18-year-old will spend another year in his current surroundings, albeit on loan.

William Saliba's medical with Arsenal will occur on Tuesday, @mohamedbouhafsi reaffirms – everything is now finalised between the Gunners & St Étienne.

Speaking to Le Progrés, Saint-Étienne club chairman Bernard Caiazzo said of the impending move: “Everything is on track with Arsenal. William will spend next season with us.”

The former is pencilled in to fill Aaron Ramsey’s boots and would join on a season-long loan deal. The latter has already been the subject of two failed bids and we’re likely to try again even though the left-back is currently sidelined with an injury.

I wonder if the ‘5 years’ takes into account the year long loan back to Saint Etienne, effectively rendering it a 4 year deal.

Can you have a better start to your Arsenal career than turning down Spurs despite them offering more money?

Can you have a better start to your Grimsby Town FC career than turning down Spurs despite them offering more money? 😀

Feels like we 99% there for a couple of these transfers… but it’s giving me anxiety not having their faces plastered all over Arsenal.com

Probably, but agreeing the finer details appear to be taking the time with the others. Given all the positive transfer talk from the management recently, we needed to get some action and Saliba (albeit not for a season) looks like he’ll be the first new face joining us.

Their faces are plastered all over Arsenal.com

Hopefully they Tierney and Cebellos deals pull through, add Everton to that and it’s a successful window considering INS alone.
Hoping our CBs and CMs step up bigtime

If this deal does get over the line I believe it’s quite an intelligent move from saliba. If he is developing well why jeopardise that progression

I haven’t seen him play but from the pictures he at least looks the right size for a premier league central defender, it’s about time after years of undersized lightweights (koscielny).

Haha you couldn’t have picked a worse example to support your point than arguably our best defender over the last several years!

Or maybe that just shows how bad our defenders have been since the days of Sol, Kolo and Keown.

Exactly, Koscielny wouldn’t get near a premier league team with either of those players in it, same goes for Adams and Bould.

Put him alongside any of those players and he’s at least 7-8kgs lighter, and probably up to 15-20 lighter Sol and 3 or 4 inches shorter. He just isn’t the right size to be a top central defender in the premier league.

Nonsense. Koscielny had two or 3 seasons at the top of the game. Lukaku is quoted saying Kos is the best defender he’s ever faced. Aguero, (Kane), Suarez, he’s had many of Europe’s top strikers in his pocket over the last decade. Nothing but respect for him.

Not in the premier league he isn’t

He will at least react to being hit and pushed by thugs like Costa.

Kos has never been a leader like that.. he avoids confrontations which isn’t ideal if you have leadership aspirations..

You want size you should get Dunk or Duff…BHA. Metersecker had size but was purportedly ‘slow’ never mind his positioning made up for his speed. Koscielny and Per made a pairing bc Per was the stopper and Koscielny the more mobile of the two would sweep up. Currently we do lack a bit of height. Mavropanos (in time to come has that) and Holding can bring some height. Immediate issues are NOT fixed with Saliba. Koscielny has been a stalwart and a fighter for us. BUT to push him another season is the height of folly. Yet to replace him… Read more »

Saliba, Ceballos, Tierney, and maybe possibly Everton Soares is a good window. A definitive commanding CB, even if on loan for a season (wouldn’t mind Fabian Schar) plus the way our youth are playing, sets us up for an interesting season ahead.

i would settle for cahill if it meant another body infront of mustafi int he pecking order!

Fabian Schar is not the answer. I live in Newcastle and was at 50% of their home games last year. Florian Lejeune is the better of their CBs but slow and unfortunately, bajaxed.

I’m so desperate I’ve started to even consider Elaquim Mangala on a free.

Leno – Bellerin – Saliba – Holding – Tierney – Xhaka -Torreira – Guendouzi – Willock – Martinelli – Nelson – ESR – Nketiah – Iwobi – Lacazette – Saka – Chambers – AMN and Burton, + some astute new signing, all in one team, in two years time, is mouth watering.
That will be 24 or less in the average age column.
I can take all the grief in the interim.
ARSENAL WILL SURELY BE BACK WHERE THEY BELONG!!!

Serious question…so when saliba joins us next year will he have 4 years remaining with us? I think so and also i think that’s shit, only a small shit bit nevertheless still a shit. Minor problems racking my brain.

As always, it depends on the terms of the contract. However it does seem like, from reports by journalists, that the transfer of ownership of the player takes effect whenever he signs/signed on the dotted line (which would mean that we will be deprived of his services for the first year of his contract) rather than the end of next/this season (which would have meant that we will enjoy the player’s services for the whole duration of his contract). Anyhow, I’m sure this feature of the agreement would have been a major point of negotiation between the two teams’ representatives… Read more »

He’ll have got a decent pay rise by signing for us but will be a relatively low wages compared to wasters like Mustafi. So if he turns out to be good after a season with us, we’ll give him a pay rise and extend his contract.

I still can’t understand why the money was not spent for immediate impact reinforcement considering we have very limited budget. But if it is b*llshit and we actually do have money, then this is a brilliant move for the future.

you do not know when exactly money has to be paid.

For sure there is an upfront payment to fend off Sp*rs bid.

Who gives a shit. Only plus side to this bollocks transfer is maybe the scum were interested, maybe. To be honest I hadn’t heard of him until a few weeks ago and he better be a fucking beast as we fight our back into the top half of the table next year.

Well, if you haven’t heard of him mate, I guess there’s no point in pursuing it.

Ok then closet scout …..honestly, how much did you know about him before he showed up on newsnow a few weeks ago????
We need a body to do a job now , not spanking £20m+ on a prospect….. but dont say anything close to the truth on here and be deemed negative, that just not the done thing.

I knew nothing about him – but as with your good self, it isn’t my job too. That’s what we have a scouting network for.

I suppose it is possible to buy for now AND later at the same time.

Not when you’re financially fucked as we are and going backwards at a frightening rate.

My Cousin Vinai
Reply to  Chrispy

Shorterminism is exactly what got us in the situation we’re in.

Crispy I agree with you. I am not a scout either and I can’t really see what is the difference between Bielik, Dinos and Saliba. Apart from that the first two are already here. What I know for fact is that judging by results we can turn into ass even Messi

If our defensive transfers (who will be at club next season) stop with Tierney then it might be back 3 still. Tierneys played that role before and Chambers seems like a back 3 Cb too. Hopefully not

This Saliba signing feels like receiving a shiny new toy on your 7th birthday but then your parents say you can’t play with it until your 8th birthday.

At least it suggests a bit of forward thinking

Your parents were a little on the harsh side

Not as harsh as my mates parents who raised him to support Spurs.

And he shall remain 7 years old until he turns 8.

Almost done apparently, although we haven’t persuaded them to let us have him straight away. Still, we needed movement on the transfer front and, hopefully, this will get things going (in and out).

Do we get another medical in 12 months?

We could give them the same sum as here but plus Kos (who needs to go now, and won’t get us much cash anyways) in in exchange for Saliba arriving straight away..? Everybody wins right?

1) Saliba – I don’t get this deal. To me it is distraction from not doing what we really need by adding a truly top player at Cback. You watch the Fiorentina match and we are still littered with mistakes, not just Mustafi but also mispasses aplenty with Monreal, Chambers even Sokratis. Buy Saliba (even at installments) and they can say they did some business but a) It will still take money away from other areas in real need of a higher spend for quality. b) He won’t be available if he is loaned out. c) Hopefully if he isn’t… Read more »

There are IMO better young French Cback options pob who can be sought for immediate impact.

The pair of Ibrahima Koyate and Dayot Upamecano at RB Liepzig for instance. The German club was extremely stingy letting in ONLY 29 goals all season and BOTH players have featured in WAY MORE games than Saliba.

I’m struggling to digest why we are (eventually) paying 29m for Saliba and loaning him back out.

But hey, some fans will be pleased never mind substance.

We need someone ready now and immediate impact.

Again in Fiorentina game, (granted midfield run by teenagers) far too loose at the back and not just Mustafi (isolated in a back 3) but Monreal, Sokratis, Chambers as well made poor passes/mistakes.

We continue to pretend we are fixing things at the back and then surprise ourselves when defense is porous yet again.

Can i ask, does anyone know exactly what they check for in a medical? Surely the player is relatively fit if they’ve played enough games for the prior club?? Just out of interest…

My Cousin Vinai
Reply to  SayUncle

Medical isn’t about physical fitness but health; underlying musculoskeletal, cardiovascular conditions that may affect the future of the player/asset. He may have a heart defect for instance, which may rule him out from playing, which is obviously important if you’re signing him for £30M on a 5 year contract, etc.

So we pay his wages for 1yr, and then he plays for us for 4?

My Cousin Vinai
Reply to  SG_Gooner

Usually how it works with loans.

This is literally LANS when he does arrive next year.

Decent. Would 100% pick up Cahill on a free for the season though.