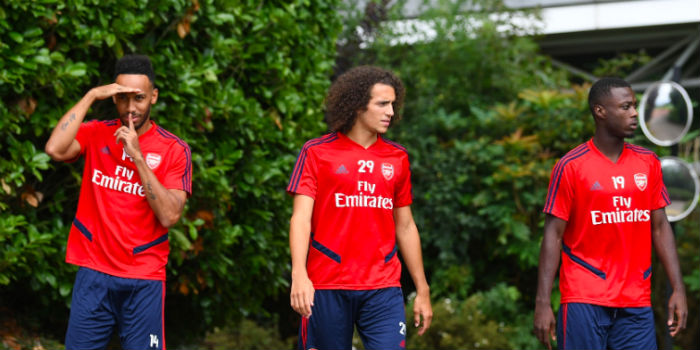 Pierre-Emerick Aubameyang thinks his attacking partnership with Alex Lacazette and Nicolas Pepe will be ‘crazy’ if Unai Emery can find a way to fit the trio into the same side.

The Gabon international was the only one of the three fit enough to start Sunday’s game against Newcastle – a 1-0 victory sealed courtesy of his 58th-minute strike – but he expects his French and Ivorian cohorts to be ready to make their own impact very soon.

A frontline of the club’s three record signings – they arrived at a combined cost nearing £177 million – certainly has supporters salivating and Auba is similarly excited.

“I don’t want to compare it [to other strike partnerships I have been a part of] but it is going to be crazy,” Aubameyang told the Evening Standard.

“Everybody is excited about that. We will have time to play together and we will see. I am looking forward to it.

“The next game we play at home [against Burnley on Saturday] and we will see what is the coach’s decision. It will be difficult for him [to fit us all in] but that’s the game. When you have a good team it is like that and you have to make choices.”

With Lacazette better in a central position and Pepe likely to operate on the right it looks as though Emery might have to field the versatile Aubameyang on the left of the attack. The 30-year-old says he’ll be happy to play wherever he’s needed to accommodate Pepe’s own attacking qualities.

“We are happy [he has signed] because we know he can help us to reach our goals,” said Aubameyang.

“So it is another weapon for us and that is very good. When I play as the striker I am happy but if the team needs help and I play wide, then I will do it.

“I have watched him [Pepe] on TV. I know how he plays and we have tried to connect with him in training. For the moment it is going very good.”

Arseblog News suspects that Saturday’s first home game of the season may be a little early to risk both Lacazette and Pepe from the start, but no doubt we’ll get a chance to see if Auba’s prediction is right soon enough.

Here’s a Monday earworm for you…

To be honest, this is one of the most exciting attacking line in Arsenal for the past few years.
We have a clinical scorer, one tricky winger, and one complete forward with few wonderkids on the bench.

Hoping for good things from them this season.

Calling Lacazette a complete forward is a bit much don’t you think?

I mean, ok, he’s not Messi… but he has pace (again, not at the very top level, but still), is an incredible finisher, can hold the ball up very well, and contributes defensively. Maybe the only thing he doesn’t do is score headers?

His first goal for us a header though:)

Fair play, I just meant in general, it’s not one of his strong points if we’re talking about whether someone’s a “complete forward”.

Does Messi head the ball often

Also, I forgot to add to my list – he can score some great free kicks

His first goal for us, just minutes into his debut, was a header. It was a brilliant one too.

That’s exactly what he is ! Did you here about Lacazette before he came to Arsenal?

What was in them? Cereal? Soup?

I wish i could lick my own balls

Sorry i thought i’d just throw that in there

I’ll blue myself out

To do anything in the league we are going to need 80+ goals with our defense still not quite up to scratch. This front 3 could well be capable of delivering most of those goals if it works. Let’s all just hope it does as this could be our ticket back to the Champions League.

For now, it is what it is and it’s better than what it was. Let’s just enjoy the football.

I wouldn’t be surprised to see Pepe and Ceballos taking a while to settle. I think we’ll be reliant on improvements from Niles, Torreira, Guendouzi, Leno and Chambers who are all a year older, Aubameyang and Lacazette being even better this season, and also how well Bellerin, Holding and Tierney recover from their injuries. I’d really like us to renew Emery’s contract, this was always going to be a 3-4 season project. Managers don’t get anywhere near enough time to work, and as long as Emery has the support of the dressing room? I think we should give him time… Read more »

We were 12 points off 4th place, and 37 points from first place….. I love Arsene, but we were clearly in a state of steady decline, our squad unbalanced, some of the decisions making erratic, and our transfer strategy and squad planning non existent. The day we started Bellerin at left wing back, it was clear to me that the game was up. Emery has identified what’s wrong, it’ll take him a while to mould this squad, but he’s clearly stated what our problems are: * Lack of wingers * investment needed in defence * Technique without physicality in the… Read more »

In the PL, Pepe will get chased and clobbered in every game. It will be tougher for him but he can win a lot of free kicks and PKs for us with the VAR. I do not think his favourite dribble “roleta” will work for him too much in the PL. It will take a couple of months with a lot of work in the gym as well. His talent will prevail, I am sure.

Lack of depth in quality is one issue. Lack of solutions for the Cback role (still ignored if evidence in the desire to retain Koscielny and then add band aid Luiz is to be considered) Lack of technical ability with loss of Sanchez. Arguably even with him, we were lobsided to a left bias attack which was easy for defenses to predict. Now that we have Pepe, we do ourselves no favour and lose iwobi. Midfield control also an issue and the jury is still out. Cebellos debut passing completion hardly instilling confidence but tempered by the fact that he… Read more »

Funny you. He’s African, did you watch the AFCON games how very physical the games were? He’ll absolutely cope very well with the physicality of the EPL.

HAHAHA!!!
You had me going there for a second you mad Bastard

They could easily rival the Liverpool trio of Mane, Salah and Firmino. Let the good times roll.

I think so, too.
And I hope Emery will give a try to use Laca in the role of Firmino, bacause he played well in that position in the pre-season and Aubameyang seems to me much less efficient as a classic left-winger.

This tempered by possibility we may lose Laca or Auba next summer so the purchase of Pepe with potential function up top (and Martinelli) in many ways a hedge against this.

Of course if we over achieve this season (if), we stand better chance at full retention.

Dear Santori, did Auba and Laca tell you they are unhappy or underpaid at Arsenal?

the pool trio are so good because of the play system. We don’t have any effective style to utilize our wingers, except the usual cut-back routine.
New patterns of play need to be used. tracking wing runners, stretch the pitch, fast distribution to the flanks to give our wingers chances to beat their man.. as it is we are very slow in moving the ball.

Guendozi is partly to be blamed for that, he seem always very lethargic in his ball distribution

It will be a few months yet, but I am anxious to see how opposing left fullbacks deal with a fit Hector Bellerin playing behind, and overlapping, Pepe.

and then there’s also Tierney on the other side.
We should be quite frightening going forwards this season.

We can also employ Kolasinac AND Tierney on the left.

Would have been better to have kept Iwobi but Nelson shows promise. Depth more an issue so the Bosnian could be useful. Very useful.

SillyBilly
Reply to  A Different George

When our defence settles down and we reintegrate Torreira’s ball-winning ability, we should be much harder to handle this season.

I think at least one of Willock or Guendouzi would be kept in a front 3 scenario purely for energy levels.

Granit will sit at the base to orchestrate or put out long passes (he made two against Newcastle, fantastic balls from deep prob not mentioned by 7am)

Then its one of Torreira or Cebellos for a bit of bite or control IMO.

Why do you seem to love our worst players mate? You one of them in disguise?

Still early days. Cebellos yet to find his feet. Misplaced passes galore. Pepe a muted debut, but its important not to weigh his price tag on his shoulder and I think that’s prob what Unai tried to help defray in his ear before he came on. Martinelli put himself about usefully but clearly not Iwobi whom I felt we should have kept. BUT the prospect of a front 3 with Pepe, Auba and Laca is one to salivate over indeed. We will have to sort out midfield though into a unit to support this attack. High energy Guendouzi and Willock… Read more »

I think we can best sum it up, fairly, by saying that it’s very early days, there are a lot of new (or newish) faces now challenging for first team places, and that this is all happening against a backdrop of “real” games (not friendlies) coming thick and fast. Emery and his colleagues will need all their management/coaching skills to get the best from this new mix. Some Gooners will also need to manage their expectations because there will be highs AND lows coming along. Common sense tells us we’re not going to go from a pretty mediocre performance last… Read more »

I’m ready for the PALM effect!