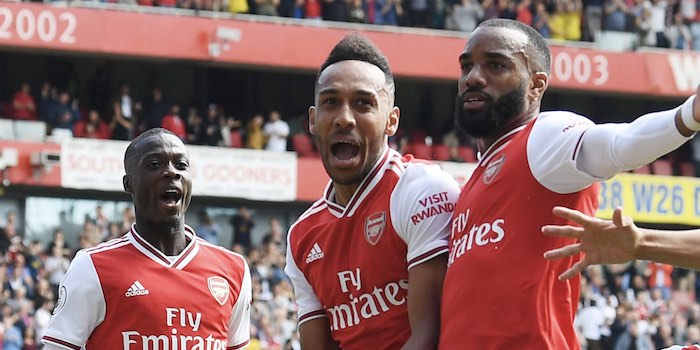 Pierre-Emerick Aubameyang says that he sees similarities between the potential Arsenal front three, and the Liverpool one which helped fire the Mugsmashers to Champions League glory last season.

The striker was speaking ahead of the game at Anfield on Saturday, and responded to an oft-made suggestion that he, along with Alexandre Lacazette and Nicolas Pepe, could replicate the efficacy of their counterparts.

“As we’ve seen from last season, Liverpool play with three up front and they play very well, he told Sky Sports.

“Why not us? I think we can do it. I see a lot of similarities.

“Pepe and me, we are quick players like Mane and Salah, while Laca is a player who can keep the ball and is really good with his feet like Firmino. So yes, we can say we are close enough.

“It will be a tough game against them. They are great players.

“They always try to go forward and try to get goals and assist each other. They are one of the best trios in the world.”

Arsenal go to Anfield looking for a much improved performance from last season when, despite taking the lead through Ainsley Maitland-Niles, ended up on the wrong end of a 5-1 scoreline.

Our eventual front three combined more goals and assists between them than Liverpool front 3
three last season, howbeit, with Pepe playing in a different league.. I agree with Auba, if those three are allowed to played together, we might have the most fearsome attack in Europe..

Agree. Maybe my glasses are red and white shades but I think Auba is atleast as good as Mane, Pepe can match Mo as well but Laca is definitely better than Firmino.

As much as I wish that were true, it’s really not.

What? Láca is much better than firmino

Dustwolf83
Reply to  Jack but

I’d include Ceballos and say we’ve got the CLAP.

That jibe had Sokratis giving his thigh a SLAP

i would rather we gave liverpool the CLAP 😉

In that case, let’s include Ozil and call them el CLAPO

Lesster
Reply to  Jack but

Ceballos behind them makes it CLAP ?

Don’t forget OPAL when Mesut’s back

Not sure Mesut will be back.

Get Ozil fit and firing and we’ll have an embarrassment of riches, a jewel in our attacking crown…. OPAL

Will be brilliant if we can get a result at anfield. My main concern is how Monreal’s lack of pace is going to fair down the left hand side against salah/Alexander arnold

Montreal is one of our trusted general

Monreal is solid but he’s never been particularly quick and isn’t get any faster. Having another slow player like xhaka as his cover for that left hand area is a recipe for disaster in this particular game but with kosasinac lack match sharpness he’s our only option.

Aaron
Reply to  Jack but

And indeed, a beautiful city.

A Different George
Reply to  Db412

I think one of the keys is Aubameyang forcing Alexander-Arnold back, where he will need help from the midfield, probably Wijnaldum (Alexander-Arnold, despite the hype, is still not a very good one v one defender, though he has gotten better). That opens room for our midfield. I think the other key then is whether Monreal, with help from whoever, can keep Salah in check on the counter.

There are similarities, though Aubameyang and Mane aren’t like for like. The big question for us will be getting the best out of Auba on the left when he actually prefers to be in the middle. Should also be said that Liverpool’s front 3 benefited from playing in front of a solid middle 3 which was both physical and technical, and was supported by probably the two best attacking fullbacks in Europe.

Bellerin and Tierney fit will run them pretty close, and if Ceballos and Torreira form a strong partnership the centre of the park will be much stronger than last year.

On another note, had auba scored the penalty against sp*rs, we would have been in the top 4.. Just saying

Not for certain. Had he scored we may have still drawn or lost that game, and we may have ended up losing any number of games after it. That penalty miss brought the moments that followed, but had he scored an entirely different set of events would have happened.

A Different George
Reply to  Luke

Well, nothing is certain about the rest of the season, but we would surely have won that game–the penalty was in injury time.

Fist of all, the ‘top four, top four’ narrative is toxic. Stop f*cking crying about it. We were in the competition for 20 years in a row and used it to pay off our new stadium. So financially, it was great for us. In sporting terms? We did our brand untold amounts of damage by sending out banter-era teams to play guys like Barca and Bayern. So I’m glad we didn’t qualify with yet another substandard team. When Arsenal build a team worthy of competing in it, we’ll be good enough to qualify. Until then, stop whining about top four… Read more »

Bless you. I’m just tired of having to reply such ingrates.

I hope we win. Of course I do. But I’d be thrilled to settle for a draw and then whip the hell out of the Scum at home next week. I hope we play the same midfield as last week. The energy and enthusiasm was brilliant. I’ll take a can-do attitude and hard work over potential talent any day of the week. COYG!!!

Not the same midfield hell no !… Too inexperienced…Torreria has gat to come in for Willock for this one….He’s a good reader of the game with good work rate and an experienced head Maitland Niles…Sokratis…D. Luiz…Monreal Torreria………………… Guendouzi Ceballos Pepe…………… Lacazette ……. Aubameyang Substutes Reserves Nelson Mhkitaryan Willock Chambers Xhaka Martinelli Ozil Saka Kolasinac Bellerin Chambers Tierney Martinez Holding This Is A Starting 11 Without Bellerin, Tierney, Holding Or Saliba in it…The competition for a starting spot will really bring out the best performances from all these players as well as the best from Arsenal as a team once everyone… Read more »

Had auba scored the penalty against Spurs, we would have been in the top 4, just saying..

Don’t take this the wrong way but you’re frankly an asshole. Just saying.

And had my uncle been a woman he could have chosen to be my aunt.

I jest, I jest…in all seriousness though, I’m looking forward to seeing these 3 play together consistently. Reckon they’ll make some noise!

Well, Liverpool did take home the Champions League, so I daresay their front three is more dangerous.

I agree, I think we will have a formidable trio – but it will probably take a while. Rome wasn’t built in a day and even Liverpool took longer than that to get their three together.

He makes an interesting point but there’s one difference: the Liverpool three have proved what they can do over time in the EPL, but for obvious reasons, our three haven’t. It’s another of these stories in the run-up to the Liverpool game that really highlights the difference between saying it can be done (us) and having actually done it (them). You could sum it up by saying: “We hope; they have”. I guess all this is inevitable given the rapidly increasing expectations among some Gooners following the Summer transfers, but we’ll only get a better idea on Saturday evening when… Read more »

Without a solid defence we are unlikely to do well. I’m hoping that over the course of the season and as injured players come back we might develop that good defence. But from the first two matches I am still unconvinced. I doubt we’ll be able to do well against Pool tomorrow.

I still think we’re better of now that Mustafi has been removed from the squad, if not off the books yet. That certainly doesn’t mean all is well defensively, just that we’ve reduced – but not eliminated, of course – the odds somewhat against making costly defensive “blunders” (to use a polite word). Luiz should help here as well, but Anfield will be tough. I’ve a feeling we could sneak a point but it’s going to take hard work and concentration over the 90 minutes.

Certainly looks like we have the promise of being able to replicate the sort of fluidity the Liverpool front 3 have. Pepe gives us the player we have needed for many seasons now not addressed by Mslintat. Arguably we needed a Right sided wide player since when Alexis was AT the club. We had opportunity to spend and get in (a wantaway) Mahrez before his price was jacked up by City at the very end. Instead we got Mhkitaryan (to add to Ozil and Ramsey already…and we did not extend Ramsey early enough) With Pepe (or for that matter any… Read more »

Its the backline of course we should be more concern with.

We are not as strong as their backline.