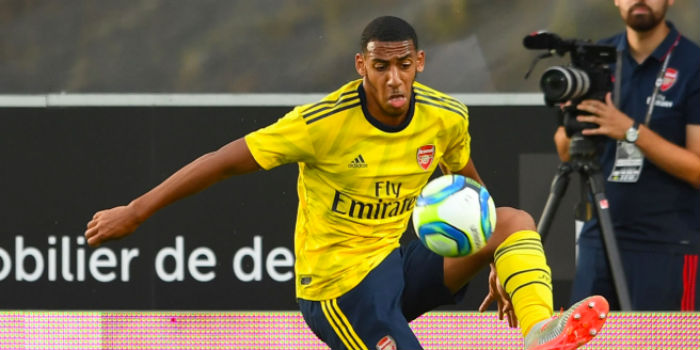 Arsenal have confirmed that Brentford have signed youngster Dominic Thompson in a permanent deal.

The 19-year-old left-back featured against Colorado Rapids, Fiorentina and Angers in pre-season and was also part of the squad that travelled to Barcelona last weekend.

If he thought he was edging closer to regular first team football, it appears the club were thinking otherwise.

In fairness, it can’t have come as too much of a surprise. Our pursuit of Celtic’s Kieran Tierney has been very public and Sead Kolasinac and Nacho Monreal are also ahead of him in the pecking order.

Anyway, best of luck to Dominic at Brentford. They are a club with a decent scouting department so they must have seen something they liked.

what a shame. Actually he can provide cover if kola or monreal goes this summer. good luck lad.

How much did we get for him?

Hold the phone, Blogs is telling us it may be as much as £3M…not bad…

Did he mention the swan?

Arsenal had the swan valued after the deal, apparently it was an original from the Song Dynasty – worth £3M. Brentford thought it was only a replica worth a nominal fee. Raul going to work again!

Genuinely surprised by this.
He looked very promising as a left back. I thought loan would make sense and he would be a long term understudy to Tierney as Nacho is old and Kola is Kola.

Just hope we at least put in a buyback clause like what City just did when they just bought back their own academy LB.

Celtic just bought Brentford’s left back to replace Tierney. It’s a bit like the Girud/Batshuayi/Auba deal in that we had to let Thompson go to get the player we wanted

A strange one seeing as we will probably be looking for a 2nd choice left back next summer when Monreal’s contract expires and given we were trying to sell kolasinac.

“The year of youth development” narrative has certainly had it’s foundations shaken more than a little.

Mustafi will cover left back next season

Cover? Or sprawl himself all over that general region of the pitch?

This is the occasion to point out that this season is the final one at Griffin Park for Brentford. New Stadium next year – and it looks quite good too. Small and quirky. A Bit like Brentford themselves.

Sadly Griffin Park was legendary and unique for having a pub’ on all four corners of the Stadium.

Another loss to English Football.

Put the nominal fee towards upping the bid for Upamecano

Swans are properly of the crown. Send him to the Tower.

And also the property…,,

Make sure we get it valued first.

Fuck it..more money in the coffers to buy good players. Sorry Dominic, good luck to you

Yes, good luck to him although I’m not sure what part of a good player the “nominal” fee we reportedly got for him would buy … a big toe, perhaps?

This is our reality now. I was a bit disappointed as he looked promising but clearly they didn’t see enough in preseason to keep him. Good luck to the lad…I hope we have a buyback or sell on clause.

It seems most of the these youngsters are been groomed to be sold later, how many of them were given enough playing time and how many were promoted and are being used….. except a very few!

I’m not sure how we would be able to give all of them the playing time needed to get a firm impression of their abilities (outside the reserves etc). but I do agree that we seem to be releasing/selling quite a few that you could say never really had a chance.

Some have gone on to surprising things at other clubs and are certainly worth more than we got for them, if we got anything! OK, you win some, you lose some – but we don’t seem to be winning many.

Can’t say I managed to watch much of the preseason so haven’t watch this guy much. Always a shame to lose a young left back, we had some luck in Cole and Gibbs. Next season Monreal will most likely leave and Kola isn’t good enough for a left back in a 4. So with Tierney who gets injured a fair amount you would think we might hang on to a young promising left back in the hope he could provide cover. Loan may have been best but who knows how much he was pushing for more games. Good luck to… Read more »