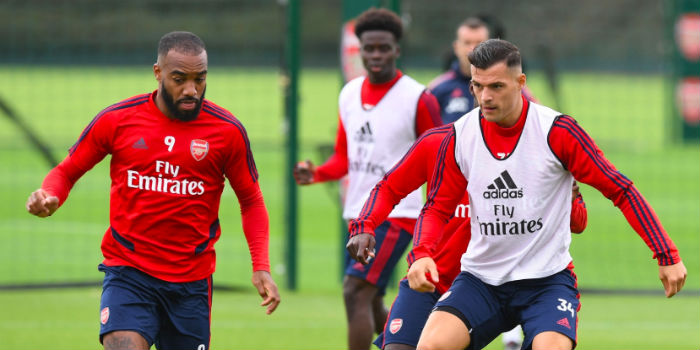 Alex Lacazette looks set to be part of Arsenal’s squad to face Newcastle on Sunday after taking part in first team training today.

The Frenchman has been nursing an ankle injury for a couple of weeks since limping off in the Emirates Cup and missed last weekend’s match with Barcelona.

Mesut Ozil and Sead Kolasinac, ruled out of the game due to ongoing security issues, were absent. We also know that Kieran Tierney, Hector Bellerin, Rob Holding, Dinos Mavropanos and Emile Smith Rowe are out injured.

While plenty of players are available, the fact some have had more of a pre-season than others makes picking a team slightly more complicated for Emery.

We wouldn’t be surprised if Pepe and Torreira, who were both late back from international duty, started on the bench, which could mean a starting XI that looks a bit like:

I’d start Luiz. Despite not training much with the team he is a better defender than chambers, and away from home we need the strongest team possible.

Yes, if he’s match fit he’d be first choice. However, our success this season in closing the gap (of varying degrees) on the teams above us will depend upon the squad as a whole so we’ll have to see how Chambers copes sooner rather than later. He wasn’t convincing before he left for Fulham but he may have improved.

I’d rather trust chambers for a home match. Our away record for the last two seasons says we can’t take this game for granted.
Brazilian international centre back walks into the team for me

He told the club doctor he was perfectly fit at his medical, and had the full pre-season with Chelsea so he should be good to go

But he needs to know how to play in partnership with Papas.

So does Chambers tbh. They have only played together in patches a few times in preseason. I’d go with Luiz and Papa.

I totally disagree. When he was loaned out he looked our best central defender.

This team would mean only 4 out of 11 from the potential first team, when everyone is fit. Good enough for Newcaslte away?

Which Newcastle player are we going to make a hero out of tomorrow?

That’s “negative” talk and the small band of Gooners on this site who object to anything like it will probably inundate you with negative votes. Beware.

Like the Jewish community, it’s our morbid sense of humour that makes us who we are and gets us through the dark times. I think people get that…

In answer to your earlier question, it has to be Andy Carroll. The football gods love than man as much as they hate us

I don’t relate to Jews. Sorry.

I don’t relate to bigots. Sorry.

What the fuck, get out of here.

They have quite a sizeable jewish community south of the Tyne. Maybe that’s how Newcastle fans have managed to not off themselves.

Almiron to score his first goal??

Rashford never properly thanked us for making him the ‘star’ he is today.

Good news. Emery talked about closing the gap on the top two and they both won their opening games in convincing fashion – particularly City.

Newcastle is the kind of place that we need to get results at. We did it last September so let’s hope a “new look” Arsenal can do it again.

Even though they left it late, Spuds also won theirs in convincing fashion; they look really strong to me, even without Ali, Lo Celso, Sessegnon, Son playing. I wish GUnners would take 31 shots when a team sits back like that.

They weren’t that convincing until Ericsson came on in the 2nd half. And he’ll be gone in the next couple of weeks hopefully….

The stats say 31 shots but most were wayward and desperate. They were over committed too. A better team than Villa would have picked them off on the break quite easily IMO.

That’s my favourite Arsenal player by a distance.

Best player in our squad imho…

I don’t think Luiz can play tomorrow. Iwobi was prevented from playing for Everton as the paperwork wasn’t completed by 5pm. Arsenal I believe put a deal sheet in for Luiz too, so it’s unlikely he was registered by 5pm.

Isn’t it pretty obvious to start Ceballos in the number 10 role? I’d pick him every day over Nelson.

I would pick Luiz, Guendouzi, Ceballos instead of Chambers, Willock, Nelson.

I apologize if i offended anybody yesterday with my comments

Also, I love this community!

AMN at right back and Xhaka and Mhkitaryan in general are the only concerns, otherwise there’s more than enough there to see off a Newcastle side that look setup to fail. Three points is a must because our next two games after could very easily see us take 0-2 from 6 and as last season showed a single point can make a world of difference.

They will play 3-5-2 so I think we will go with a back 3 as well if Luiz is available. Monreal left wing back is not ideal but think he could do it. 3-4-3 seems to suit the players we have who are most fit and available: