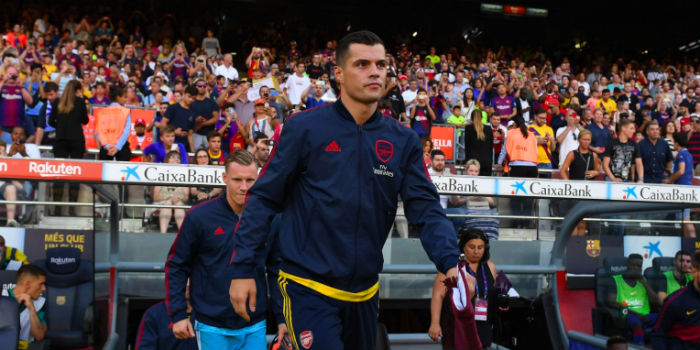 Granit Xhaka says Unai Emery is yet to make a decision on who will be Arsenal’s club captain this season although it’s looking increasingly like the Swiss will replace Laurent Koscielny.

The Frenchman’s decision to go on strike this summer means it’s almost certain he’ll be stripped of the armband (whether he stays or not) and not for the first time in pre-season, the midfielder wore the armband ahead of Nacho Monreal and Mesut Ozil as the Gunners lost 2-1 to Barcelona at Camp Nou.

The boss has spoken publicly about having five captains in his squad this year, including an English voice, but it appears he’s yet to confirm who will do what.

“Nobody has spoken about the captain’s armband,” Xhaka told Arsenal.com.

“The coach hasn’t decided but if I have the armband, of course, I will be happy it’s something special but in the end, we have to all be captains on the pitch and outside out of the pitch because we need everyone.”

Xhaka also had his say on last night’s performance which saw the Gunners play well in the first half but then concede sloppy goals in the second. Having done much the same against Real Madrid and Lyon in recent weeks, he says the players must learn from their mistakes.

“I think we have had the same situation in the past as well,” said Xhaka. “We played very good but in the end we don’t take anything. We have to learn to concentrate throughout the 90 minutes in future to take something.

“Of course there are positives and negatives as well. Today we played against a good opposition in Barcelona.

“The first half was very good, the second half was OK. We were under a bit more pressure than in the first half, but in the end we have to improve. We have to look at the bad things and keep the good things.”

He added: “In pre-season you have to work and be fit physically. It was the last friendly game for us, we are happy it’s finished, we start next week away against Newcastle and I hope we will be ready for the first game and take something back to London.”

Considering that recently being Arsenal captain seems to be a prelude to leaving the club, I say give it to him.

Give it to Mustafi…

Id rather give it to Mustafi then

Gunnersaurus is my choice.

He turns up for every game, always has time for the fans and has more mobility than Xhaka and a footballing maturity that Mustafi can only dream of.

Has he recovered from that penalty to the head at the Emirates Cup?

Doctors actually declared him extinct at the scene. But someone had a mosquito with Arsenal DNA in and he’s back in training with the under 30,000,000’s.

And they hardly play. YES!

If we are going to start taking the captaincy seriously at Arsenal, Xhaka should be nowhere near the armband.

Midfield three of Willock, Guendouzi and Torreira would be my first choice right now, go for pure energy. I find it difficult to believe Xhaka is going to suddenly iron out the errors that have plagued his game as long as he’s been here. Happy to be proven wrong if the seemingly inevitable captaincy appointment propels him to new heights of course..

Surely Ceballos has to get a look in. I love me some Willock, but think his gametime will be managed over the season. But he has to start cup games and EL fixtures!

I’m certainly hoping Ceballos makes his way into the starting XI relatively quickly, but purely because he’s been involved with the squad for such a short time I can’t see him starting for at least the first couple of games. If it weren’t for how much Guendouzi was played last year I wouldn’t think Willock would have much of a shot, but he’s been absolutely fantastic in pre-season (from what I’ve seen). If he comes in and does well I can’t see him being dropped for Xhaka.

I’d play Ceballos instead of Guendouzi, in a midfield 3.

Sounds tasty but won’t happen this season definitely one for the future though.

At 5 captains, the role seems so watered down. Plus the problems stated above with Xhaka’s tendency to make mistakes, I can’t be sure I care!

In other news – there seems to be some discussions with Bordeaux and Rennes about Kos, maybe they have a good CB we can pay and sign!

Captain my arse. As blind to pressing midfielders as Smith was to icebergs on the Titanic. Full steam ahead

Xhaka as captain? After 3 years at the club he should be someone integrated into the team, the club and the fans. Fact is he is getting worse. He was terrible last night again. I honestly don’t see any value as having him as captain.

Instead of “I hope we will be ready for the first game”, why not be more determined and say “we will be ready…” This is why he should NOT be captain!!!

I think Sokratis or Lacazette as captain are the best options.
What I do know is, there won’t be many 0 – 0 this season.

Not that there were a lot of 0-0s last season. I can only recall Sporting at home

Yep, I agree with this. Maybe Nacho would be another shout, but not sure if he’ll play too regularly and it seems weird to have your captain at fullback.

I think it would be more accurate to say that Unai has decided on the captaincy, but hasn’t necessarily told the players’ concerned, nor put the info in the public domain.

“We played very good but in the end we don’t take anything. We have to learn to concentrate throughout the 90 minutes in future to take something.”

How many years now has this been the case!?

Yep. “Blah blah concentration…blah blah mental strength…blah blah working to eradicate the problems”. Unfortunately talk is cheap. Mustafi is a walking time bomb, Maitland Niles just can’t concentrate for a full game, Xhaka makes the same mistakes for his club as he does for his country so where is the imorovement defensively going to come from?

Xhaka would be an excellent Captain Lacca must be a frontrunner as well.

I personally see his future in another league were I think he could really dominate and be seen as a really big player I just think this league is a bit too fast paced for him every team presses and you don’t get time on the ball here and he isn’t fast enough to be cover our rear on counters although a different setup would help him.

I’m being dead serious Xhaka is not that good to start, I would start Ozil, Torreira and Ceballos over him, and if he’s being looked at as a Captain, it just goes to show the lack of Leadership we have at Arsenal!

Its bollocks,? Five captain’s,, there should be just one main one and a back up, and xhaka should not even be at the club let alone a captain

Here’s hoping the capitancy makes him up his game! He’s probably only got one more season to prove his worth…