I know it was just a Championship team in the least important cup competition but man it sure was fun to see a free flowing attacking performance from Arsenal. The young kids were impressive, the players returning from injury looked good, and more importantly didn’t suffer any setbacks. It was everything that a fan could have asked for.

Arsenal 5-0 Nottingham Forest: By the graphs 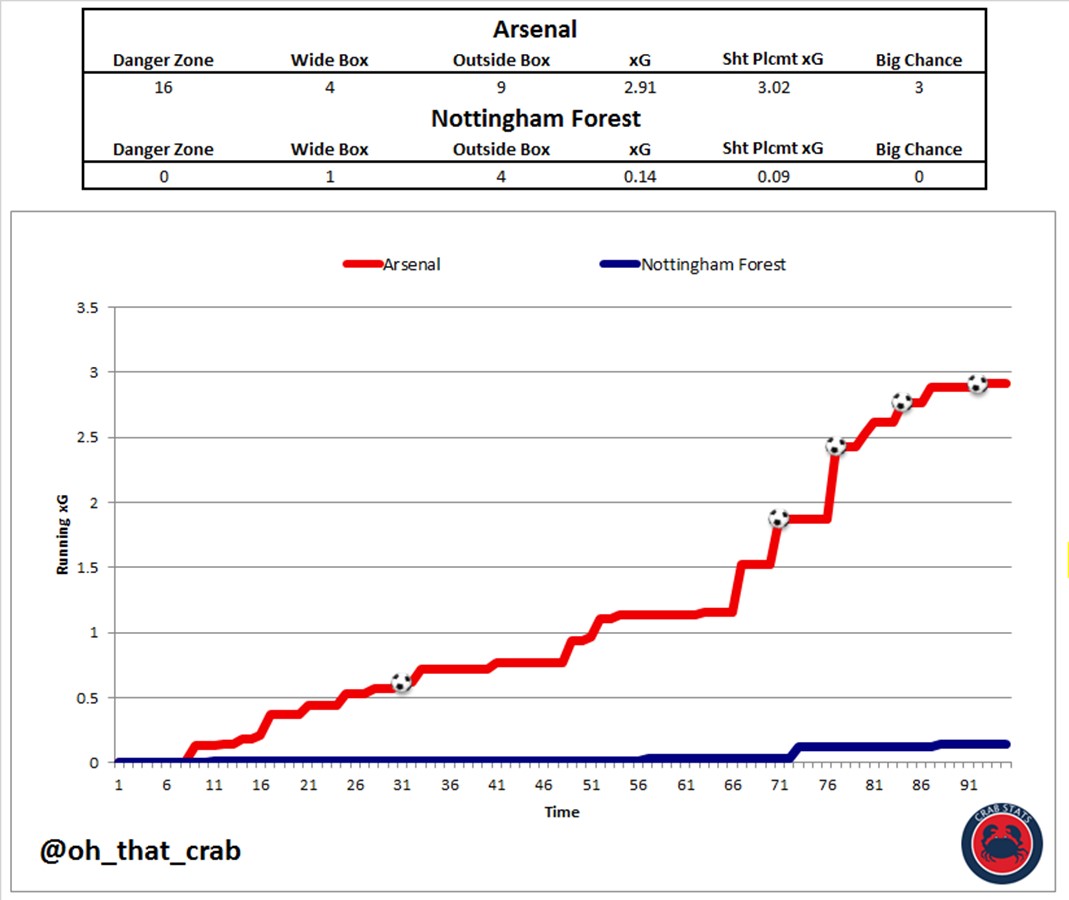 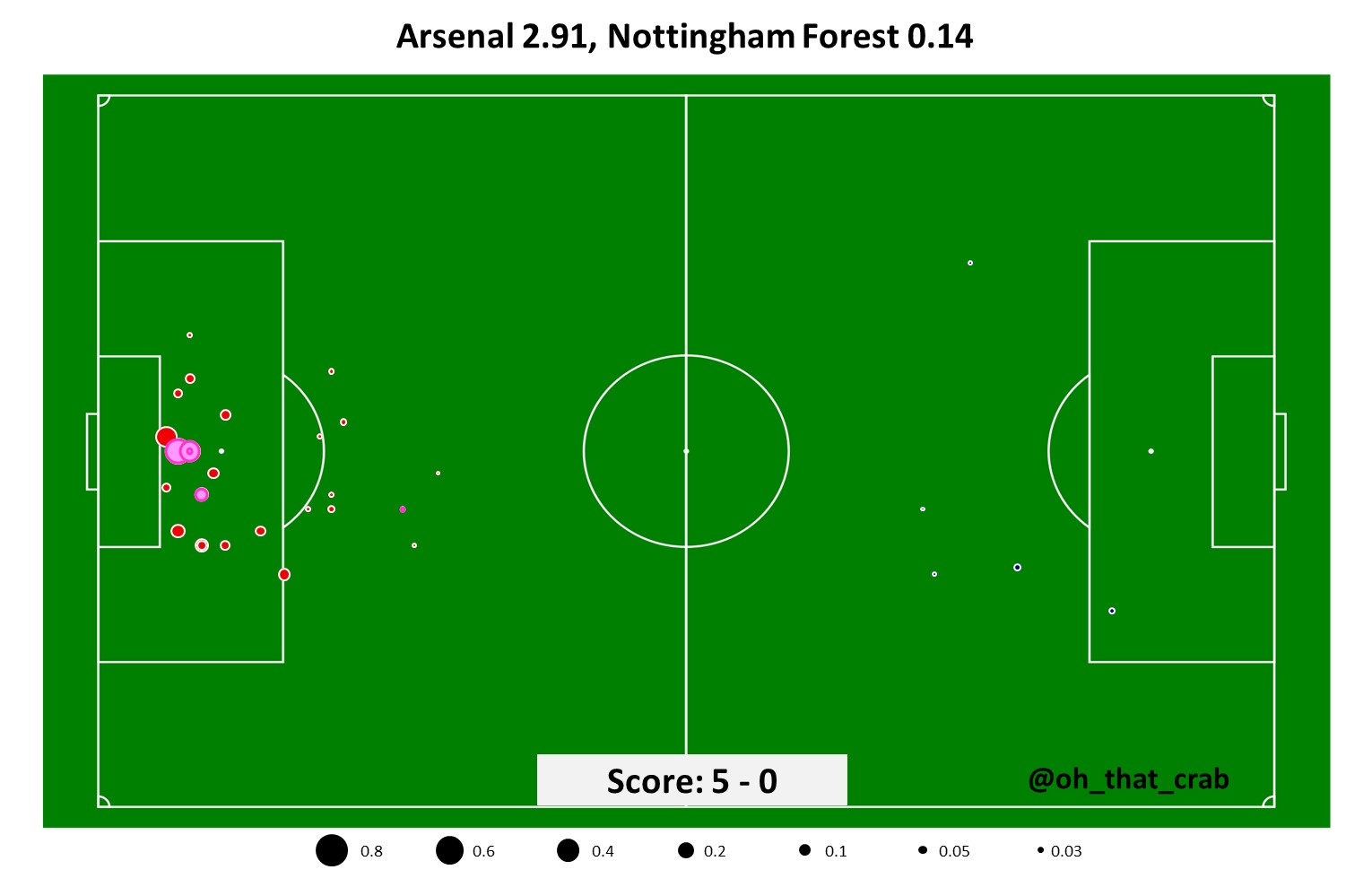 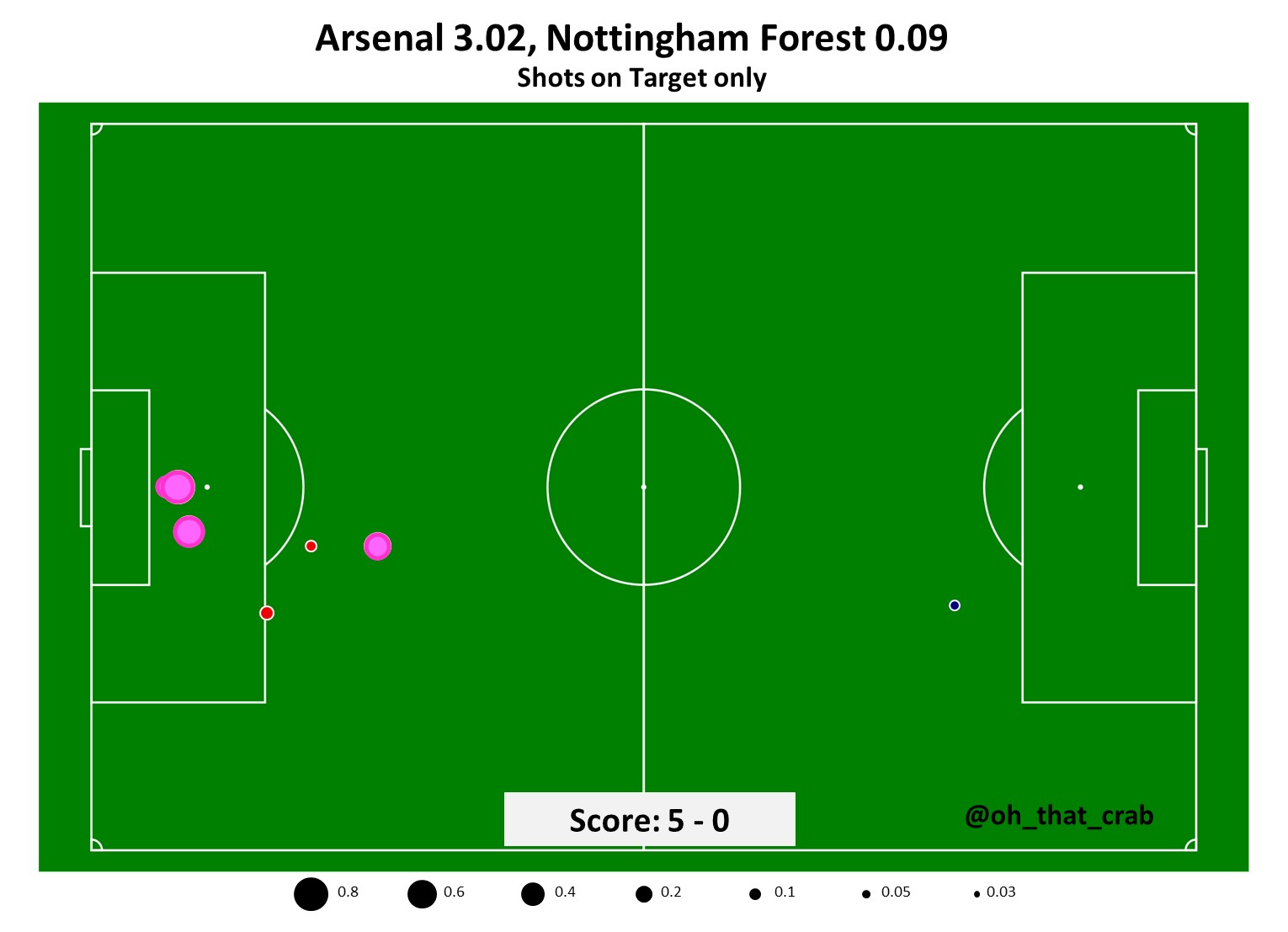 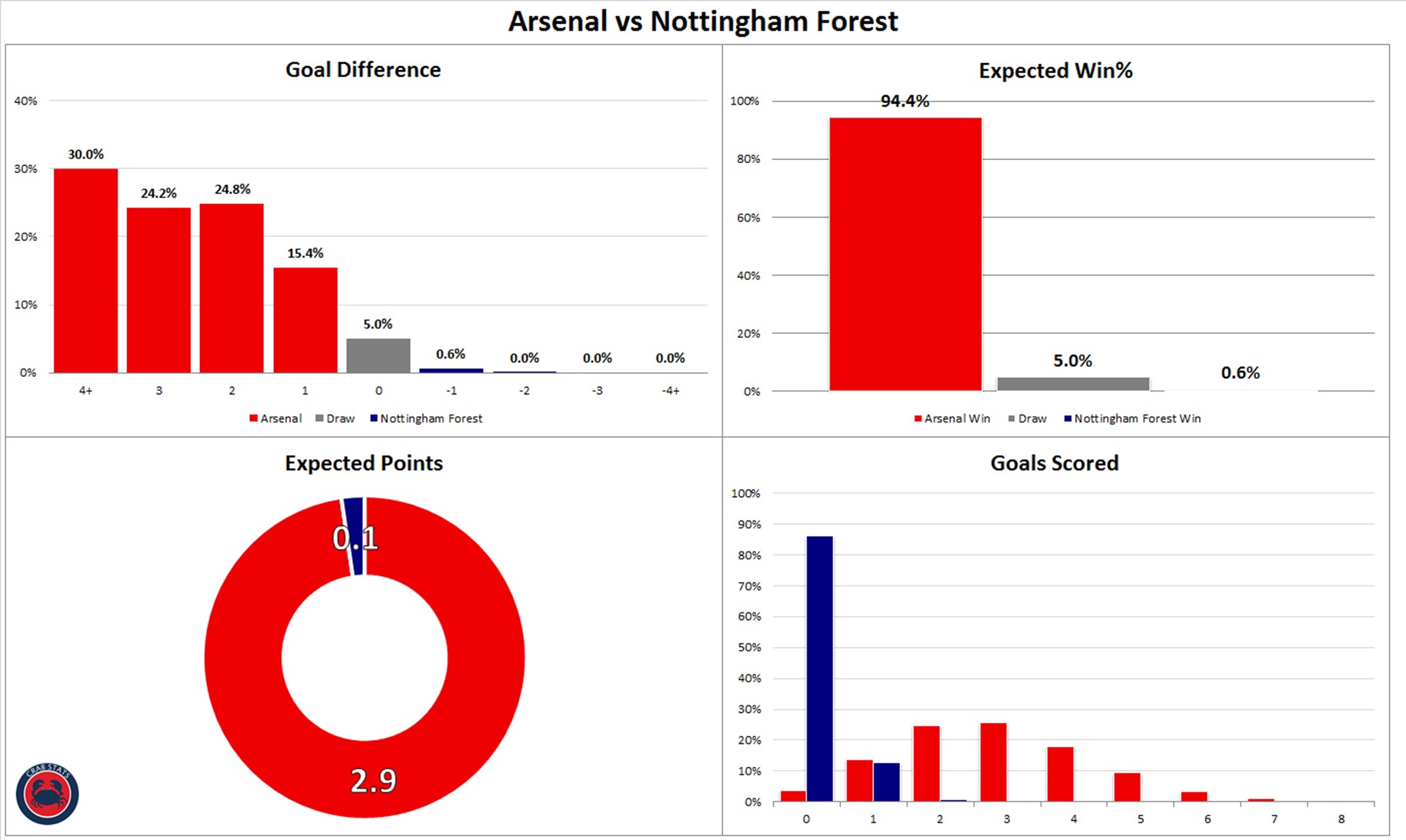 27 – Shots for Arsenal, compared to 5 for Nottingham Forest.

21 – Key passes for Arsenal, compared to 3 for Nottingham Forest.

6 – Key passes by Mesut Özil, led all players (Reiss Nelson was second with 4).

14 – Very deep completions (passes within 15 meters of goal) for Arsenal, compared to 0 for Nottingham Forest.

192 – Passes completed in the final third for Arsenal, compared to 31 for Nottingham Forest.

37 – Passes completed in the final third by Mesut Özil, led all players (Reiss Nelson was second with 36).

52 – Touches in the box for Arsenal, compared to 6 for Nottingham Forest.

10 – Touches in the box by Bukayo Saka (in just over 1 half!), led all players, (Reiss Nelson and Gabriel Martinelli were second with 8).

In just about every offensive statistic that you can list, Arsenal dominated Nottingham Forest. Not only that, but in all of these Arsenal had a player that by himself accumulated more of the statistic that the whole of Nottingham Forest. The very encouraging thing was that there wasn’t one player who dominated but a well rounded performance where all of the attacking players contributed.

A preview of Arsenal’s very near fullback future

3 – Dribbles by Kieran Tierney (tied for the most)

2 – Tackles by Kieran Tierney of 3 attempted.

We didn’t get to see them play at the same time, but Arsenal got the chance to see both of their future first team fullbacks for the first time this season in this match. Kieran Tierney started and looked like everything that Arsenal fans would have hoped. In the 72nd minute he made way for Hector Bellerin making his first senior appearance since his injury and was just about instantly influential getting a shot (blocked) and then smartly making a run after the rebound fell to Callum Chambers and then firing a perfect ball across the face of goal for Joe Willock to turn in. Things could hardly have gone more perfect for both of them in this match.

1 – Goal by Reiss Nelson, his first for Arsenal

5 – Passes completed in the box by Reiss Nelson

36 – Passes completed in the final third by Reiss Nelson

8 – Touches in the box by Reiss Nelson

Arsenal are set at striker and broke their transfer record on a right winger but they still have an opening for a player to make the left wing their own, especially while Alexander Lacazette is out injured. Nelson was given a shot to play their early in the year but couldn’t impress enough in his 117 minutes to justify putting one the strikers on the bench. He has another chance now to show he deserves more minutes (and at a minimum starts in the all of the cups for the foreseeable future). Against Nottingham Forest, he was easily Arsenal’s most versatile and well rounded attacker. He got time on both the left and the right, he was second in shots, while also providing the second most shot assists for teammates. He added important ability to progress the ball with the ball at his feet and with his passing. He an enormously talented player and now he has a shot to mack an impact at Arsenal.

Sources: Opta via Whoscored, my own database.

Saka nominated for PFA Young Player of the Year

Do you by chance have the stats for how many short goal kicks we took in this game? I can’t seem to remember any one.(I could be very wrong though). Thanks!

I can feel for Ozil, he he was really fine. Clearly upset with sub.

That can break a player’s spirit.
I hope the management will see the impact the sub had when reviewing the video. I would have rather subbed Torreira, we were not under any attack.

On two or three occasions when they broke forward, within two passes our whole midfield was bypassed. Torreria is great as a harrier but not great at keeping shape. Ozil has been having tough luck, he is put in to play and when he starts enjoying we give him a break.

Agree. Totally unnecessary especially as he was captain and doing a good job as shown by the stats.

Emery won’t be doing himself any favours with the fans if he treats him like this when he is playing well albeit against Forest.

Being subbed with 15 to go isn’t the end of the world, it was a good run out for Ozil where he did well. Players are never happy being subbed, and Ozil’s reaction in training and the next time he gets an opportunity, will tell Emery everything about where Ozil’s head is at. Hopefully he doesn’t mope around, and gives the type of reaction you’d expect from one of our most experienced players, he should be setting an example to our young guns on how to deal with setbacks. I’m not convinced Ozil has the hunger or desire to come… Read more »

Yeah and it didn’t make sense to get Ceballos out there anyway. He’s had a lot of action and the minutes weren’t crucial for him. Özil looked gutted and rightfully so. Was harsh for a guy that has played so little and played so well in this game, and as the captain, and was enjoying himself so much. I said before the game it would be interested to see Özil’s spirit in this game given he has been resigned to the Carabao cup, but credit to him he came out and went for it and put in a shift (still… Read more »

I m sure he saw that it was going to end with a lot of goals. It was obvious. Nottingam couldn t resist during 90 min.
Could have make some good things and build his confidence.
Thats weird what is happening between him and Emery. Would love To see what is happening on the training ground.

A P
Reply to  Nofuture

Martin Dufosse
Reply to  A P

Unbelievable . He was absolute SHITE. He can’t even dominate a game against a Championship side. You must be looking at a different game. This man is a lazy,good for nothing waster. He’s not interested in leaving because those two MORONS Wenger and Gazidis have him a kings ransom contract. We couldn’t give him away.

I think he was very leggy at that point, that really wasn’t a “statement” sub.

100% – clean sheet rate with mustafi starting at the back

Chambers was a BEAST in this game. His touch, crossing, technique, ability to turn guys has come on leaps and bounds…he looks like a legit full-back, and we know he is a good centre-half and DM too. He is going to make like very difficult for AMN. Pretty much makes him redundant in both his positions (RB and DM) as Chambers is clearly outplaying him.

For mine it was a toss up between him and Willock for MOTM (9/10 for both), but I give the nod slightly to Willock, who was exceptional.

I think we saw against AV that he is a bit slow for fullback when you actually have to defend. He is fantastic going forward, however. Nothing here about it, but he has been creating a load of chances, including a couple of key ones that were converted, in the last two matches.

I’d like to see him given a shot at DM, especially if Emery continues to avoid Torreira. I’m not sure about speed and there, but his talent needs to be made use of.

Love, love, loved this game. Every single player on the pitch was good in their own right. Cannot wait to see more but we need to play the right people at Old Toilet (Tierney, Holding, Torreira) from tonight

Spurs should take heart from Belgium being ranked 1 in Fifa which shows that trophies don’t matter.

Özil haters (including the manager, unfortunately) will never be convinced by his involvement when the numbers tell a different story. I feel so sorry for him at the moment ?

With all due respect to the player and his millions and millions of fans… grandmotherfuck his stats!! Özil is on de Bruyne levels of genius potential, but he simply doesn’t actualise it. He demands the ball a lot, whereby everything must go through him for his stats to make sense. KdB has other magicians constantly beside him, like the Silvas. He doesn’t need all the play yet he still produces. Why? Because he’s effective in his moments. Özil has possession, but nowhere near enough moments where he truly affects play. He is grossly inefficient to start with. What’s worse is… Read more »

That bears out what my thinking was after the game: we look so much better with Mesut in the team, because he is able to provide a central link to the midfield and feed others in the final third. Our attacking play looked so much for fluid with this sort of link, instead of the disconnected, unfed front line we have been seeing in the league. Have to say, whilst it’s the coach’s decision, it was a dick move to take him off. He was clearly enjoying his football, playing well and being effective, and his reward was to get… Read more »

and yet Xhaka, Luiz and Sokratis are already listed in the XI to take on Manure despite being the 3 worst players so far this season.

Let’s just see what happens, eh? And keep in mind: Arsenal playing Nottingham Forest at home in the Carabao cup is completely different in every way from playing manyoo at old trafford in the premier league. Miles apart. For years, AW would blood the young guns in the FA cup and Carling cup (now Carabao), saving starting XI for the premier league and the CL. Emery may well be following a similar approach (note: not the same, similar). There are plenty of games at this point, and Arsenal have a big squad. Saka did well in the EL, admittedly against… Read more »

I agree, I can see why he picks one of Sokratis and Luiz – but both simply do not deserve it on merit right now. And Xhaka should be no where near our midfield in a game like this (or any EPL game really) – he is so poorly suited and it has shown all season (and last year too).

I enjoyed the game, the results and also the fact we have “bodies” back and they all impressed. Let’s take this energy into old trafford on monday and get that result boys!!!!

One Stat you left out,
1 goal with Mesut Ozil on pitch, 4 goals when Ozil got subbed off

I just don’t get the Mesut Ozil radical fan club. Social media propaganda and cherry picked stats seem to fuel a frenzied defense of him in every situation.

I am no Emery fanboy; he is causing plenty of our issues, but if you really in your heart of hearts think Mesut Ozil being a central part of our team will improve it, you are deluding yourself.