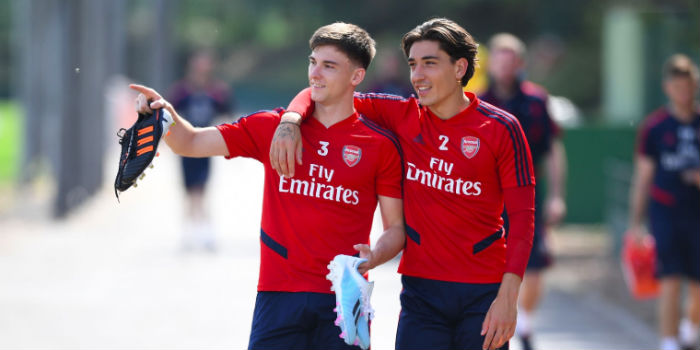 Unai Emery says that he’s hoping to give Hector Bellerin and Kieran Tierney some playing time as the Gunners face Nottingham Forest in the Carabao Cup this evening.

The game comes just two days after the topsy-turvy 3-2 win over Aston Villa, so rotation will be key, and with options in short supply at full back, it could mean a comeback for the Spaniard and an Arsenal debut for the Scottish international.

The duo played an hour of an U23 game on Friday, so it remains to be seen if there are any niggling aches and strains from that, but Emery sounded hopeful he could help progress their recuperation from injury.

Speaking to the official site ahead of the game, he said, “We are going to decide tomorrow but the first idea is if we can, they will have minutes on Tuesday.

“This is the first idea, but it depends on tomorrow for their feelings and the decision for the first XI because we played today and we are going to play on Tuesday.

“Holding for example, he will play on Tuesday and we are going to decide tomorrow with Hector and with Tierney if we will want to use them.

“I don’t know if that’s starting in the first XI or after from the bench, or if they are feeling well.”

It’d be nice to see them but obviously the most important thing is to manage their returns properly, so if there’s any risk, he’ll have to come up with something else.

I hope when that happens, Torreira is played as one of the deeper midfielder rather than more advanced like he has been asked to when playing along with Xhaka.

I don’t think a ‘best team’ can exist throughout a full season. Perhaps you’re right with your line up for now, even though Chambers and Holding at the centre of defence is a completely untested partnership, and we are only assuming nothing can be worse than Sokratis and Luis. Just like we are assuming nothing can be worse than Xhaka anchoring the midfield. The point trying to make is, players are going to go in and out of form through the season, and what I would like to see from Emery is his willingness to adapt to that. WIllock is… Read more »

Maybe, but the jury is still out with Chambers. For me personally, Sokratis has been quite solid for us over the time he’s been here. Maybe Chambers has a higher ceiling given he’s younger?

I think sokratis is good but always needs to be paired with someone sensible, ie not luiz or mustafi

I like it, but maybe in 2-3 seasons we’ll see the best of this team. This group is severely lacking experience.

If you’d fit in Ozil or Ceballos behind the front 3, I would have liked that team more, but can’t argue with your selection either.

Pretty much the best team we have John, although I would probably replace Guendouzi with Ceballos.

You realize Guendouzi has been man on the match in 2 of his last 3 premier league outings?

It is all about names and media coverage for some fans.

I’d have Willock and Guendouzi as a double pivot at the base of the midfield and Ceballos more advanced behind the front 3, but I agree with the rest. I like Torreira coming off the bench snapping at the oppositions tired heels in the second half. Seems more effective that way than starting.

God is a gooner
Reply to  BigArse

Nonsense. Our best performances in the last year have come with him starting. Liverpool at home and Valencia away spring to mind.

So we’ll see possibly out best back line for the first time.
Bellerin Chambers Holding Tierney

If they are all in form, they should start every PL game. Though we can argue Luiz we’ll find a spot there because for his technical ability and passing range.

Luiz has appeared to be not a good player because of players in front of him
and to be specific Xhaka, Sotrish and ALM-Niles… These three if i were a couch of Arsenal i wouldn’t play them they are a liability. I think even Unai Emery is not a good couch for Arsenal we need some one who can read a tactician like Simeon.

We need someone who can read a game like Simeon not this Unai Emery.
What has Xhaka done to be given the role of captain?

I mean, of course it would be great to get Simeon and I think that’s who the club will go for if they do decide to cut ties with Emery.

My only concern with Simeon is that, as far as I’m aware, he’s a secondary character in the Hebrew Bible and therefore not only dead but also lacking in the understanding of a transitional midfield and preemptive game management.

He’s sort of like a slightly more relevant Sean Dyche.

Haha.. Agree with you, don’t think Simeon is the kind of coach I’d like at the club, where we are accustomed to flowing, attacking, creative football. I’m going to get down voted for this, but I’d love us to nab Pochetino from the spuds.. Surely we are attractive to him and can pay him whatever he’s likely to get anywhere else in Europe.

Huh?! He’s a little fat bloke who gets results through rotational fowling, counter attacks and England’s best CF this decade. Overrated to high heaven, he still hasn’t won anything at all. Zero, nadda

“rotational fowling”
Ah, that explains the ‘chicken on a ball’ thing. Now I get it.

Is that rotisserie chicken? …Mmm tasty!

Fuck no, he may have done a decent job at Spurs but he’s a miserable bastard, Mourinhio-lite, and he’s just not a trophy winner.

The fact that he said he’d leave Spurs if they actually won a trophy (albeit the CL) because he’d have reached his peak, frankly says it all.

The Spoon
Reply to  HelderHughes

Well we’ve currently got moses in charge, certainly knows how to part our defence anyway. Willing to give a other guy from the bible a try. We’ve had several versions of judas, so it can only get better hopefully. Man City have Jesus so miracles are out of the question.

A slightly more relevant Sean Dyche is a frightening thought.

I certainly need to sit in the couch and try to understand your comment.

Going with the earlier theme, a messiah for hire from Antioch.

I also agree with Emery not being a good couch for Arsenal. Doesn’t seem all that comfortable to sit on.

Please can anyone tell me how bad our academy full back options are?

I have been asking My self the same question, there is no talk of any exciting full back left or right,

How bad are we recruiting defender.. Really No one..

Right back Jordi Osei-Tutu currently on loan at Vfl Bochum looked good in preseason last year. Don’t know how he is fairing over there.

The Spoon
Reply to  Hank

Had a fair few Gems over the years from Barca, only one really ever made it, before going back and failing miserably. Don’t know what happened to him after that…

Dave M
Reply to  The Spoon

i think we should give tierney and bellerin more time to gain full fitness. they should not be rushed back into first team, it is a bit too early

I agree, but 60 minutes or so in a game that we don’t really have to win is easing them back.

we have to win this

Looking forward to seeing these guys back, but also be good to see Nelson play a full 90, think he needs some confidence, and Martinelli get some game time. Haven’t seen much of him so far. Also good the big guns get a decent rest before the United game, who are there for the taking!

The only trouble is that we have been there for the taking too.

We rarely have any luck at Old Trafford. We make the worst teams in the PL look good at the moment. This would be bad at any time, but I can’t help thinking that United are one of the worst teams in the PL at the moment. I’m giving myself nightmares thinking about how many different ways going to Old Trafford has hurt us over the years and worrying that we might inadvertently kickstart their recovery instead of our own.

Somebody please tell me I’m being silly.

No it’s a concern. Especially how the only game united looked decent in this season was against Chelsea who went for them. United struggle against the deep block. We don’t even have a block deep or otherwise. Our forwards are going to need to be clinical as De Gea always plays well against us. Worried.

Genuinely think that Tierney will help develop Bellerin’s game. Where the latter is a bit weak the former is quite strong and every video seems to show them together. Would expect them to push each other. Maybe Tierney can learn from Hector, too.

Would absolutely love Bellerin and, to a lesser extent, Tierney, to get through 90 minutes tonight and effectively be ready for Old Trafford next week.

On a side note, Maitland Niles is banned for tonight’s game, so will be available for Old Trafford (unless he’s genuinely injured).

Tierney holding chambers bellerin. With a view to this in the league!!!!

Tierney holding beller in chambers is quite the sentence.

This will be my first time going to watch The Arsenal live, really looking forward to it. Unfortunately, I’m going on my todd now. Would any regulars be able to recommend any friendly local pubs?

Gutted Jenko won’t be involved though, main reason I got a ticket ?

From an article critical of Arsenal fans, their once proud history of class and how booing the team and individuals, even the captain. If you were a young star, knowing that your growth will include mistakes and even bigger mistakes. What type of environment do you think your agent, your parents and your friends will tell you is best for your long term development and happiness…is it AFC or a team like Everton, Leicester or others where high expectations are combined with realistic and supportive fans? Dan Smith…“ Xhaka’s substitution was cheered by a section of our fan base. The… Read more »

The fandom became toxic during the later years of Wenger’s reign protesting the state of the club back then, but now with a new manager and a new structure in place patience is required. But guess what? The toxicity is still just as bad.