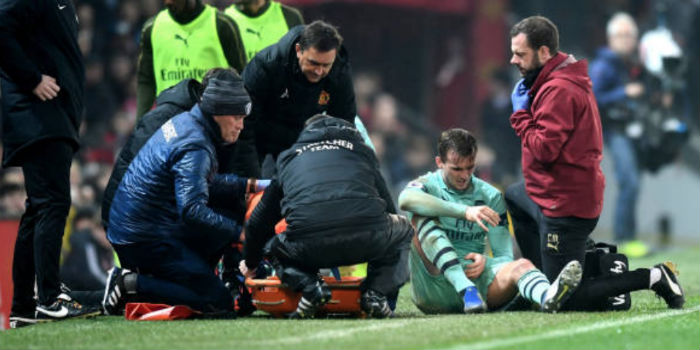 Rob Holding says that even if he’s just on the bench for tonight’s encounter with Man Utd, it will go some way to providing closure after his 10 month spell out with injury.

In December 2018, the defender ruptured his ACL at Old Trafford and missed the rest of last season. He returned to full training during the summer, and made his comeback in the 5-0 win over Nottingham Forest in the Carabao Cup last week.

However, going back to the scene of the injury, and potentially making his first Premier League appearance, is something he’s looking at in a positive light.

“It will be coming full circle,” he told Sky Sports.

“Even if I am on the bench it will be brilliant to just walk back to that spot that it happened and just sort of take it in and have a bit of a moment.

“Then it will be business as usual. But I couldn’t really write it any better. I suppose you could say it is a bit of closure for it to happen there and then your first game involved is back there.

“It will be interesting, but I look forward to it.”

The Gunners face their old rivals in a game which means a lot less than it used to in the past, but a first win in Manchester since 2006 would open up a 6 point gap and move Unai Emery’s side back into the top four – level on points with Leicester.

Come on Arsenal!
Holding seems like a nice chappie, hope he gets on, knocks a few heads and helps the team to a famous victory.

Holding is turning into a cult hero. Nothing would please me more than to see him involved tonight as we tuck United in at home. As a side note, this a huge game for Emery this evening. If he cant get a result against what is quite literally the worst Man United side I have ever seen in my life time, under the stewardship of their worst ever manager. Then serious questions have to be raised about his future at the club, when the likes of Allegri are floating around without a job right now. Even candidates like Brendan Rodgers… Read more »

Would love it, just love it if Holding comes on as a sub & scores the winning goal ?

It would be an even sweeter as closure if Arsenal can win the game! COYG!

A boring 0-1 to the Arsenal will be just fine.

hah, You do know that’s very unlikely to happen right?

The Only Olivier is Giroud
Reply to  Scourge of Goooner

Actually considering Emery’s conservative approach to away games (and our struggles at OT which pre-dates him by a decade) and the state United are in I wouldn’t be against betting a few quid on a scrappy one goal affair.

Any score will do as long as Arsenal win!

Would love to see Holding starts or just even play some part of it. Would also love to see either him or Chambers score the winning header

PS : Please control yourself Luiz and don’t give away any penalty. TYVM

Bellerin had an assist for the U23s this weekend. Wouldn’t it be a tad much to ask him to play again today, don’t you think?

This might the future starting 11. But some players are still not ready at the moment. It’s too big a gamble to throw them in at this point. Let Bellerin and co work their way at their pace

May the team invoke the the spirits of Wiltooooord and, to a lesser extent, Emmanuel Adebayor by grabbing a first win at Old Trafford after what seems like a century

COYG,We have to beat man United by Unleashing Chambers,Rob Holding,Luiz,Tierney then Bench One Of your two Sons Xhaka or Guendouzi, Unleash Toreirra,Ceballos,Bellerin should start from bench because he played 90mins On Saturday….Luiz partner Sokratis won’t work ooo

Hope he starts but assuming he doesn’t.

Rob was talking the other night about how Xhaka fulfils the leaders role in the dressing room and being quick to dish out fines. Let’s hope he’s dished himself out the maximum fines apart from Sokratis and Luiz till now because they’ve all been abysmal on the pitch where it matters. Checking your phone during training is not nearly as bad as pulling down Heung min-Son in the box stupidly in the NLD at the Emirates

Pulling down? It was a borderline assault

Not only a good player but a mature and intelligent man. Hope he stays injury free because he will be an asset to the team both on and off the pitch.

After Watford, I’ve no idea what to expect.

I don’t wanna be negative ? but this is what will happen:
We will lose this game due to defensive shambles and we will make Greenwood and a bunch of other players into world stars just like what we did to Rashford a few seasons ago. United will go unbeaten for a long time and we will be fighting for 8th around Christmas.
I hope I am wrong.

I bet you are fun at a dinner party.

Are you a ManU fan btw?

You should look at it as positive since you are a MaNu fan. Be prepared to be disappointed..

At the very least Rob, you won’t be wearing that hideous green shirt!