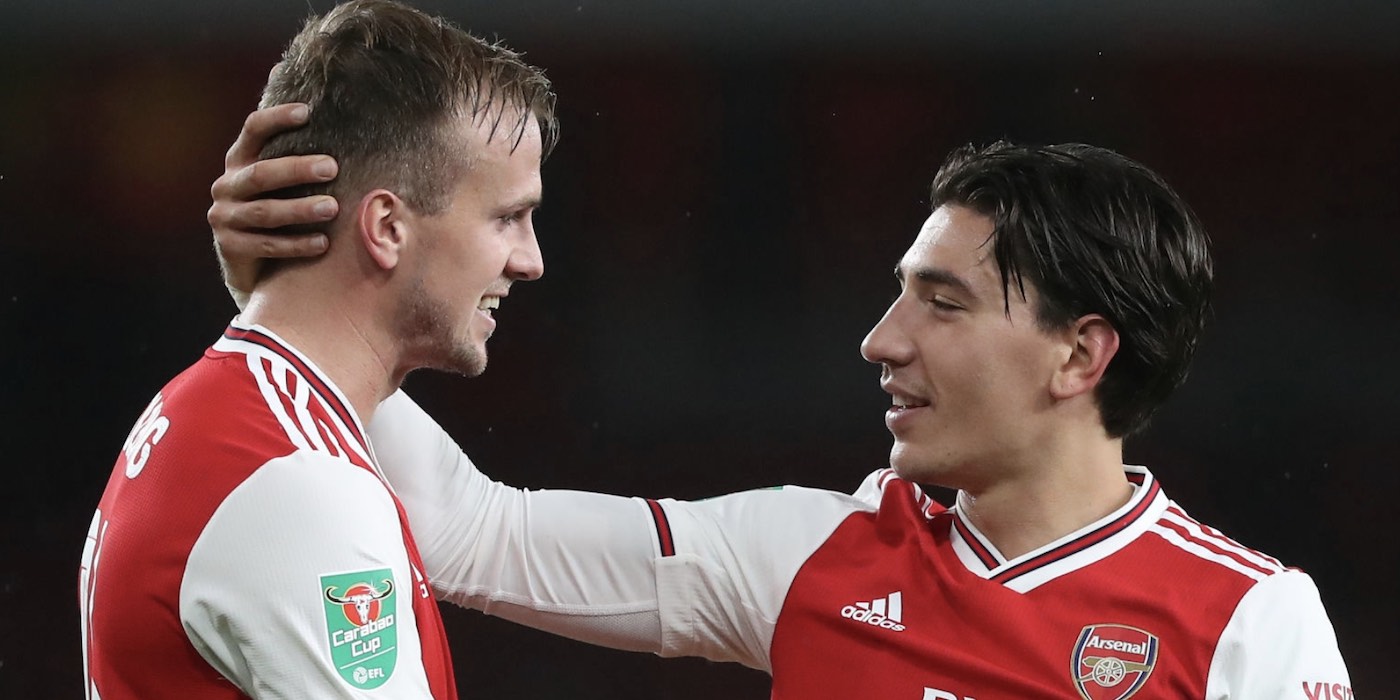 The trio all featured against Nottingham Forest on Tuesday and could be in contention to feature in some capacity against Manchester United on Monday.

Unai Emery has already suggested that Hector Bellerin might be better served playing for the under-23s as part of a gradual reintegration, however, it wouldn’t be surprising if Holding and Tierney make the bench at Old Trafford.

Having suffered a head injury that forced him off in the first half on Tuesday, the club have confirmed that Emile Smith Rowe is still being assessed. They state he will follow a graded return back into full training, presumably in line with the Premier League’s concussion protocol.

The only other player still sidelined is Alex Lacazette, who should return from his ankle injury next month.

United are there for the taking, a point would be a good result, but all 3 are up for grabs, and I hope we go straight for the throat.
Saka for me has done enough for another start, going a goal behind might not be a bad thing…. we seem to play a lot better on the front foot, and with the hand-break off.

The Laca injuries is a nice change for the Arsenal

I wouldn’t consider it a nice change for the ManU game. Lacca’s our best ‘big game player’ after Rambo departed. Would prefer to see him leading the line against ManU. As much as I love Auba, and as good as he has been for us, he doesn’t produce for us in the biggest games in the same way that Lacca has.

I sincerely hope that I’m left eating my words on Monday.

I see what you tried to do there.. But the laca chill among some sensitive souls killed it.

This all seems to convenient. Cue the injury gods to strike again… hopefully they will spare Auba!

Would’ve fuckin loved for Laca to have played at OT.

I wouldn’t mind a Tierney start to curb the runs of Wan Bisaka. He looked ready to me.

Massive game coming up on Monday. And a very interesting one too.

This is the worst United side since Ferguson decided to hang up his stopwatch. They are there for the taking. I’m certain we’ll score at least two goals, but as we can’t defend for toffee we’re bound to concede a few too. Should be a good game. If we struggle to beat utter rubbish like Watford away it probably be worse at Old Trafford.

True, caveat being I’d say we are on better form now with a lift from the last 2 wins will be very interesting.

Pogba back Greenwood back Martial likely back Shaw doubtful, Rashford, Gomes, Dalot, Bailly all out While I agree it’s a pretty rough looking United team, this is EXACTLY the type of game we have struggled with over the years. A game we need to make a statement and we come up short. We need a result here. I’d love to see: Leno Tierny-Holding-Luiz-Chambers Torreira-Willock-Guendouzi(Ceballos) Saka-Auba-Pepa(e) I could take ceballos in there for Willock or Guendouzi, but want no part of Xhaka in the midfield of this game. They’ll try and break at every chance and we need to be setup… Read more »

Pogba is struggling with ankle injury according to the latest update. It might be a mind game from Ole. Nonetheless, it all depends on how we set up. United are there for the taking if we want to do it. Can Emery select the right players from the onset? I doubt.

Pogba is their version of Ozil: a talented player who can’t be bothered to put in the effort and has the ego the size of Neptune. And he wants out. The rest of that squad is rather underwhelming. Rashford is the only player that excites me.

That said, this is their worst side since Ferguson left. I hope our boys put them to the sword. It’s high time we create distance between them and us.

I remember the last time we played man Utd when they had a huge injury crisis, a youth player came on called Rashford and ripped us apart. We never make it easy, expect a close very close match.

I would love to see Martinelli from the start on the left. We need to keep Wan Bisaka pinned, and a winger/Centre-striker like Martí is the guy to do that. Saka couldn’t do that; fade into centre-forward to allow Auba drift left and make those blind runs into the box that are difficult for centre halves to contend with. I hope Pepe makes his mark in this game. He had his chance to in the game against Liverpool but squandered those. Hopefully, United are too ashamed to sit back at home and afford us the space our (sort of) strikers… Read more »

That news is music to my ears. Couple of weeks From now we will be talking about the full squad ready, and Emery scratching his Head, when every player is giving him the dog eyes. Bellerin, Tierney, Laca, Holding, + The current crop.

I am getting goosebumps just thinking about it.

There will always be current injuries. When Bellerin and Lacazette are match fit again, others will be injured. But for the first time in a long time, it seems we currently have decent options in every position.

It seems the players voted for it

Oct … 2017, 2 years ago … that’s a lifetime in this league. We have had some good Europa league away results tho? Puzzling … guess EPL away tougher than EL, except in Baku-fuck-knuckle loss to an EPL arch-rival.

Probably the most important aspect of any successful season for us is keeping our injuries to a minimum – nothing long term – nothing season-ending. It enables us to (a) rotate (b) work out our best 11 (c) not have to rely on weaker players for critical matches. It also means we can hold off bringing back players too early. It’s why clubs like Man City and Liverpool have been doing so well and why Chelsea and Man United have been doing so badly. And it’s why a relatively injury-free Leicester managed an improbable title run. This season we’ve been… Read more »

Bring on the downvotes.. but I know deep inside all of you would agree!

Great chance to repay the fuckin 8-2

8-2 to the Arsenal anybody? … that would be certain to put Ole in the firing line (just a thought)