Liverpool 5-5 Arsenal: By the numbers

The result didn’t go Arsenal’s way in the end but it was a fun match. I find it really hard to get upset about losing in the League Cup. It is by far the least important competition that Arsenal play in and one that I don’t take very seriously before the final.

What I want to see is that young players get a chance to play and that the matches are entertaining. This checked all of the boxes expect for coming away with a win. There will be plenty of time to worry about the results to come without dwelling too long on this one.

Liverpool 5-5 Arsenal: By the graphs 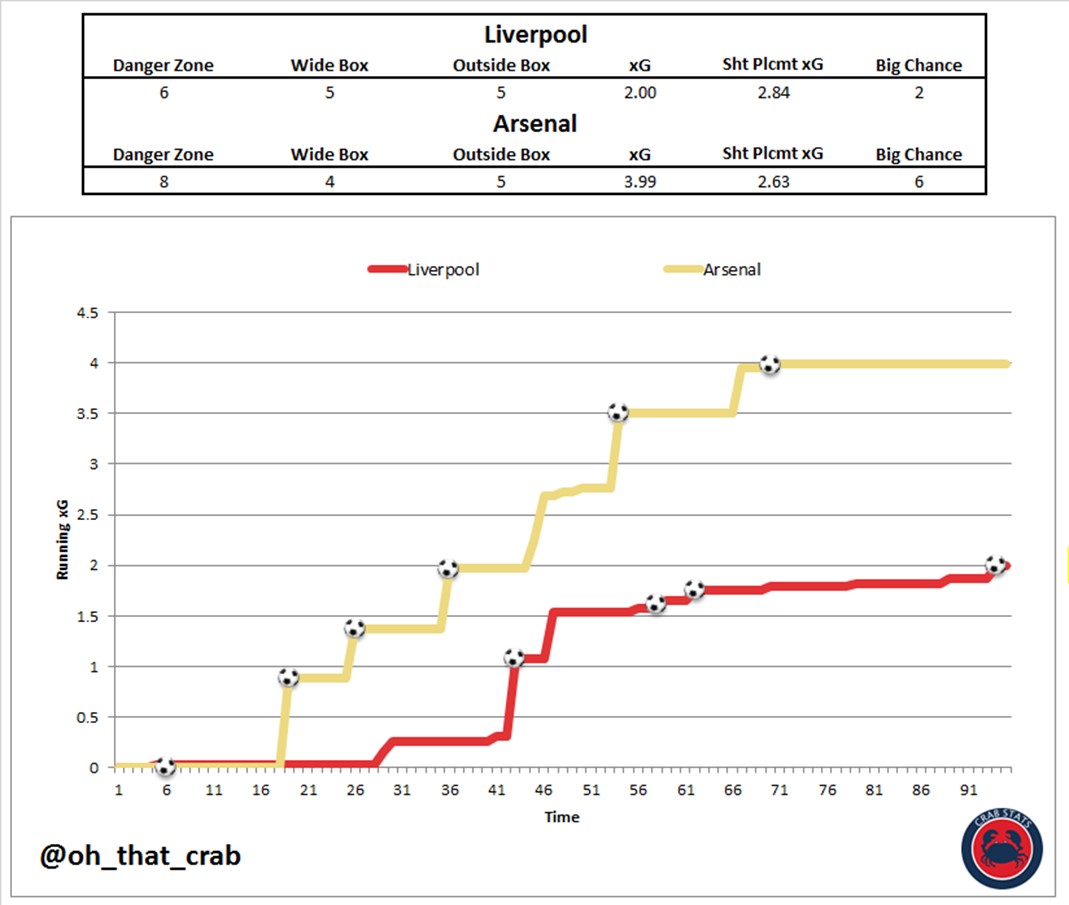 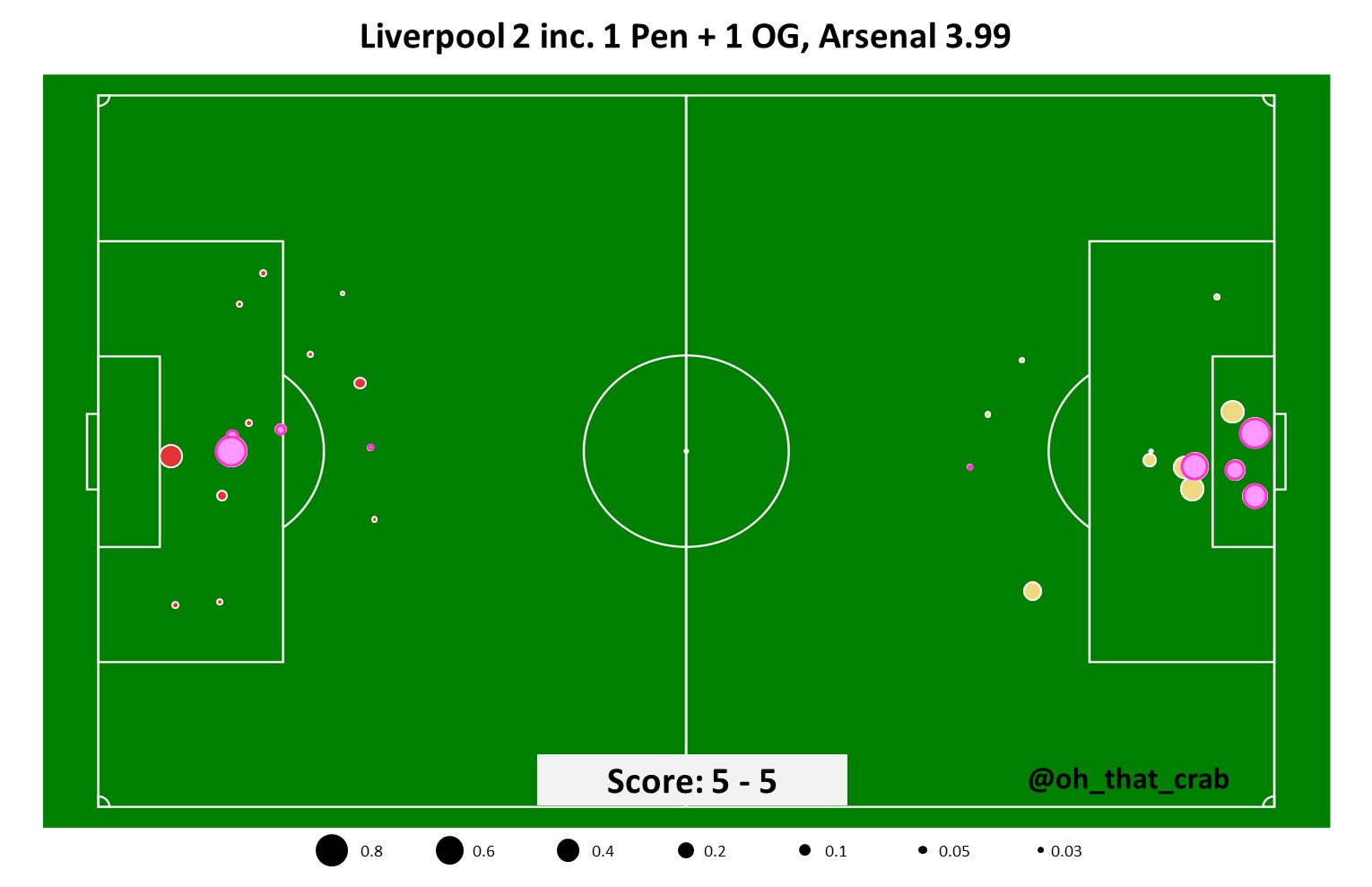 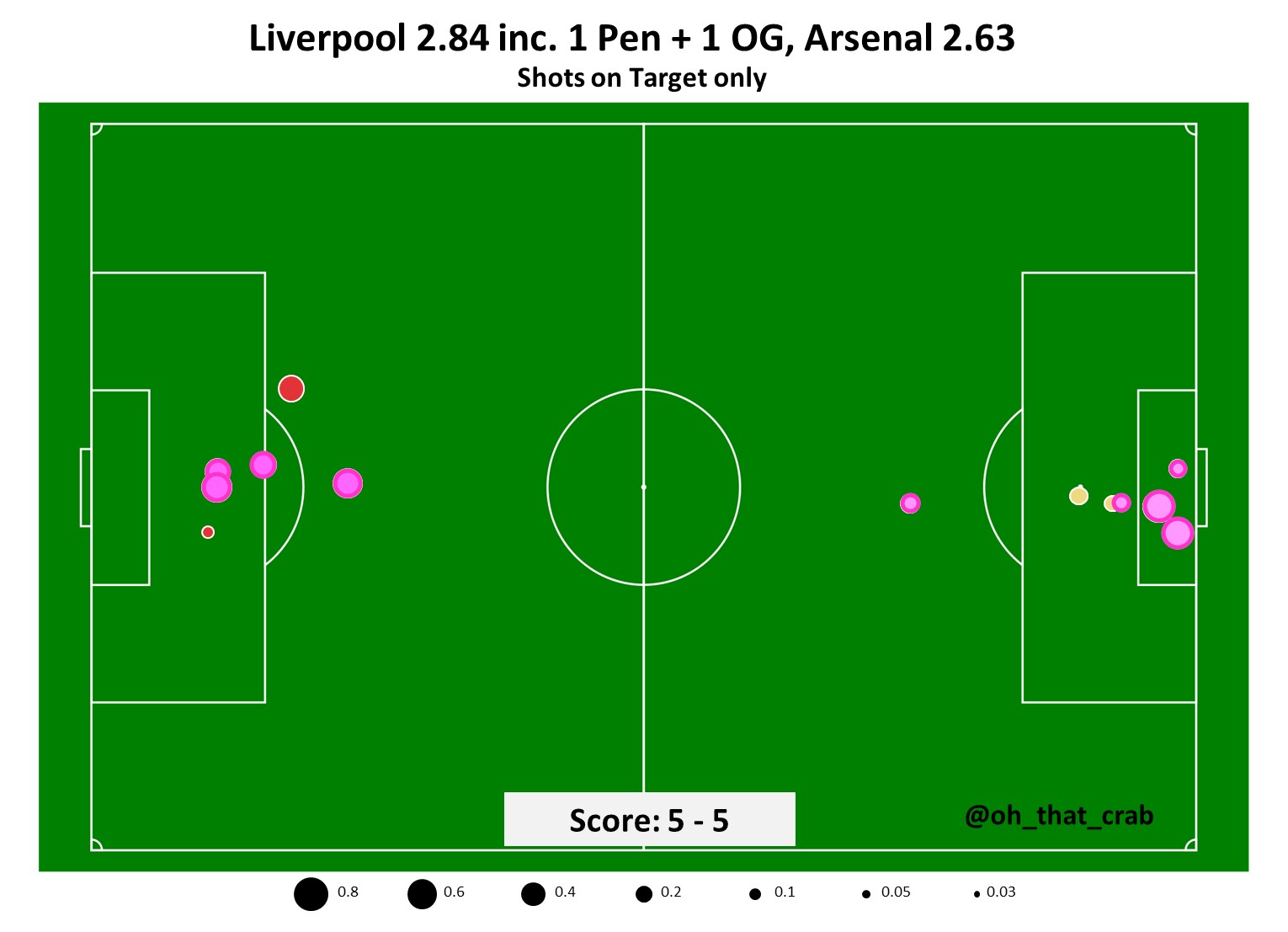 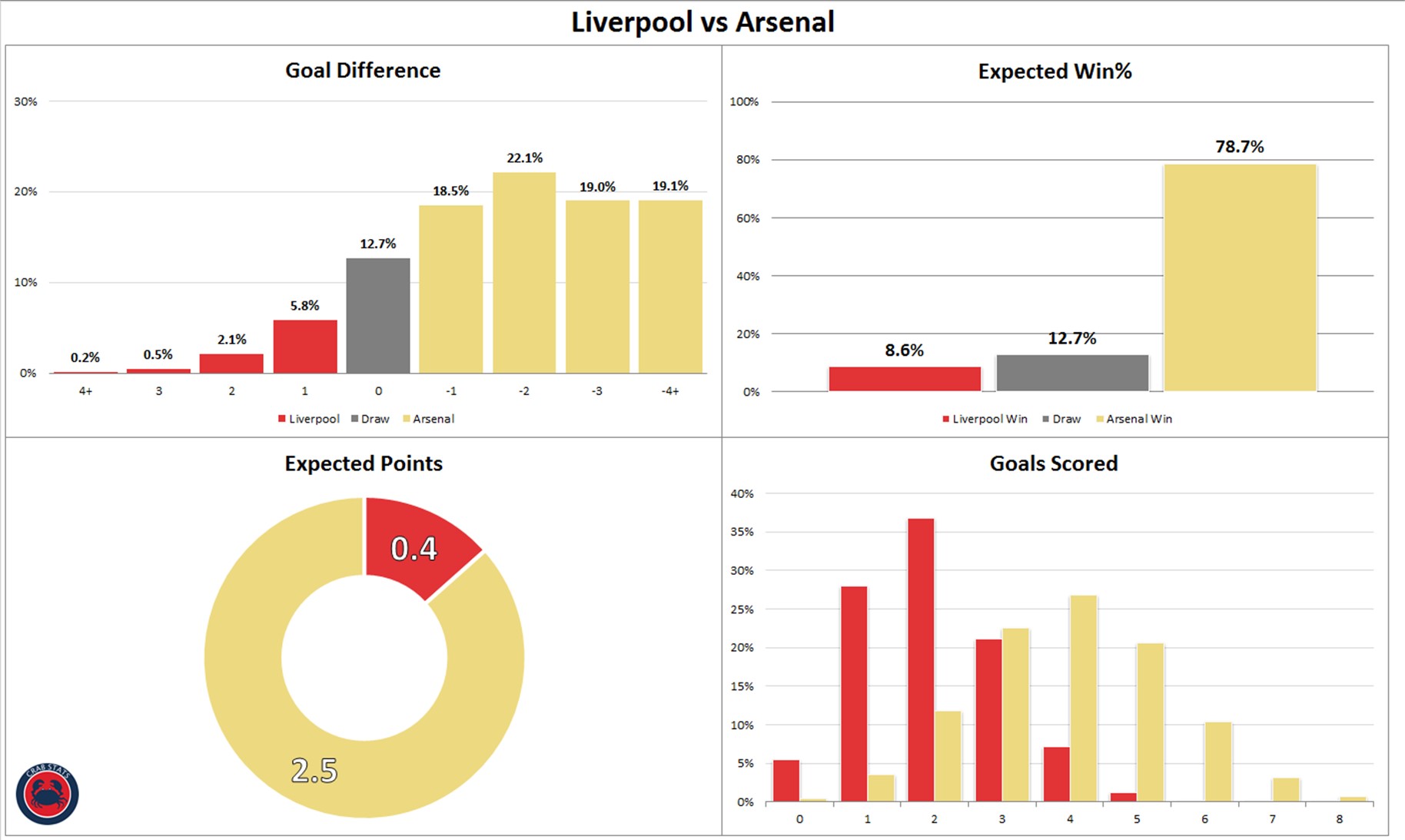 Liverpool 5-5 Arsenal: By the numbers

3.99 – Arsenal’s xG in this match, the highest mark that the Arsenal have produced (League and Europa League only) since November 29, 2017 Arsenal created 4.2 xG against Huddersfield in a 5-0 win.

4 – Passes into the box completed by Ainsley Maitland-Niles and Mesut Özil, tied for most among all players.

2 – Shots in the danger zone taken from feet for Liverpool in this match.

14 – Interceptions for Arsenal, led by Ainsley Maitland-Niles with 4.

This is an interesting match statistically. Arsenal had one of their best attacking performances of the Unai Emery era. Arsenal did well to keep Liverpool mostly away from their final third and funneled into the wide areas, and when they had their turn to attack, they were direct and created many dangerous chances. In most matches with these shot distributions Arsenal should come away with victorious more often that not. In the end Liverpool finished well and came away with a win on penalty kicks.

Gabriel Martinelli is easy to love

It is so easy to watch Martinelli and find your self appreciating everything that he does for Arsenal. His ability to find space to get shots is truly impressive for a player his age, adding on his ability to find himself in really good scoring opportunities and he looks like he is something very special. In this match he was Arsenal’s most dangerous player and was a constant pain in the side of Liverpool. The more I watch him play, the more that I am impressed with him.

4 – Shots, tied for most on Arsenal

Torreira has been on the fringe of Arsenal’s midfield this season but this performance (in combination with the other issues facing the club) has given himself a strong case to get more playing time. Emery has pushed him further up the field from defensive midfield and it has unlocked attacking talent that I didn’t realize that he had. In this match, he looked to be everywhere and was truly a box to box midfielder.

I want Emery out as much as most Arsenal fans I know, but I think we have to at least be patient with his idea to push Torreira forward. Wenger put players out of their preferred position all the time with some legendary results (and some bad ones tbf)

When I suggested that I would love us to buy Thomas Partey from Athletico Madrid it sounded out of place but I believe that is what this team needs in DM, I enjoyed my team yesterday in that they always attacked with purpose not the Emery style and the willock torreira partnership was a better combination in midfield than any other so far this season. Ozil started slowly but still showed a glimpse of what we’re missing. Overall good performance but still #Emeryout

I have no more patience with him.
But I see method in the madness with Torreira which I think everyone would if they tried to. But in trying to fix on issue Emery is ignoring others and again playing players out of their preferred position.

Or playing the in their correct but setting them up to fail with other changes.

I think people are furious because someone mobile is needed further back and Torreira is the very obvious choice but doesn’t get a sniff.

I think this is an idea that he is copying from previous managers. Sarri moved Kante further forward in an attempt to win the ball back earlier and further up the pitch than normal and use Jorginiho as his deep lying playmaker. Think he did the same with Hamsik but Hamsik is naturally more creative but combatative still. Arsene tried it with Le Coq playing higher than normal. Torreia is naturally combatitive i think is more a B2B than a dm. i think him and bentacur (cant spell these guys names) is a good pairing for national team and was… Read more »

LT isn’t a new player. Emery had all last season to figure out what kind of player he had and how he wanted to use him. All of sudden he’s CAM? We have to wait it out? If this fails we wait out another player experiment ?

What a lot of people don’t know is that Torreira started his career as an attacking midfielder and only changed to a DM at Samp.

There is a reason why he was switched

I like Torreira but he should never be starting at cam. Box to box sure but he lacks the creativity and dribbling ability to play that high. We need someone who can be an outlet and play through the defense quickly. Hopefully he starts at the weekend

Thanks for your work love the numbers. Torreira to me has attributes that could help this team playing higher up. I got so many thumbs down for understanding what Emery is trying to do that I took it personally and cupped my ears in disregard of booboys as I logged off and told everyone around to feck off. My kids where very bemused to say the least. I dont even think the idea is Emerys as Torreira has a history of playing in the 10 position before he became a CM. I think DM is a big ask in PL… Read more »

Emery is trying to emulate what Sarri did with Kante but we have better players that can do that no.8 role like Willock, Ceballos and Guendouzi. Maybe Ozil could even make that switch like David Silva and Iniesta. And on the other hand Torreira is probably our best no.6. What he’s doing isn’t totally crazy but it does feel unnecessary.

I still think we should give Chambers a run-out some match as a proper DM — the job he did for Fulham last year won him considerable praise, and he’s got the physicality to impose himself a bit better than Torreira.

Arsenal.
The only club that can score five and still lose.
Terrible team…

That wasn’t fun and you’re wrong about Torreira. He was terrible at trying to cover as a box-to-box and was very much responsible for a complete lack of shape and gaping chasms of space in the midfield.

This isn’t his flaw, Emery is trying something which this guy can never be!! I would still prefer him alongside Guendouzi instead of Xhaka.

Martinelli is just about the only part of AFC that brings me joy these days.

We gave away more than a few cheap goals, but it was great to see a strong attacking performance for a change. For me the performances are more important than the results, which is why I think Emery should go, PL performances have been poor the whole time (excluding a handful of games)

I am not overly upset by going out of this cup, although is hard to not be a little disappointed when you scire 5 and not win the game. I guess Arsenal did what Arsenal does best! Find a way to Not win a football match.

Can we see the stats on Emery to make it easier for the case to sack him.

Martinez should have at least saved one of those shots.

Holding is not the answer to our defensive woes, he looked like an english mustafi/sokratis ie no upgrade on what we have We lucky Saliba will arrive in the summer hopefully will not be corrupted by this shit manager Ozil is too good to leave out, that assist for niles could only be pulled off by a handful of players in the world- definately not by any of our current midfield players, if you want him to run around look busy, press the shit out the other team and anything else then he wont create the situations that only he… Read more »

How many 19 yo cb make an impact in the PL? Especially CB from a different league. If he is any good it will probably take 2-3 years before he makes an impact as a starter.