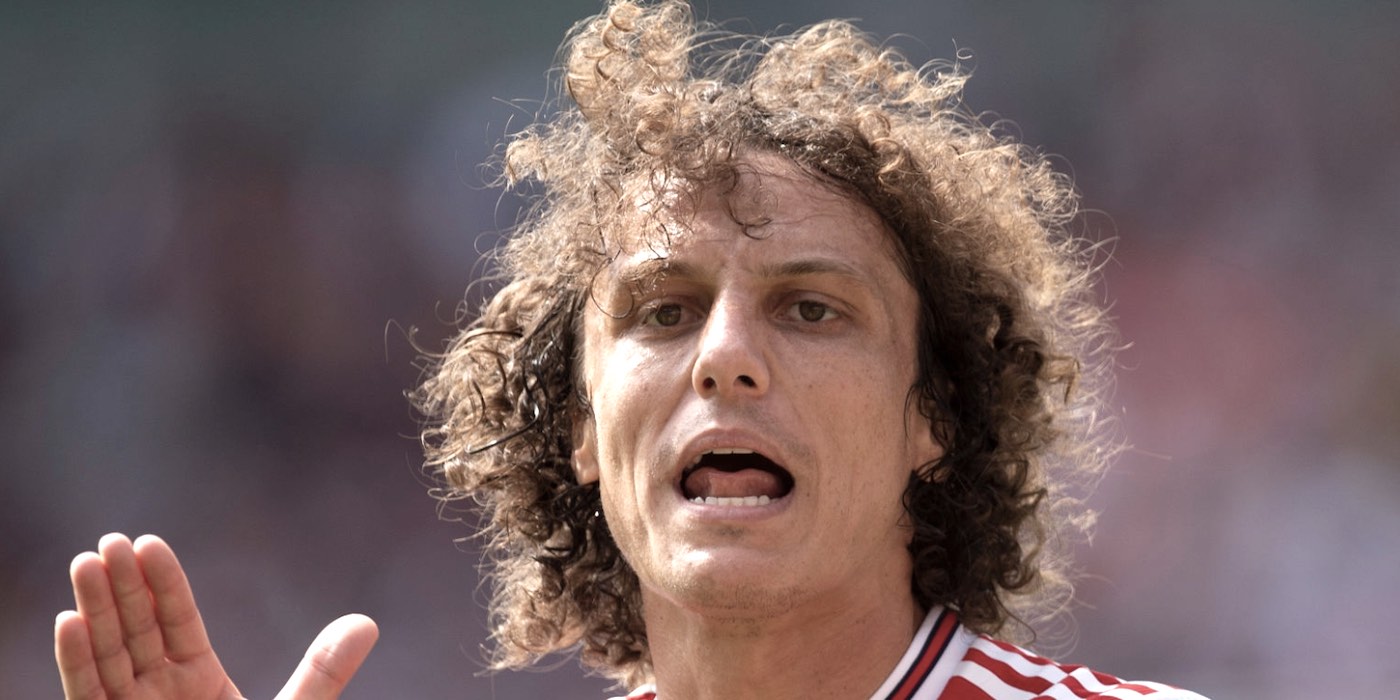 David Luiz says it’s important the players keep their heads after Monday night’s 1-0 defeat to Sheffield United, and that they need to keep believing in Unai Emery’s philosophy.

Quite what that philosophy is is anyone’s guess, but maybe they have greater insight into it on the training ground than we do by just watching Arsenal’s performances.

The Gunners take on Crystal Palace tomorrow at the Emirates in a game which demands a response to the dismal display at Bramall Lane, and the Brazilian has emphasised the importance of taking three points.

“We have to be honest about what went wrong, but we also have to be calm,” he told Sky Sports about the last Premier League defeat.

“It’s only our second defeat this season. We are doing many things well.

“It’ll be tough against Crystal Palace but we want the three points. I want to win titles with Arsenal, that’s why I’m here.”

Guys, this is all getting too toxic regarding the manager. Klopp finished 8th in 2015-16 and 4th the following 2 seasons. I get where you are all coming from, I actually up voted a couple of Emery out comments in the aftermath of Monday night, but feel really guilty about that now. He needs more time, at least until the end of this season to get champions league and perhaps even to the end of next season if we can financially afford to wait that long. Thursday I don’t mind at all, Willock and AMN have had a very valuable… Read more »

We need defenders and get rid of ozil paying too much wage bill.

Liverpool fans were patient with Klopp because they can see what he’s trying to do. I don’t know what Emery’s plan is, hence the frustration. This is the reason for the backlash I guess.

Liverpool also spent millions on goalkeeper, best defender in world, they raided Southampton for talent. They have a solid English core in their team. Klopp actually plays with tactics and plans games. He demands excellence from his team. He has salah, and the list goes on……..we can’t compare our manager, owners, or list of players with Liverpool.

I’m currently watching Lampard’s Chelsea winning four nil against Burnley. Please forgive me if I don’t feel the same way as you.

The sad reality is that you can’t see Emery’s Arsenal do that away to any team in the Epl.
Two away matches against Watford and Shefield U has yielded a solitary point.
That tells you all I am afraid.
EMERY OUT!!!

Jack but
Reply to  Man Manny

For the second time David Louis claims he wants to win title with Arsenal, should we tell him?

You’re wasting your time trying to appease the toxic supporters we seem to have.

Well said. Some people have their heads up their arse.

It was never as if Ozil was winning us games, if anything I seem to recall his off the ball work is particularly poor which affects the press by the rest of the team and allow for gaps to open.

Some people completely deluded wanking off to their own fantasies.

So what went wrong at SU and what is the philosophy???

someone
Reply to  Martin Elliott

There is no need to fixate on Emery’s lack of footballing philosophy as a flaw when he cant even coach the most basics of football , Arsenal has downgraded in every area of the pitch and sacking Emery as soon as possible is the best option.

I disagree with you on your statement that UE does not have a philosophy. The early days of last season was exciting because of the high press tactical philosophy which faded away. Now you may ask questions like why? The answers to which even I don’t have. It’s quite perplexing to be honest. Only 1 thing I can think of is the manager has lost faith in himself and his philosophy.

Hahaha! This is even worse.

Good to see that Luiz seems to become a key figure in the team.

Not so good to hear what he says, though. Either he’s very good at pretending, or…

The number of interviews with Luiz is incredible! He is par with UE! lol

To me every time he speaks, he sounds positive and assuring but at same time he tends to sounds like he’s licking Emery’s àss, because clearly none of us know what philosophy it is Emery has instilled upon em. Even past legends keep on questioning that philosophy

That s why i miss Wenger. He wanted To win but he also wanted to give people something good to watch. A lot of us are just a bunch of proletarian who put so much money and time into this. Football can be a fantastic and magnificient show. And giving the people something to appreciate and entertain should be the only philosophy. Those millionaires need to remember that if they have this life its because of us. I m just a delusional anticapitalist but in Wenger i thought there was some kind of “leftist” with that emphasis on giving the… Read more »

I agree in most of what you’re saying, however I don’t think there’s ever been a “leftist” approach to the game, not even political. Football is business, and the product of the business is entertainment and entertaining teams makes the most money because they attract the most fans. However to keep a position where we can attract the best player (who offer attractive football) we need results and we’ll need to get back to CL (which the best players want to be in, and where the real money lies). Arsenal is in a transition, with a change of generation, which… Read more »

It Is What It Is
Reply to  anonarse

Watched the first 15mins of ‘Take the Ball, Pass the Ball’ (Barca 09-13 Beast Mode documentary), and I am now certain Emery will not last. If he does, he’s going to have to have a re-alignment of philosophy. Arsenal have (had) a culture, style of play, and values developed over the last 22 years that the world has come to love. We’ve all heard fans and pundits alike, at various points over those 22 years say they would pay to watch Arsenal. It’s sleek, beautiful and fluid due to emphasis on creative expression and in my opinion, a considerable number… Read more »

Sheesh. Sorry to eat into your weekend guys.

And females, of course.

DB10s Air Miles
Reply to  It Is What It Is

Girls aren’t allowed on the internet……..

anonarse
Reply to  It Is What It Is

We can perhaps call it the DNA of Arsenal, but in reality wasn’t it the philosophy and the values of Wenger we all became in love with? In a way Emery had to change some of the legacy of le prof, to be able to form his vision (a vision I can’t seem to identify). One of the problem with having Wenger for such period of time (same goes for Sir Alex Ferguson) is that he was given almost ultimate power and could freely create his values which later has become identical with what most of us think of as… Read more »

We’ve been in transition as long as Caitlyn Jenner

But nowhere near as long as manure……. manure in perma-rebuild.

The Kolkata Gooner
Reply to  Karmafrench

It’s appropriate for senior players like Luiz and Xhaka to give interviews. The first step to fixing a problem is admitting that there is one (yes i got that from ‘the newsroom’).
That being said it’s time for these players to really step up and show what they’re made of! Tierney for Crystal Palace, please. Perhaps even Ozil? Come on ya Gunners!!!!!!!!

actually scratch that, I’m a bit sick of all talk and no conviction on the pitch. But Sundays a new game so let’s goooooo

Honestly the chit chat when coming back from the international break was the usual ”page turned, we are third…massive opportunity”…etc etc then BOTTLED IT…AGAIN. It happens every time we start to get on a roll we start talking in the press.

dude, Tierney was cramping against Vitoria. No way is he match fit for a full PL game. That said, he does deserve to and should be fit to come on as a sub.

Thanks David, but wouldn’t it actually be in our best interest to have the team set up to win games? After watching these away ties and losses, it sure looks as though we are playing for ties and if we nick a win it really isn’t that expected. I just can’t get Emery’s record at Sevilla out of my mind. You actually have to set up not to win to go a whole reason without an away victory. What is the statistical probably of not getting lucky at least in one game?

It’s good for Luiz to let us know, for I surely cannot tell that from previous matches!

Johnny 4 Hats
Reply to  A P

Watching Leicester and Chelsea frustrates me alot… These are teams that have spent less money than arsenal in the last two years and just appointed new coaches in less than 10 months……I’m not trying to twist words here but Arsenal under Emery is destined for commotion…no jokes!

Chelski were lucky in not being able to spend this year and having to use players keen to show themselves. I wonder how Lampard would handle having to buy big to satisfy fans.

Remember when we all said Brendan Rodgers wasn’t good enough for Arsenal.

The way we’ve been playing, those two losses are very generous. I hope they realise that and acknowledge that things, the same things, are going wrong more often than not. Our for and against is shocking and it’s not sustainable.

There will be a half dozen more Sheffield Utds if they don’t get it together and fast.

Too many deluded gunners always give the impression the club is populated by fools for fans. Same people who wanted Wenger out said specifically they were willing to give the new gaffer 3 seasons. Same people now want him gone even if we are still early in season and in fifth. Some idiots preferred Ole. Mental much? Others think they know better and now want Ozil back in. AGAIN last I checked, he wasn’t exactly doing the business for us. His off ball work is particularly poor and as we have seen from recent games, is that what you really… Read more »

Get off from your high horse and shut the fuck up! Everyone is entitled to their opinions and just because they don’t agree with yours does not make them “deluded” or “idiots”. Who the fuck are you?

Arsenal will not enter top four again. Young players need improve a lot. They might need to get some more years for title.