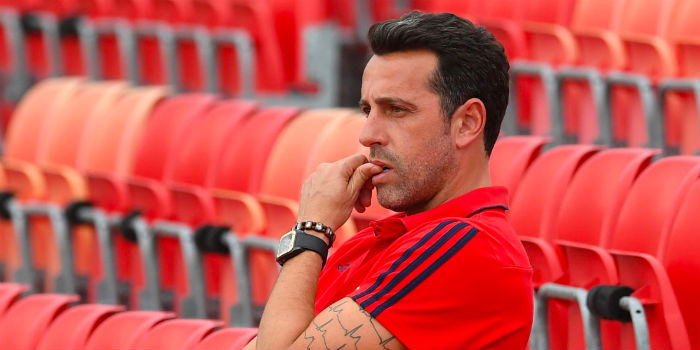 According to Amy Lawrence, Arsenal’s decision to part company with Steve Morrow is part of a process to further streamline youth development at the club’s Academy.

Writing in The Athletic (£), it’s revealed that new technical director Edu is leading the restructure in conjunction with Academy Manager Per Mertesacker and that the duo deemed Morrow’s position as Head of Youth Scouting to be expendable.

The former Northern Ireland international, who famously scored the winning goal for the Gunners in the 1993 League Cup final, was an unsuccessful candidate for Edu’s position.

The Daily Mail’s Sami Mokbel claims that Morrow will land on his feet with the FA apparently impressed by his work and eager to offer him a position.

Morrow isn’t the only casualty. While it was previously reported that seven other scouts have also lost their job, Amy writes that the number is five.

It remains to be seen whether there’s any truth to a rumour doing the rounds that Manchester City’s Joe Shields – the man credited with recruiting Jadon Sancho – is wanted at Hale End.

Mertesacker took over the reins at Hale End in July 2018 and has been working with Edu for just under four months.

Back in September, the German told Arseblog News: “I needed to get our house in order first. And get to know the ones [players and staff] inside.

“Edu now coming in is another challenge. How does it fit? How does he fit in? At the moment there are many, many challenges I have to tackle internally so that I’m in a position in one or two years to look for input from other countries, academies, sports to take things to another level.”

Earlier in the summer, the club made a big song and dance about its dedication to producing homegrown talents as it confirmed Freddie Ljungberg and Steve Bould would swap places.

“Identifying, recruiting and developing young players is a key part of our strategy,” said Head of Football Raul Sanllehi.

“We have some great talent coming through our younger age groups and, like all top clubs, the challenge is to help them make the most of their abilities.”

Arsenal’s squad to face Vitoria this afternoon includes four English youngsters to pass through the Academy plus Hector Bellerin and Emi Martinez who both played for our youth teams.

Curious to understand what made this decision actually streamline the processes. Is it just a case of too many people doing the same job? Does his role get absorbed by Mert or is there likely to be an internal promotion to drop the employee numbers? As a business minded individual I’m very intrigued by these reshuffles. Interesting to see Edu behind it, and curious to see what else is to remain. Also very curious by what Mert said about sorting out the staff before being “in a position in one or two years to look for input from other countries,… Read more »

no idea why downvotes (fat thumbs/ people hate thinking). Maybe half a dozen people don’t like Per?? It is a tricky situation for Per with his own managers changing, but actually the ‘releasing’ (is it sacking or removing of the role?) of Morrow is a vote of confidence in Per. Never was sure about his “in a few years I’ll be able to look at other leagues/ sports” and thought a teeny bit of pressure would be likely (‘erm… do it in 6 months’) ;¬) But still, these things need working out and if Edu is long term, then hopefully… Read more »

Anyone else saw the reports linking Wenger to the Bayern Munich job? If yes, I really hopes he does well and win the CL 🙂

Hopefully his first game is in CL against Spurs and he wipes them off the Earth.

that will make Bayern my second team then 🙂

Maybe Sp*s will finally accept defeat and return to Mordor.

Why would they play Stoke if they lose?

I was thinking it would be really good if we could click on comments from the Android App, as opposed to having to open in the browser first.

Second point, could there be a previous and next at the bottom of the Android app pages for each post.

Pleaseee at least consider, I understand it may be more complicated than I think, but it’s just something that’s been on my mind.

Also while on the app note, night/dark mode. Please. I prefer the older app for that one reason.

Would also love this in the iOS app too if possible

In my experience, if an organisation wants you and what you bring to the group, they move you around rather than letting you go.

Telling my boss I had a plan to take things to another level in 2 years wouldn’t fly either.

Maybe I need a new job ?

Now i am curious that is there a conflict between Edu Gaspar and Mert-the sacker? Or worse our only pearl left, Francis Caggigao. Is he about to get sacked by Edu?

I heard rumours that Edu is trying to land Joe Shields the man who brought Jadon Sancho to City but well, rumours are just rumours…

Why is it an achievment to spot Jadon Sancho? Didnt every club in the country want him and Reiss Nelson as they were tearing it up in South London,

Any truth to the rumour that Tony Adams was hired to carry him out of the premises and Morrow broke his arm in the process?