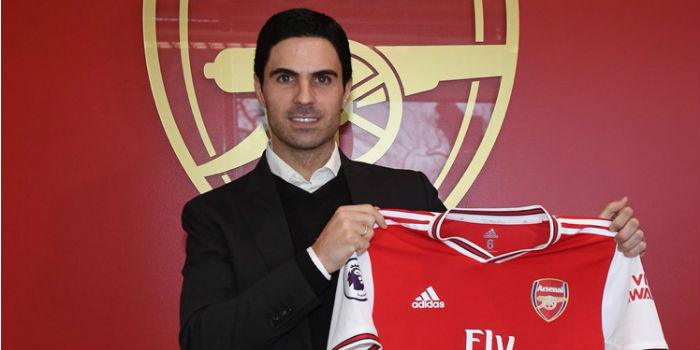 Mikel Arteta say it’s a “huge honour” to be Arsenal’s new head coach after the club confirmed he’ll take over the position on Sunday.

The Spaniard has been learning the ropes under Pep Guardiola for the last three and a half seasons since drawing time on his career after five years as a player at the Emirates.

On his accession to the Gunners throne, the 37-year-old admitted he has a big job on his hands.

“This is a huge honour,” he told Arsenal.com. “Arsenal is one of the biggest clubs in the world.

“We need to be competing for the top trophies in the game and that’s been made very clear to me in my discussions with Stan and Josh Kroenke, and the senior people from the club.

“We all know there is a lot of work to be done to achieve that but I am confident we’ll do it.

“I’m realistic enough to know it won’t happen overnight but the current squad has plenty of talent and there is a great pipeline of young players coming through from the academy.”

He added: My first task will be to get to know the players better and get them playing the kind of fast-flowing, attacking football that Arsenal supporters around the world want to see.”

Arteta is understood to have gone through a rigorous interview process – he did the same in 2018 but was overlooked on that occasion – and is said to have been the standout candidate from a strong field.

We’re very pleased to welcome his impeccable hair back to Arsenal.

Raul: “LOL, desculpa about last time. You up for it?”

Im a recruiter and i’ve never done a rigurous interview by going all the way to my candidate’s house for it.

I wish him all the best, and I hope he proves me wrong, but he is not experienced enough to get us out if this mess. I am sure he will be great with time, but right now this is another backwards step for us. Our senior players have to really step us and get us going again. I also hope we go for a emergency left back in January. With all these games coming up we will definitely be exposed in that position.

I like how said – its not about good you are but how good you become! I’m totally down with that!

Speaking of exposed, put some clothes on Cygan

I hoped they’d make this decision. Even if you have doubts about the club’s decision making processes, Arteta’s someone trusted by Guardiola and whose coaching aspirations were encouraged by Wenger, seemingly beyond his usual interest in his players. To have both think highly of your prospects puts him ahead of most young coaches. We were unlikely to get anyone both experienced and still at the top of their game (look at how long it took Liverpool to get Jurgen Klopp). We’re not able to do anything about it anyway, so let’s just enjoy the idea that he could be Arsenal’s… Read more »

Naked Cygan is stinking up the place with all the negativity.

While wishing Mikel all the best for future success I have to say I’m slightly nervous about this. He’s had a great education under some of the best managers in the game but there’s been too many number 2’s who’ve failed to make it as a manager for me to be totally convinced. However, the doubts have to be put to one side & Mikel should be given every opportunity & support from the club to make this appointment a success!!

to be honest, most managers fail to make it as managers

Fair point, the all ultimately fail ?

Yes. Tactics? He worked with Pep and Arsene.Nuff said. Knowledge of the league and our players? Probably on par with anyone we would hire. Decent communicator? Was our captain and probably lead many a practice/tactics session at ManC. Man management at the highest level when you are the sole decision maker? Well okay, maybe this is where he lacks the experience we supporters would have liked to him have.

He’s already said one thing I like, “attacking”. Good luck and come out swinging.

The positive spin is a modern manager with modern football tactics. I’ve also read that Arteta has a far higher IQ than Pep and he has magnificent hair so that’s good.

I have no expectations, which is weirdly exciting. I like his hair, I liked him as a player and i like his temperament. Best of luck to him.

I can get behind this attitude! 🙂

Anyone that knows about who will be in his back room team?

You don’t need 20+ years of experience when you’re more intelligent and talented than most. Look at Lampard, he only had one season before this as a manager and none as an assistant as far as I’m aware. Yea Chelsea are having a bit of a rough patch but nobody is complaining about him over there. I rather have a super intelligent, hungry coach with little experience than a past-their-sell-by-date manager that’s been around for ages. This is a guy who’s actually going to improve our players massively. The fans and the club just need to support him and help… Read more »

I feel happy about this appointment. Get the attacking football back and the rest will come. Let’s get behind him and for fuck sake stop booing the team at home.

Welcome back to Arsenal, Mikel! Hopefully he’ll be able to turn us back into THE Arsenal. No idea how he’s going fix the multitude of problems we have right now. But I’m fully behind him.

At least as a complete unknown no one will be able to predict his tactics. Wenger fell foul of that towards the end of his tenure with teams knowing how to set up against us.

I previously wrote that I would have felt more comfortable with an top-level experienced manager. But the choice has been made and I am fully behind our new boss. He makes up (I hope) for lack of experience by clearly being intelligent, having worked been a disciple of two great managers in Guardiola and Wenger, having gone through the greatest academy in the world, and having a reputation for being quite ruthless when needed. I doubt things will change immediately But if he can stabilize our performances by the end of this season and receive good support for transfers over… Read more »

I am actually starting to get behind this appointment. Good thing is he worked under Wenger and if he is as smart as he is being projected he would know both the good and bad part of the Wenger’s end years. He should be more in tune with what Fans want from the team. I wish him best of luck!!

Good luck Mikel, we are all rooting for you!

Always liked him and wish him all the best. It might take some time but can’t expect miracles to happen overnight. Let’s support the man and club with some proper (positive) gooner spirit!

I have a photo, for some reason. It’s unsettling.

When i read that ‘fast flowing attaking football..’ i found myself unknowingly smilling. Coyg!

Alright. Not my 1st pick, but will back him for sure. Hopefully he can hold the team together like his hair: tightly focused and winning. Every damn day.

Wenger commented he would be up and in 2 hours early to prepare for matches. When you add that morning hair routine in, that is a dedicated, focused man.

Let’s go Mikel! Everyone Who calls them self a ‘fan’ of the club needs get behind him and the team!

I have no experience. Please employ me for 5m a year next time.

Sure, as soon as you graduate La Masia, spend 11 years in the league, 5 years as a starter with us, retire as our captain, and understudy one of the top 3 coaches in the world.

Here comes the:… “Let’s give Arteta time and patience, he’ll need 2-3 years to get our squad into shape” messages…. When we all know this honeymoon period is unlikely to last, and people will be screaming for his head within then next 10 months, probably much sooner….. Hopefully the board show a bigger set of stones this time in backing the manager, particularly in clearing out players Arteta doesn’t want, and those he doesn’t feel are showing the right level of commitment. It’s a huge job, and I’m not expecting to see a philosophy implemented, because once managers are under… Read more »

I rarely comment on here anymore, as there is a huge divide in our fan base. For example just watch ArsenalFanTv. The last time I commented on here I got nothing but downvoted. My last 2 comments where (in the wenger era) he needs to be sacked and get klopp who is interested in joining us. The second comment was when Unai Emery was appointed, I said he would have a decent start with the team because the fans and players had enough of the wenger era, but he is not the right candidate for the Arsenal job. I guess… Read more »

Arsène and Arteta. The Name has to be with Ar and the success will follow. Gear up for the PL trophy 2021. Sounds silly but you will see.cheers

Welcome back. I hope he becomes one of the best manager in the world.

Hi, does anyone know where you can livestream the press conference at 5 pm?
Tried to find it on the web with no succes.

I am actually starting to get behind this appointment. Good thing is he worked under Wenger and if he is as smart as he is being projected he would know both the good and bad part of the Wenger’s end years. He should be more in tune with what Fans want from the team. I wish him best of luck!!

Get in there my son…. give him time and I recon he will achieve a little of the old arsenal style we may still ship goals but I’m sure we will score a lot to…..

He is a clever guy and won’t suffer no fools…. he will play the press and one touch counter attacks it’s going to be beautiful…. and we actually know what he is saying in interviews bonus…

Come on you gunners

“…playing the kind of fast-flowing, attacking football that Arsenal supporters around the world want to see…”? yeah baby…count me in…

Well, we may not win anything (hopefully only for a while), but at least we’ll have the hottest coach in the Premiership

As l welcome Arteta to the coaching bench at Arsenal, l am proud of his first pronouncement that he wishes to return Arsenal to the first flowing football that we are accustomed to.It might come now or later but it is a welcome promise to me.

Read this wonderful article about our new boss
https://www.bbc.com/sport/football/50827317

Our pre season has officially started

Gosh, listening to press conference. Ancelotti was my first chouxe but i have to say Arteta’sanswers impressed me. Tgere is a lot of substance in him. I am feeling positive again, finally. Come on!

Also a rather ‘huge’ gamble. Problem was Llungberg was barely afloat otherwise they would have seeked perhaps another solution in January. As is, they will see how Arteta gets on and if not replace him in the summer. He has the next four matches where we need to put up some points. Bournemouth is not too early, we need a response and if Everton are anything to go by, we should stop making excuses. then its them next which again we should aim to win. Chelsea and United also we need to take points. Leicester, Wolves and Sheffield have far… Read more »