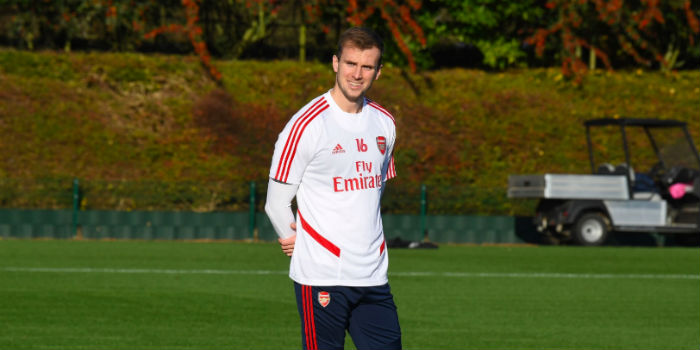 Rob Holding is nursing a bruised knee and is a doubt for Monday’s game with West Ham United.

The centre-back returned from his ACL injurt in the September win over Nottingham Forest but hasn’t featured since the 2-0 defeat at Leicester on 9 November, his only Premier League game time of the season.

The 24-year-old has been missing from the squad for our last four games against Southampton, Norwich, Eintracht Frankfurt and Brighton.

Up to now, the weekly update from the medical team hasn’t explained his absence. This news would go some way to explain why he wasn’t selected by Unai Emery and Freddie Ljungberg.

Dani Ceballos is the only other player out injured at the moment. He’s got a hamstring problem and won’t return to training for another week or so.

holding is shit as well, gets turned too easily and not quick enough, maybe slightly better then what we have but not by more than an inch or two we missed out on soyuncu this summer and jonny evans or gazza cahil, id rather have an experienced premier league entre back then any of our defenders at the moment either that or play two holding midfielders and tell then to sit deep thats the only way our leaking ship may last a few more months many fans are deluded by holding and chambers just as they are englishmen, watch them… Read more »

David Luiz is an experienced premier league centre back

While it’ll be great to have Holdini back he’s not going to dramatically change our season. A CB and a DM must be top priorities in January.

Will there be any money in January given FFP?

and the fact were invested in Saliba next season.
when we kick off our first championship game in august 😛 we will have too many useless cbs.

The championship wouldn’t be all bad, a lot of our players would finally find their level….

Ha, the championship top teams would probably eat them for breakfast.

There will be if we finally shift Mustafi and Xhaka!

Maybe they wont change our season, but we’re pretty much at a point where we can call this season a write off, at least in EPL terms, so we might as well give holding and Chambers a good number of minutes together, see if they can form a partnership strong enough for next year, and maybe the 10 years after that… Those two are young, the rest are over the hill.

Also when Freddie talks about opposition strikers in his prematch team talk, he can say “Jimenez hey? Send him to the holding chambers” and laugh maniacally while Per strokes a small white cat called Ryo Meowchi.

Tell that to blogs. I keep asking him to give me a monthly article but we always stall on a fee. I want five grand a piece while he has blocked me from all social media channels. Playing hard to get no doubt. He’s basically doing to me what Saliba is probably currently doing to Raul. But blogs doesn’t have the president of Real Madrid on the other line. I’m thinking about going over to the athletic but apparently as soon as you get behind the paywall it’s just emojis of a shrugging man and a monkey covering his eyes.… Read more »

Just do what Santori does and start your own blog within someone else’s blog.

Without wising to undermine Holding, will his inabiluty to play due to injury actually make a difference to the overall performance? If, as is not unlikely, without an early confidence-building goal, I consider that even Europa League football is beyond us but that we are serious candidates for relegation for the first time in our history. My father, who first went to Highbury in 1934, took me as a small child to every home and London game from the mid-50s and I therefore feel I’m qualified having been an Arsenal supporter ever since through thick and thin to say that… Read more »

We have no good options at Cback. Its not as if Holding was entirely convincing either, he was turned on many ocassions too easily. Luiz isn’t a good choice any more than Mustafi or frankly Chambers even at cback. Mavropanos even less. Sokratis was about our most consistent but even he has devolved of late. The best way to keep us solid at the back is to tighten up midfield. Torreira and Willock far too high last match trying to close down which worked first 15 minutes of either half bc rest of the forward line was pressing in unison… Read more »

We need him fit asap. I really hope he’s back for our nasty looking December fixtures.

completely off topic, but at this point would you guys take Pep?

Is that even a question? The question is would he take us?

it just seems to me, he’s lost his drive for man $hitty and is looking for a new project. with Saliba coming through next season, i think we’d be ideal for him. plus he’d be the perfect person to revitalize Ozil and unlock his elusive potential.

Pep only goes where he can buy everyone under the sun. He’ll never take an incredibly challenging position like ours. He is a top level talent and deep pocket manager, not one to get the most out of mediocrity already here

Still feel that Pep and Arteta is coming when Manc dont win CL, or even if they do. Na Na. The players will have to work to get CL though.
Well i can dream can’t i?