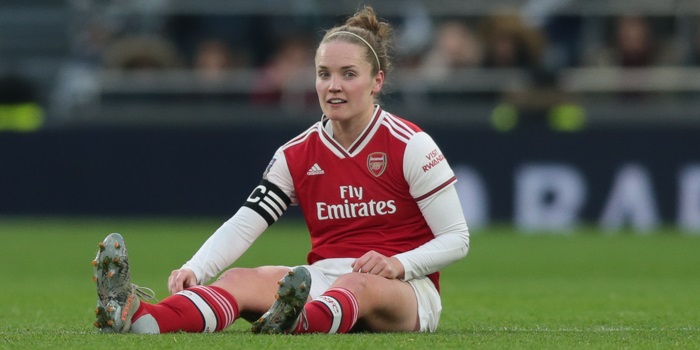 Arsenal Women captain Kim Little has won the Arsenal.com November goal of the month competition for her strike against Spurs Women at the Tottenham Hotspur Women on November 17th.

The Scotland international’s second half strike from the edge of the area was the first scored in a North London derby at Tottenham’s refurbished stadium. Kim is also the first female player to win the award, with the club opening up their goal of the month award for the women’s and academy teams this month.

Little has probably sewn up the December award too, after scoring an outstanding one-touch team goal against Reading on Sunday afternoon.

Arsenal have been planning to open up the goal of the month competition in this way since the start of the season, now that all Arsenal Women games are broadcast and academy fixtures are filmed too.

Kim’s goal earned 31% of the vote, with Vivianne Miedema’s immaculate finish against Liverpool at Meadow Park coming in second with 13% of the vote.

Got December’s wrapped up too with yesterday’s beauty. Incredible player

Can the girls go and give the boys a pep talk sometime?
Good finish, and bonus points for being against that lot at their place..

Been good to watch the women recently, will be a tough fight to the end I guess but feeling confident of another wsl title

Well done KL Bring on December10 & VM11. There were some cracking goals from the U23’s & U18’s & Senior Men as well but the girls thoroughly deserved the top two listing, no doubt with a voting boost from the AWFC fan base!!! Bring on December’s poll…..no not that one!!!

That December goal reminded me of the Podolski’s goal from Giroud’s flick. Oh how we miss Giroud, how underrated was he? Genuinely involved in all of our best goals in the last 6 7 years.

About time…I’m glad to see the club recognising the clear superiority of the Women’s team right now. Congrats to Kim!

I actually voted for her.