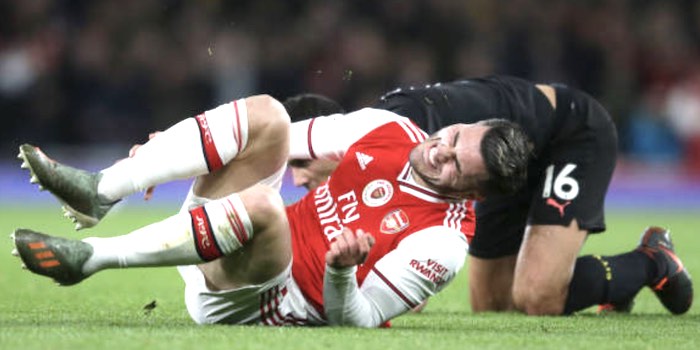 Arsenal take on Everton at Goodison Park on Saturday, and somewhat lost in all the focus on Mikel Arteta and the rest is our pressing need for three points.

With just one win in our last nine Premier League outings, we need to get back to winning ways as quickly as possible.

It will be a tough test against the Toffees, as caretakers Duncan Ferguson and Freddie Ljungberg go head to head before their full-time replacements take over.

Arsenal have released the latest team news, and there’s bad news over Sead Kolasinac whose ankle injury will keep him out until next year. Which is only a few weeks away, we know, but it sounds dramatic!

That leaves us with an issue at left-back with Kieran Tierney missing until March, so there’s a decision to be made there. Ainsley Maitland-Niles seems the obvious candidate, having played there before, but we’ll wait to see what Freddie does, and who is available for him in the right back position.

Beyond that, there are doubts over Hector Bellerin (hamstring), Rob Holding (knee) and Mesut Ozil (foot), with all three players to be assessed today before the team travel to Merseyside.

This would be the time to promote a more natural left back from the youth team you would think. Give someone a go, they may just take their chance. Hopefully whoever is picked puts in a proper shift for Freddie though, he deserves it.

We sold our youth team left back, Cohen Bramall, in the summer along with Nacho.

And we sold another one, Dominic Thompson to Brentford..

Cohen Bramall was never really an option let’s be honest & Thompson has started one game for Brentford. (In the league cup)
I know everyone wants to bash the club at the minute but it’s pointless bashing every single thing that has been done when a lot of them are (in the wider scheme of things) immaterial

Remember Silvinho got injured and we had Cole stepping up, let’s hope something like this happening, then at the end of the season we will have 3 LB fighting for their future. Much needed competitiveness.

A Different George
Reply to  SMH

And eventually, one of them will turn out to be a great player and a massive prick, and will go to Chelsea.

We have Tolaji Bola, a former England U16, U17 and U18 International, a lifelong Arsenal fan and academy graduate. These are the players we should be giving a chance to prove themselves. If not, why still keep them on the books?

haha… you got me! i thought he was going to be out for a while!

I warned in the summer this would happen, Kolasinac picks up consistent niggles, and Tierney (who I like) had giant red warning triangles all over him…. Huge opportunity for Saka now, it might not be the position he’d want to nail down, but beggars can’t be choosers, and I think he has the ability to do it, looks like he has a good engine, and his end product in the final third is very good, but he’ll need a steep curve defensively, because we don’t have any other options. With Bellerin still going through the usual struggles after a long… Read more »

It’s really true, you are taking on the mantle of the Arseblog poster whose name cannot be mentioned. You are almost as arrogant as him (“I warned in the summer”), though you are rapidly closing the gap. You know less about football, of course–his insufferably long, detailed comments about every player often have a core of insight; yours are just recycled pundit-talk. Good luck, Rich, you will soon become the most hated person on this blog.

oh dear god.. please no saka at left back. we destroyed niles doing xctly that on the other side.

So let’s just play without one then, why not we usually also play without a DM and AM on defense also, so what could go wrong!?

why not play a luiz or maybe xhaka there instead of young saka ?

Saka or Bola or Medley?

Saka’s natural position is further up the field. Medley is a centre back. Bola is the only natural left back in the list and it is on that basis that I really hope he is awarded his debut.

Our left-back will be up against Iwobi or Theo. We must have a player in the club that was confident in training against these guys.

mpls
Reply to  The Spoon

I know it’s really an on pitch application thing, but 3-5-2 just seems more focused on plugging our gaping hole in the midfield, especially if we’re going Auba and Laca.

I really fear for us if we leave Martinelli and Pepe out of the mix though. The only real dynamism on the pitch at the moment.

Mesut is left footed and can probably whip a mean cross in! Defensively I’m sure he can bamboozle attackers by looking at them confusingly. In sort of a you thought I was going to zig but I zagged manner!

On a serious note maitland niles, as I don’t think throwing Saka in would be.. Actually why not? Saka can’t do any worse

He actually did alright when he subbed in back there against City. He’s fast and tenacious enough. The big question is does he have 90 minutes of defensive focus in him?

Lots of rumoured goings, not so many rumoured comings. Even if the goings are unpopular or ineffective, we’ll need to play someone there.

Time to unearth the New Bellerin!!

Speedy recovery Kola, hope to see you back in the squad soon!
Hope Özil’s injury is not severe, so Fener keep up their interest in him.

Niles on the left, Chambers on the right; Mustafi & Luiz as center backs

Doesn’t matter who plays center backs really, they’re still gonna be shit; ever since Holding got injured we were never the same