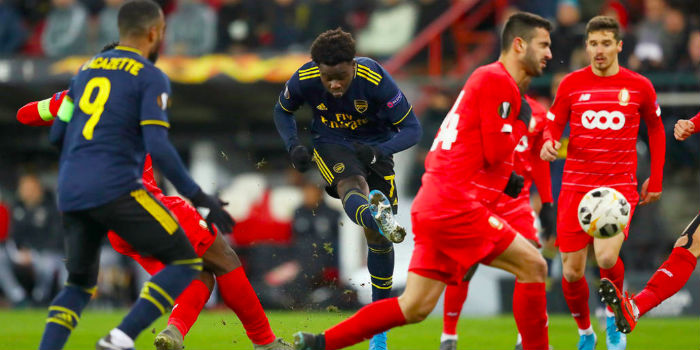 Bukayo Saka described his evening in Liege as “beautiful” as he helped Arsenal secure a 2-2 draw that ensures the Gunners finish top of Europa League Group F.

Freddie Ljungberg’s side were trailing 2-0 going into the final stages in Belgium before the 18-year-old, initially deployed as a wing-back before taking on left-back duties, assisted Alex Lacazette and bagged a neat goal of his own.

After the game, the Academy graduate played up the importance of coming from behind for the second game in a row.

“We feel we are taking a lot of confidence,” he told BT Sport.

“In our last game in the Premier League we won, and while we didn’t win here we came back.

“We always keep our heads and try to get a result because we knew what the stakes were and that if we lost we could possible be out.”

On his own performance, he added: “It was beautiful for me because that is what I am judged on, scoring and assisting, so to score and to make one is a good night.”

While Arsenal only needed to avoid a defeat by a five goal deficit to progress to the knockout rounds, it looked as though we’d finish the evening in second place despite having dominated the group from start to finish. Thankfully, Frankfurt’s late collapse at home to Vitoria made for a happy ending.

“It’s a good feeling because on the pitch we didn’t know [the result in the Frankfurt game] and were pushing for the third goal to try to win the game but Freddie was trying to tell us that Frankfurt were down,” reflected Saka.

“Everyone came into the changing room after and found out we were top of the group.

“I feel like if we lost and finished second, we would have had to face tougher teams. O

“Obviously, we are going to have to face tough teams in the Europa League but it is easier if we face an [unseeded] team next. We can take confidence and keep going from round to round and progress.”

Saka & Smith Rowe in full training ahead of trip to Prague

Brilliant cross for the first, brilliant goal, and he was an absolute menace throughout the first half.
He’s got real quality this lad.

Was lovely indeed, although the assist was even better for me. Hardly ever see a cross headed in when defence is set, but he really powered it across with plenty of bend. None of this floaty back post stuff.

If we can keep a good clutch of these youngsters together then we may look back at this time and be somewhat grateful for the experience/ baptism of fire they are getting right now. Especially when they lift the champions league!!

Goals conceded; when defending, why do players turn their back?

Call a friend. Ask him to kick a ball at you as hard as he can from four yards. Record what you do.

And really, your friend will kick it about 30 mph less hard than a professional footballer.

Ball hiting your tommy,chest or even your face will be what no one want to Experince…

And then there was Kos who seldom shied away from taking a ball (or a boot) to the face.

Which is why I think we need to be VERY careful selecting the next manager. If push comes to shove of course, we may have no choice but to pull the trigger (preferably on someone experienced) in January. BUT if given the talent coming through, we really need someone who shares ethos in development like Eric Ten Hag at Ajax or even say Simeone who can provide discipline and structure. Both these managers may be available in the summer. Wenger was open structure for far too long when the rest of the league closed the gap on quality leaving his… Read more »

I assume this was just a dig at Arteta, but I saw nothing in Emery’s tactics that reminded me of Guardiola except (what almost everyone does now) playing out from the back with the keeper using his feet. We never played with wide men, with our fullbacks moving inside of them, we never tried to overload the middle with fullbacks and ball-playing midfielders.

Watching the mighty young Bukayo out wide just wrapping his left foot around the ball got me thinking – who’s the best lefty crosser we’ve had at Arsenal in the last 20 years? No-one even comes to mind

I tell you who’s a great lefty crosser.

You, sir, deserve a tip of the hat. Made my morning.

Once a gunner
Reply to  kaius