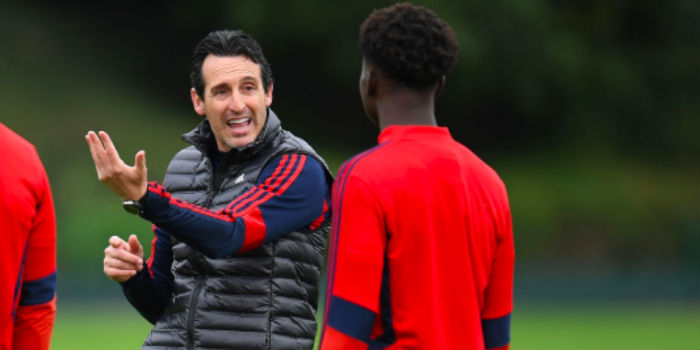 Bukayo Saka says he’s thankful to departed head coach Unai Emery for the opportunities he was given to impress at first team level.

Only 17 at the time, Saka made his debut for Arsenal as a substitute in the 3-0 win against Ukrainian side Vorskla in last season’s Europa League and he’s not looked back.

He went on to make four appearances last season, was formally promoted to the first team in the summer and has already featured 15 times in the current campaign.

“I have a lot of thanks to give him because he gave me so much confidence,” Saka told the BBC.

“He gave me my debut and he kept pushing me. I am grateful to him always.

“It’s just something I have always dreamed of, coming up from the academy to the first team.”

Saka’s next challenge is to impress new coach Mikel Arteta and he’ll likely have to do so as an auxiliary left-back in the absence of injured duo Kieran Tierney and Sead Kolasinac.

“I have heard positive things about him and I am looking forward to working with him,” said Saka.

We have some good kids in Saka, Martinelli and Willock. Maybe the key to mental health is to stop watching for 3 years.

So glad we didn’t spend the season rotating Iwobi and Mkhi. But not sure how much Emery had to do with that…

Iwobi would have solved our no 10 issues

It will probably help for Saka long term. Some experience at LB will make him a bit more aware, so he can see danger for the LB when he is playing in front of him at LW. We’ve had too many wingers in recent history who don’t see danger when it’s staring them in the face, leaving our fullbacks to get overloaded 2v1.

Must say, I really liked how Saka also pushed forward at times giving an outlet. His crossing is always good too.

Our wingers will become more if a sustained threat if the midfield is able to impose itself.

Positive vibes are much welcomed.

Rightly so. Emery did a few things right and Saka was one of them.

Saka was one of the bright lights already last season.

I am not sure i buy fully in to that narrative. I agree that the senior players are letting us down. but the young players seem to be thriving in the pressure Sure they can ebb and flow a bit. Nelson looked good then out of his depth and back to good. Willock the same. Saka and Martinelli haven’t put a foot wrong really. Smith Rowe needs a chance Guendouzi is nearly the finished article. i hope mikel arteta works with them and puts them further under pressure. This isn’t a long career and once your body holds up you… Read more »

This boy would come good.

I was going to say that Saka should choose Nigeria over England to shine at the international level without unnecessary pressure in the English media and also for an easier pathway. But seems like some of the brightest talents on the wings are in Nigeria. Olayinka, Dennis and Osimenh who impressed in the Champions League are all Nigerian wingers!

Very noble of Saka to say this. There wouldn’t have been any need for Saka to give props to Emery, cause most likely he won’t encounter him again at the same club in his career. I am glad that some positive things that Emery has left behind are also recognized.

Yeah thanks a lot for picking the wrong lineup every single game. Worst manager EVER.