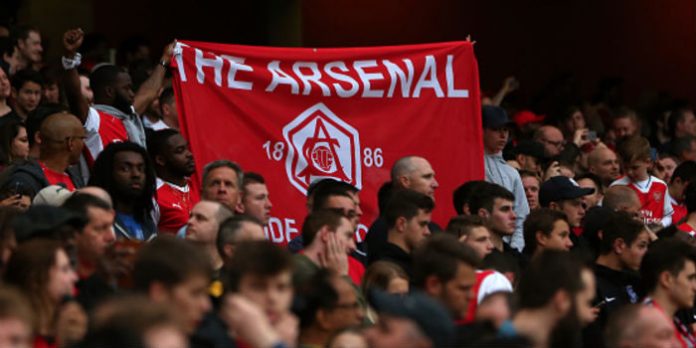 Arsenal have fallen out of the Deloitte Football Money League for the first time since 2001 as the cost of playing Europa League football for a second successive season takes a toll.

To rub salt in the wound, neighbours Sp*rs have climbed above us (and Chelsea) into eigth place, boosted by the TV cash that accompanied their run to last season’s Champions League final in Madrid.

For the first time, Barcelona, who recently implemented a new operating model that has seen them bring merchandising and licensing activities in-house, top the league with Real Madrid and Manchester United in second and third respectively.

Eight English clubs are in the top 20 with four Italian clubs, three German, three Spanish and two French making up the rest. 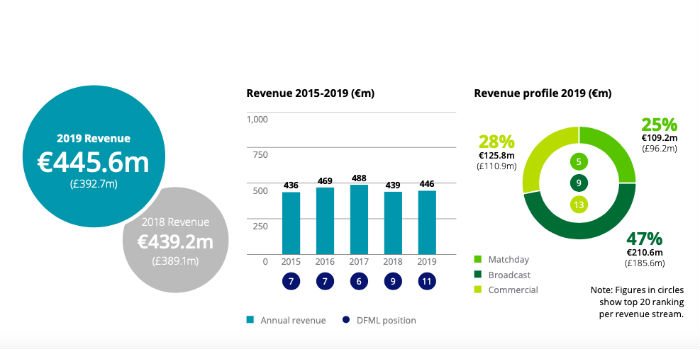 Source: Deloitte Football Money League Report 2020- Matchday revenue decreased by £2.7m (3%) despite us playing the same number of home games as last year. The suggestion is that people stopped attending and spending.

“Whilst Arsenal should expect a rise in commercial revenue from a lucrative new technical sponsorship deal with adidas (replacing Puma) which commenced for the 2019/20 season, continued absence from the Champions League means it is unlikely that Arsenal will return to the top ten in next year’s Money League. In revenue terms, without the financial boost of the Champions League, Arsenal find themselves in a challenging position in the middle of the Money League where those below them are aspiring to challenge and grow by using innovative methods to develop and change the way they operate and those above have the buffer of the Champions League providing financial security. The club’s strategy will likely have to react to the threats from behind them in the absence of improved on-pitch performance in the coming years.”

As always, the full report is an interesting read when it comes to getting an overview of football’s finance trends.

“It seems clear that any club that understands both its fans and their related data has a greater chance of moving up the Money League in the future.”

One for Stan Kroenke and KSE Entertainment to have a think about.

Have we lost comments? Possibly.

hey Andrew, the links to the Deloitte PDFs are incorrect…

In another topic, why no poometer? Why no transfer stories, Andrew? We live for those poo days even if it’s a smelly, runny poo. Have you lost your place as an ITK?

We’ve never claimed to be ITK! And there’s no transfer news to rate with poo

I hope Leicester makes the top 4 this season. That would mean two of Chelsea, Spurs and United missing out.

Don’t ask about United having the Europa route because you already know who my hopes are on. I hate United as much as you hate spurs.

Barca almost double us ! And they are developing the Nu Camp further in the coming three years. Bayern – who according to IG we were supposed to emulating – comfortably clear.

Having said that, we are sixth amongst EPL Clubs. But we’re far from sixth as the table stands. Let’s hope Arteta can get us back to where we need to be. But this is clearly going to take at least another 18 months, because the top four is gone for this campaign.

Hopefully we can get back to the top four next season. I’m excited to see the youngsters kick on with the experience from this year, specially Guendouzi and Willock.

“The club’s strategy will likely have to react to the threats from behind them in the absence of improved on-pitch performance in the coming years.”

Somehow I don’t have a great deal of faith that it (strategy) will ….

Those figures don’t include transfer revenue, rendering them pretty useless for anything in my opinion.

my thoughts and prayers to the Kronke’s during this period of immense pain.

Good. Maybe the owners will notice.

I’m not really bothered by these figures. It’s not as if we were ever a big spending club compared to our revenues over the years so I don’t see why we should be unduly worried by this now.

It simply gives the owners a new excuse to explain our inactivity in the market besides the time tested and trusted; ‘If we see any player good enough to improve the squad and is willing to come, we’d do it”

Thats why we beat multiple time our transfer record last few years and our total spending .do you even follow arsenal
Its not money we ve spend the problem.
its the way we bought and sold player last 5/10 years .thats caught us this season.
The value on the pitch doesnt reflect the the price we have paid for players .and we never make hig profit from player with maybe iwobi the only one .

Our sales and management of players has been sordid.

People like to complain about Wenger and Dick Law but since new regime first with Mslintat and then Salenhi in charge we have been no better if not worse.

We failed to retain either of Ox or Gnabry and we lost Ramsey too on a free transfer.

Too many fans need a wake up call. They have their heads up their arse.

72m eventual pay out for Pepe look on paper to be great advertisement for Sanlehi but in reality its going to weigh us down. You pay that much for a one season wonder from Lille and you are in danger of dousing his hunger. PLUS we had potentially equally good if not better options in Ziyech (Overmars recommended him) or Fekir last summer. Frankly we should have bought Mahrez when we had the chance. he was trying to get out of Leicester but Mslintat preferred to sell Alexis to United for marginally more money and take on Mkhitaryan for free,… Read more »

Well fuck you too Deloitte you terrorist funding bastards.

Stan needs to wake up and spend some money in this windiw, otherwise it looks like we won’t be playing any Europa League matches next season.
The next 3 matches will be key too, it will give us a glimpse of how life would look like if Abu left us. We have to start winning and make our squad stronger.

He spent money. Since Mslintat and later Sanlehi have taken over we have been spending.

Last summer we committed 72m on an erratic Pepe thus far and 27m on a non existent Saliba (who only made 19 starts last season for St Etienne). That means we have 20m odd back loaded each yearly transfer window.

Are we spending efficiently? I don’t think so.

Not looking good, we are approaching half the revenue of Barca. They will be able to buy better players and beat us consistently unless somethign changes. Worse, we have 5 other teams in the PL that are ahead of us, including Spurs who will have a better chance of winning a trophy than previously.

We need trophies (or the chance of them at least) and/or CL football. Lots of season ticket holders aren’t turning up regularly, if we don’t give them some hope we will lose them and revenue may be hit further.

Some teams are resurgent like Inter as well. Its a more complicated landscape now. Even Everton are climbing again with real ambition and Ancelotti. If Leicester stay in CL contention spot this season a real possibility, they are an attractive team to invest with Rodgers on the helm. If we need a wake up call its now. We are around where Wolves are at the moment.We are no longer a big club. BUT some fans are deluded. If we do not make the right moves we will throw it all away. As much as it can get better, it can… Read more »

Any thoughts on the John Stones loan story Bloggs?

Arsenal are the 11th richest club in the world, but don’t get to play Champions League. Shows the strength of the Premier League but also the contradiction of European competition that big clubs get excluded, whilst small clubs from minor leagues compete against the best. Time for a Super League perhaps.

Remember when we were meant to be the new Bayern Munich. Utterly embarrassing.

Who gives a fuck about revenue? Liverpool make “only” 600 mil but are the best club side in the world! Properly managed or club could do great things.

Ah yes, you must be one of those cunts who declared they don’t mind missing out of CL Football.

santori
Reply to  A P

They don’t live in reality these fans. They expect a clear out and a massive spending spree but they don’t care where the money comes from. Or the fact that losing out on CL for 3 successive seasons no longer makes us an attractive club to go to for top players. It makes the work of recruitment much harder (let alone off loading the likes of Elneny and Mhkitaryan never mind Mustafi) Same people who deride the CL top spots now pretend to want to give Arteta the leeway to rebuild. When he fails to reach top 4, watch them… Read more »

santori
Reply to  A P

Fatgooner
Reply to  A P

Yes I am! What’s the point of qualifying for a tournament that we can’t win and will get humiliated in?

We spent years just making up the numbers.

It seems we are MID TABLE.:D Schadenfreude. Remember when MANY fans said it could not get much worse without Wenger. Anyone will do… get Eddie Howe. Wenger had his own faults but he was incredibly consistent. Nor have Mslintat or Sanlehi and higher price purchases helped our cause any better. This season we have had spells without Mustafi or Granit (both incredibly expensive for what we get from them) and still we flatter to deceive which suggest our faults lie way beyond them. Wenger warned us about the importance of 4th place pot derided by pundits and press. Fans preferred… Read more »

“If you eat caviar every day, it’s difficult to return to sausages”

Call me unrefined but I prefer a good sagey banger any day to fish eggs.

Things don’t look terribly likely to change much under Arteta either. Sure we see “improvements” but the bottom line is we still can’t get over Palace and we are not banking the points we need for immediate impact. Nor has Arteta the seeming clout to act as counter weight on Sanlehi. the inexperienced Edu was appointed to be under the firm control of Raul nothing more. Many fans prefer to imagine things were far worse with Wenger and Dick Law. The reality is they actually spent on players rather well. Purchases on Santi Carzola, Laurent Koscielny indeed Arteta and Metersecker… Read more »

One more season outside top 4 is going to leave us in even bigger mess. That’s the reality. Arteta is reliant on Sanlehi and Edu to buy players. Thus far Sanlehi has been hit and miss. He certainly has not managed sales very well (see Ramsey) Edu is zero experience (Albeit gift of Martinelli welcome) If we truly had ambition to regain the heights, we should have brought in Luis Campos at Lille to help. It may have meant shifting Sanlehi up stairs but so be it. Raul was “Director of Footballing relations” (whatever that meant at Barca). Maybe he… Read more »