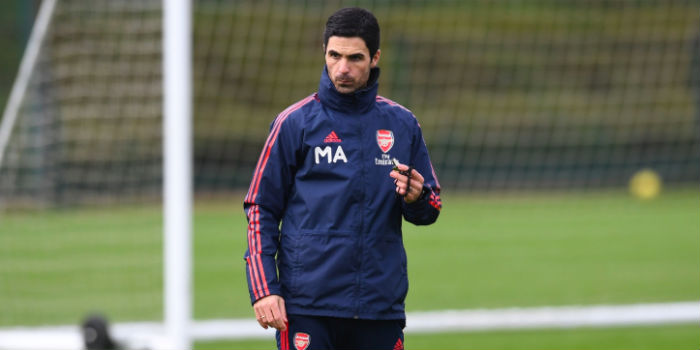 Mikel Arteta says he expects Leeds United to be in the Premier League football next season and thinks coach Marcelo Bielsa is one of the best in the business.

The Elland Road outfit haven’t played in England’s top flight since they were relegated in 2003/04, the year we went unbeaten, and even tumbled down to the third tier for three seasons between 2007 and 2010.

Bielsa’s surprise arrival in the summer of 2018 has sparked an upturn in fortunes. They finished third in the Championship last season before losing to Derby in the play-offs and this campaign are level on points with West Brom at the top of the table, eight points clear of those below them.

Given their form, the Yorkshire club will be a threat when they visit the Emirates for the FA Cup third round on Monday.

Asked why he believes Leeds will earn promotion this year, Arteta said: “The way they play, the manner they behave, I follow their coach for a long time and I know how tough it will be to play against them.”

In our coach’s eyes, Bielsa stands out because his players never give up. Praising his opposite number he said: “What he gets out of his team, how he makes them fight and challenge and run and compete, and never give up in any game or any circumstances.

“He generates that belief in the players, those demands and that is why, in my opinion, he is one of the most successful managers.

He added: “To do that consistently every three days, at that level, is very different.

“And for me the best thing is that when you talk to players that had him as a coach, the words that they have for him are always positive. They were better players after [playing for him], better people, they understood the profession better.”

While Arteta has taken over at the Emirates as something of an unknown quantity, Bielsa thinks his close relationship with Pep Guardiola will stand him in good stead now that he’s the main man in the dugout at Arsenal.

“Always, (someone) who is a colleague of Guardiola has an additional value,” the Argentine told his own pre-game press conference.

“I think that Guardiola is the best manager in the world and as a great manager, of course he distributes responsibility in his staff.

“Arteta’s position in his staff was important work and after, if a club like Arsenal chose him, Arsenal does not choose him just because he was staff of Guardiola. This is just one fact of one person that has more qualities than that.”

Arteta gonna show Biesla who is the boss!!

The question being, who will Leeds put out there?
Rooney-fired Derby ‘B’ team beating Palace 1-0 today shows that Arsenal must put out a strong side … maybe Laca will get his mojo back and blitz them. Hope so.

I want Eddy to start upfront, bang in a hatrick and do ballsack celebrations towards who ever wronged him at Leeds..

If he does, he can’t go out on loan again until the summer. You can only play competitively for two clubs in one season.

Our next game is Saturday so there is a chance to rest after Leeds. We could use a cup run to continue our positive vibes. We need to win this and avoid a replay at Elland Road. Hope he plays a strong team and only rests a few

We have often enjoyed watching young players grow into great ones (E.g. Thierry, Cesc, RVP – the last 2 ofcourse before they engineered their moves and now hopefully Martinelli).

Probably in many of our lifetime of following Arsenal, this maybe the first time we are witnessing a young coach beginning his career with us. Hope he grows into a great one, the early signs are promising. Ofcourse there will be tough times to navigate, during which we don’t know how Arteta will react but it looks to be interesting.

Do think arsenal should go hard for this win. Enough days to recover. COYG!!

The feel good factor must continue tomorrow.
A good win, with a healthy scoreline as a bonus, will put the team in good stead for Crystal Palace.

Looks good to me but Nelson didn’t start against United so should start tomorrow. Aubameyang can get a goal from nothing so I’d have him as insurance policy over Laca. And I’d also definitely not risk Niles to injury as at right back Chambers is a write off for the season and Bellerin’s fitness is unpredictable, and on Saturday right back will likely be up against Zaha at Palace. So I’d go for Martinez; Mustafi, Luiz, Holding, Saka; Guendouzi, Willock; Nelson, Ceballos, Smith-Rowe; Aubameyang. Subs: Leno, Mavranpanos, Sokratis, Xhaka, Ozil, Pepe, Lacazette.

that is the most bielsa-style ‘praise’ i’ve read

We should respect Leeds but also take the opportunity to rest players who’ve played a lot of minutes over the last few weeks.

Martinelli should be the first name on the team sheet

Play an experienced backline, a fairly experienced midfield and then just unleash the kids up front.

Still want to see Pep build a squad without limitless resources before I will agree with Bielsa about his claim that Pep is “the best in the world.”
His comments about Arteta are nice to hear though, particularly when we live in an age where Mourinho still has a job and classless comments are everywhere.

Sloppy Arsenal all over again