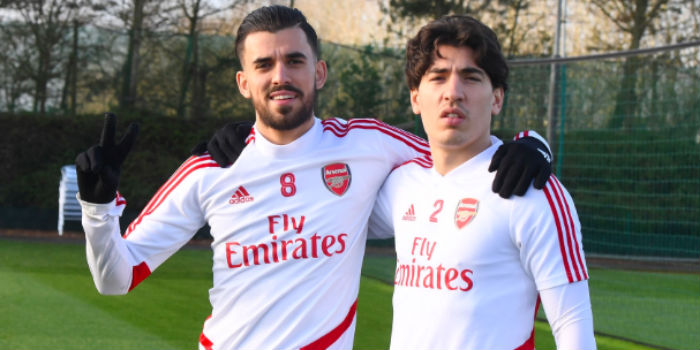 Mikel Arteta says Dani Ceballos is training well after his prolonged spell on the sidelines.

Eyebrows were raised when the Spaniard wasn’t part of the matchday squad for last weekend’s game against Crystal Palace but the boss insists there’s no issue, it’s simply a case of waiting for his compatriot to get fully up to speed.

Signed on a season-long loan, it’s fair to say we’ve not seen the best of Ceballos since he initially impressed all and sundry with his close control and trickery in the 2-1 win over Burnley in August. That’s a long time ago.

“Yes,” replied Arteta when asked in his weekly press conference if Ceballos is in his plans.

“Dani had an injury where he was out for almost two months and had to go to Madrid for his rehab,” he added.

“He came back and in the first few weeks I didn’t think that he was physically at the level to compete for starting games.

“It’s true that I have players in that position who have been performing really well, and last week when I believed that he was ready to step in, I decided to pick another player.

“But he’s been training good, I’m happy with him and I know him really well, so there’s no issues there.”

Ceballos was due to use his spell in London to gain more regular first team football and to prove to Madrid that they have a bona fide star on their hands.

The fitness problems, Arsenal being bad and Unai Emery getting the sack haven’t really helped him do that. Luckily there are still a few months for him to make an impact.

Arteta also gave a quick update on Hector Bellerin who has been on the cusp of a return to action for ages but continues to struggle with a hamstring issue.

“He has been training with us for the past few days, he is looking much sharper, much better.

“He needs a little chunk of training sessions before he is ready to compete but he is looking much better.”

Bellerin plays up the return of dressing room discipline

Amn at RB instead of Bellerin works better for Xhaka at the moment anyway.

Will be interesting what happens when Bellerin is firing on all cylinders again.

I think Bellerin is going to thrive in Arteta’s system, and getting the opportunity to tuck into a midfield three at times during the match should present him with plenty of interceptions. I’d like to see Ceballos get a look in Xhaka’s role at some point over the next few games, at least as a sub for now. While Xhaka gives us some great range, Ceballos can provide much more stability with the ball at his feet. Willock should get a look by the Bournemouth game, too, as he could be a dangerous player on the run with Laca’s back… Read more »

Firing on all cylinders? I’m not sure if it’s because he’s been out so long or because of injury why your showing sympathy, but bellerin never was or have been a good defender decent going fwd because of his pace, but he still has a lot to work on in terms of his final ball and decision making. When it comes to defending he’s a bit clueless, he’s not exposed as much because he use his pace to make up when he’s out of position but has to learn to read the game better, and learn how to defend properly!

Mate, you’re talking utter rubbish. Just before his injury Hector was among the top 3 RB’s in the league, possibly even top two.

These returning guys can help turn draws into wins.

To be fair, been quite happy with Maitland-Niles but can’t wait to have a fully fit Bellering firing on all cylinders for us again 🙂

“Hector Bellerin who has been on the cusp of a return to action for ages but continues to struggle with a hamstring issue.”

I would personally like to see AMN back in central midfield. I believe he’s miles better than than Guenduzi, and heck, maybe even better than Xhaka! You can even see it now when he strays in-field. He carries the ball well, has pace that he utilizes intelligently and is technically more astute. I