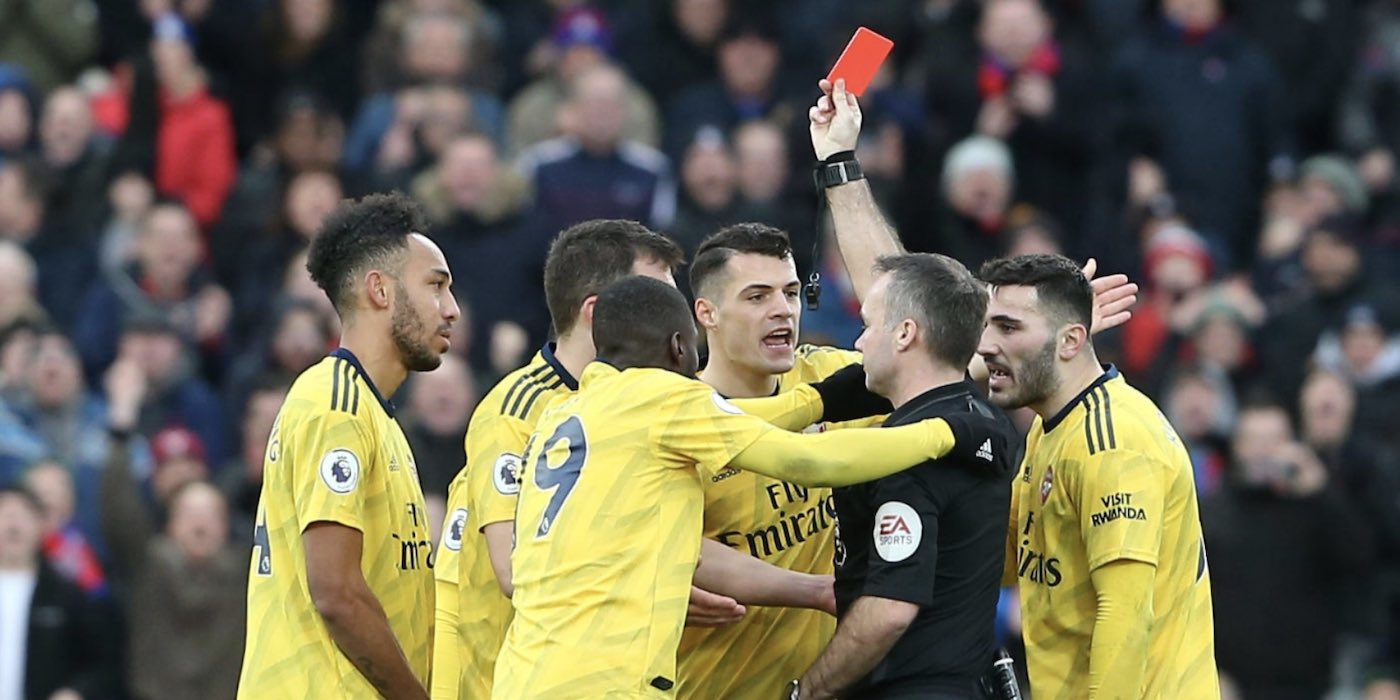 Pierre-Emerick Aubameyang’s sending off in the 1-1 draw against Crystal Palace today means the striker will now automatically miss three games.

The captain was initially shown a yellow card for a foul on Max Meyer, but after a VAR check, that was overturned and referee P Drinker handed out a red.

It’s a problem for Mikel Arteta and Arsenal, as the team is not replete with goalscorers at the moment, particularly away from home.

Unless there’s a successful appeal, and I’m not sure why we’d even try, Aubameyang will miss Sheffield United (H) and Chelsea (A) in the Premier League – as well as the Bournemouth FA Cup tie, a game he would probably have been rested for anyway.

Speaking afterwards, the Arsenal manager didn’t have any complaints about the decision.

“I just watched it and it looked nasty, to be fair,” he said.

“Knowing Auba, there’s no intention to make such a tackle. Hopefully he hasn’t been injured and we are sorry for that.

“The decision was made and we have to accept it. It’s a massive blow. We know how important Auba is for the team.

“Maybe we’re going to lose him for a couple of games.”

Auba admits to struggles, promises to get back on track

It was a red, but so was the flying two-footed tackle the Palace player did a few minutes later. The only difference was that their guy had his studs in the ground when Aubameyang’s tackle game in.

VAR has simply added more inconsistencies than before. Also their goal was offside. I think it would have been harsh to overturn it, but then why bother with VAR?

What silly nonsense the game has become.

Why am I waiting for moderation. Probably blogs is checking VAR to see if I’m legit.

Bodie CI5
Reply to  Supporter since 1970

I’ve been on moderation for months now, come on blogs this is as painful as var

HelderHughes
Reply to  Supporter since 1970

If you really want to see the silver lining it could be a massive moment for Martinelli / Saka to step up. It feels like Martinelli especially deserves a decent run in the team and is more suited to the LF role than Auba. Either Laca starts firing them in or Auba could take his natural position of CF on returning.

VAR will solve the problem
Reply to  HelderHughes

And then considering Andy Robertson’s tackle on of the spu*ds player…(forgot his name) that VAR completely ignored. Where is the fucking consistency!
VAR seems to be determined to hand Liverpool the title… i was hoping that a cunt like Mourinho might have a purpose in life and that is to beat the Mugsmashers…he goes again and proves himself to be an useless c**t, once again. Some other spursy cunt missed a fucking sitter…make u wanna think Spuds just wanted the Mugsmashers to win so that they can equal our Invincibles

Definite Red but surely VAR should have also looked at Zaha pushing and causing the injury to Torreira.

I really dislike Zaha, that’s twice that gimp has cost us important points and I sincerely hope we never purchase this tool!!!

Definite Red but then so was the sneaky Zaha push causing the injury to Torreira.

Defintely a big loss for us .. though I k ow Martinelli will fill in quite well ? but How did Ayew not get booked all day long?

Ayew was very horrible with those heinous tackles. I still can’t believe how the ref and the VAR guys couldn’t see those with that hospital push from Zaha. Very inconsistent lot.

Tackle looks SOOO much worse in slow motion. Watching live via TV, I thought it was nothing. Can’t complain about the decision, but… if that’s the standard, where were Ayew’s multiple yellows for repeated late challenges? And was the Tomkins tackle really THAT different from Auba’s?? Huge loss for Chelsea and Sheffield.

Homer
Reply to  Guns Up

Yes, I’ve no issue with the red. It wasn’t malicious, but it was a little out of control, and certainly dangerous. But as others have said, maddeningly inconsistent application. Several of the tackles on Pepe in recent matches were worse and got nothing other than a free kick. The shove by Zaha injured Torriera, and Palace was upset they didn’t get the ball back. And it looked like there was an offside in the buildup to their goal. None of it reviewed. In any case, the rest of the attack desperately needs to step up now. Yes, Ozil, Laca and… Read more »

Great comment.
Since when is VAR used on every challenge? Answer, it isn’t. Or isn’t supposed to be. So we have yet another layer of subjective, judgment calling. Its total BS and is merely another layer of bias overlaid on the abysmal officiating in the English game.

They were kicking the daylights out of Torriera and Pepe but no calls. No VARs on any of the fouls by palace of the tackle by Tomkins? … Ridiculous.

The red card was fair enough when you see it again, but how did Tomkins not get a red to match after going through on Martinelli?

Of course, after Pawson let Jorginho stay on the field against us 2 weeks ago, we shouldn’t be surprised by his inconsistency as VAR official too!

Get rid of VAR, it makes everything worse. No benefit.

Unless you play at Anfield

The greatest innovation to be brought into the game. It’s been working very well for several years in all other countries and is making the game so much fairer as it assists the referees so that that there are far fewer bad decisions. At present it’s not being used correctly in the Premier League owing to the incompetence of our referees but even so there are far fewer wrong decisions being made. Our referees should be sent to other countries to be shown how it is being used without all the controversies we have her. Technology works well in cricket,… Read more »

Limpar from the halfway line
Reply to  Martin

I HATE it. It’s wrecking the flow and worst of all, killing goal celebrations for match going fans.

Or perhaps it’s being deliberately misapplied for a corrupt purpose.

It’s not VAR, but the officials using it. How can they make worse decisions after multiple views!

It’s been used here in Australia for several years and it’s still terrible. It really strikes at the heart of the entertainment of football.

Yes, it was a red card but surely a good referee would have given it anyway. VAR is not improving the performance of referees. You could argue referees and those running the line are almost redundant. They don’t have to improve their own performance anymore.

Poor Auba is upset, he was a fraction late but not malicious. Shit happens, it was just one of those unlucky things. It’s a red by the letter of the law, but if that’s going to be enforced we should have benefited from lots of games against ten or even nine men, some of the challenges on Pepe, Martinelli and Torreira have been shocking. It always appals me that you can smash someone up and that’s seemingly OK if it’s an Arsenal player you’re hurting.

Red, yes, but what about the matches where pepe got mugged.

Arteta is changing a lot in a short time. Can just imagine how good it will get as he continue to train with the squad. But we have to admit that some players are not good enough. That team doesn’t look the same without Torreira. There’s a few key players there but the rest are not good enough for Arteta’s philosophy. The board need to support Arteta to bring in some reinforcement even if it’s loan deals.. With Auba out we really need Pepe to step up cos Auba gives us a lot of goals..

Limpar from the halfway line
Reply to  Guendouzi Oueddei

This struck me today too.

Xhaka has redeemed himself somewhat but I still don’t see that he is arsenal quality.

Same could be said for a few out there today.

Admittedly some are kids who will improve, others maybe get better with coaching but this is a limited squad. No matter how good Arteta is, he can only take them so far.

I think Xhaka made similiar tackle a few games ago and it was also looked but they didn’t show anything. The tackle on Guendouzi against Norwich – nothing. The consistency of the decisions is a problem. Also when they will start getting reds or at least yellow for the pushes like Zaha did. That is even worse for me than misstimed because it is done out of sheer wickedness. Suspectible offside for their goal too. Looking again it probably wasn’t but they didn’t even look. I hate those small margin offside calls but again where is the consistency. I read… Read more »

Where’s the consistency? Tomkins flew in two footed in an uncontrolled slide gets away with a yellow.

Not that it matters, but I think Auba was as likely to be rested for Sheffield as Bournemouth.

Was a red, but VAR is hot garbage because it’s run by morons.

Martinelli should come in and we need Lacazette to be better. Maybe this will be his moment.

Will Lacazette be banned?

Anew had a good day. Two late challenges stamping on our feet and a shot going nowhere that he gets a goal for gives him man of fucking match. Should have done lottery last night.

I think the tackle was bad and if VAR was not present, it would have been a yellow however Lacazette get a yellow card for Persistent fouling and Ayew fouls up to six times.( a particular nasty one on Torreira in the first ten minutes goes unpunished. Pepe had his legs held and the next thing, he is the first player that gets booked. I am OK with VAR if it was to be used properly. Crystal Palace has done us twice thanks to VAR or should I say the officials who are looking at it. I watch a lot… Read more »

If you watch VAR in other European countries, you will notice that the referees go to the monitor alot. And I think that should be done in England as well. Why would you listen to some guy telling you that you decided wrongly? Take a look at it yourself and then decide for yourself ffs..
Slowly but surely I would opt for a VAR that could only make the ref go to the monitor, but withough the ref viewing the scene on video himself, there should be no overturning of decisions possible.