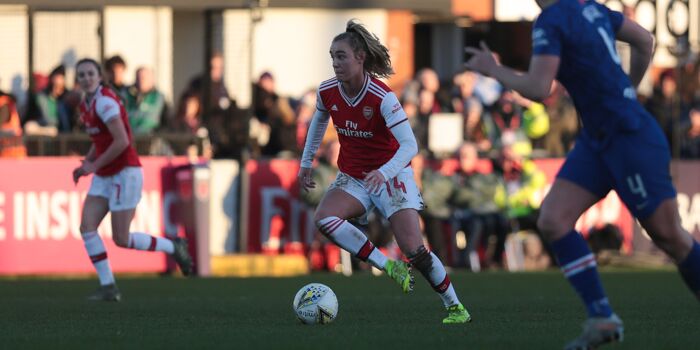 Arsenal qualified for the final of the Conti Cup to set up a meeting with Chelsea, after beating Manchester City 2-1 at Meadow Park on Wednesday thanks to goals from Vivianne Miedema and Danielle van de Donk. Tim Stillman caught up with Jill Roord after the game exclusively for Arseblog News.

On qualifying for the final….
We’re delighted to be in the final, my first one in England. We want to win everything, so it was a very important game for us tonight. I’m very happy!

On getting a second goal just before half-time…
I think we controlled the whole game I would say, but definitely the first half. We had a lot of possession of the ball but we could have scored more goals and in the second half we had chances too, but we controlled the game and we won, so that’s the most important thing.

On conceding immediately after Manu Zinsberger’s penalty save…
Maybe we just switched off a little when we shouldn’t have. Manu made a very important save and then immediately they score from the corner. We probably just dropped our focus a bit and that was stupid.

On playing Chelsea in the final…
That wasn’t us a few weeks ago [when Chelsea won 4-1 at Meadow Park] that wasn’t Arsenal, so we’ve got the chance to show a better performance and it’s a final and it’s going to be a different game. It’s good to play against Chelsea and it will be a cool game for people to watch.

On whether this victory will have any impact on the WSL game between the teams on Sunday…
I don’t know but we’ve got a good feeling now, we feel confident for Sunday after this performance.

A perfect combination to give @ArsenalWFC a two goal advantage#ContiCup pic.twitter.com/lQhCnYicqg

brilliant from the ladies

Fantastic result! Hope we smash that lot in the final. COYG!

Same result at the weekend would do fine!
We’re in the final now so let’s just stick to what we know and we might just beat Chelsea for a change.

Chelsea is a strong team but I don’t see a repeat of that last game in which the Gunners fell well behind. There were two brilliant strikes by Chelsea players that aren’t likely to be repeated (fingers crossed!) plus a muffed play by Zinsberger on the Kerr goal when I don’t think she saw the cross coming in because of the sun. (Kerr headed the ball no more than 5/6 feet from the keeper.) As for today’s match, a very solid performance–lot of hard defensive work by the squad. Always impressed by Van de Donk’s work rate–she’s all over the… Read more »

Love the ladies team, credit to the club. Here’s hoping we get the Chelsea hoodoo out of our system and wallop them in the final. Oh and three points on Sunday against City in the WPL game is a must as well!

Another brilliant goal from The Viv! COYG

A good team learns from defeat. This is a very good team with resources well managed. Few would have expected Captain Kim & Vice-captain Jordan to be rested tonight but the team got on the front foot early and City looked tentative.
A confidence booster for Sunday for a different challenge and different resources.

Cracking goal from viv, missed her goals of late!

So proud of our Ladies! And tons of credit to Montemurro – he really looks like an excellent manager and an absolute credit to our club!
Always lovely to open up the Arseblog at work and see another victory, and a Citydefeat 🙂

We are well able to beat Chelsea in the final

Well taken goal by Viv. Whatever our Chelsea hoodo is, it’s time to break it. Hope our midfield is more functional again them in the final. And have Viv more shots at their keeper!

Well done Jill Roord and the girls! Got the job done – and without Little and Nobbs, too.

Revenge over Chelsea? C’mon girls- DO IT!!

Did really get a clear view of it from the other side of the pitch. So the FA Player video re-run of the game shows how fortunate Beth was not to suffer serious injury when Ms Hemp barged her into the hoardings. I can now appreciate why Joe was going “ape” in the dugout. His eye sight is obviously far superior to mine and the referee who I don’t think sanctioned the perpetrator with even a yellow. Irony, the referee was able to see the minimal contact Ms Hemp received to “win” the penalty!! As it was recorded on their… Read more »

Got to admit that Joe has some balls to rest Kim and Jordan in that game, if they really were rested. (Jordan might not have been 100% anyway and we’ll see if Kim is in the squad on Sunday). Semi-final, against one of the best teams in the league and after quite disastrous Chelsea game from managers perspective. After that game it would have been easier to put your best players on the pitch. Respect!

Kim rested for sure. She was in the stand with Beats, Kat & Dan C supporting ???

Good to hear. This season we have had couple of comments like “she is ready to play, we are just extra cautios” and after that players disapear :). Kat has been out basically whole season and Beats has been gone like two months for now.

I confess that I found those sort of “injury updates” a tad frustrating. Tim explained some of the reasoning behind this. The obvious one being to keep the opposition guessing on likely line-ups and another was more personal to the players. As most are on
relatively short contracts if a player gets tagged “injury prone” it could have a significant impact on future contract offers in terms of length and earnings.