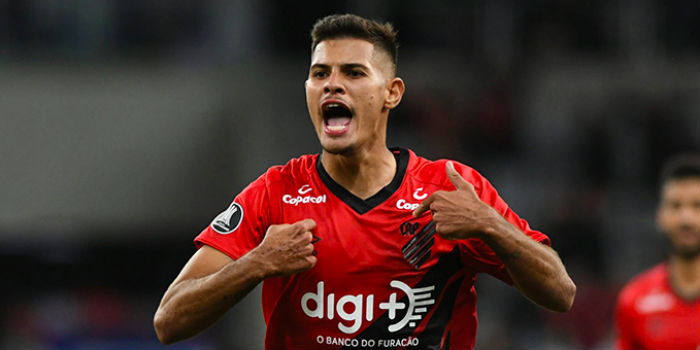 The 22-year-old, a member of the Brazil under-23 side that is hoping to qualify for the Tokyo Olympics, is also the subject of an approach from Portuguese side Benfica.

It doesn’t sound like we’re looking at Guimaraes as a January recruit, we just seem to be putting out feelers for the summer.

Midfield is an area Mikel Arteta quite obviously needs to reinforce, especially with the long-term future of Granit Xhaka still in doubt. What’s more with Edu’s little black book in play, it wouldn’t be surprising if we’re looking a little deeper at what’s on offer in South America.

“Let’s study Benfica’s offer. On Monday we will meet the club board to assess this situation.

“Arsenal are interested, but will only make an offer towards the end of the season.”

Guimaraes is valued at around £20 million.

Does he have half European citizenship or are we going to send him on the Panathinaikos / Sporting Lisbon / FC Twente / Grasshoppers European magical mystery tour before selling him, attempting to buy him back in order to sell him again?

Plus he’s older than the usual players we send on that tour.

A real one or a Sylvinho one?

Does it matter after Feb Brexit?

If i had money i’d hire a bunch of people and make a video highlight of myself playing. There’ll be 30 yard screamers, shoulder drops and stepovers galore.
Am i missing anything? Oh ya. I’ll also put in a couple of assists jusg to show that im a team player.

If he’s anywhere near as good as Martinelli we should get him signed up before he goes somewhere else. Surely we could take the money for Mkhitaryan and Elneny and use that if we’re totally broke?

He is a pretty good player, playing style similar to Arthur (Barcelona), european citzenship or not he is very much in contention for the national team, work permit shouldnt be a problem at all
Also in Brazil is easier for players to be sold in january, because the season ends in december (Just like england’s July transfer window) and clubs dont like to sell in the middle of the season, Arsenal should act quickly on this one

Oh yeah? What would you know about Brazilian football Brazili…

I would prefer Gerson, from Flamengo

Finally a transfer story but the poo meter?

I’ve defended our self sustaining model to my mates for the last 15 years and have been ridiculed by them for doing. Probably rightly so given what’s happened to our club in the last 3 years and how crazy money in football has gone. However, i can’t help but feel that this is the type of player that we should be having a punt on. Given that Abramovich shunted £300 million into Chelsea last year, Kroenke should have no problem investing £50 million so we can get a CM and CB.

I love this blog, and I also love the way they run the news section. What I don’t love, and what I have blacklisted multiple other sites for, is the clickbait headlines. “BRAZIL MIDFIELDER ON ARSENAL RADAR” is only one step removed from (disables filters in newsnow to grab an easy example) “Arsenal prepare €25m bid for Brazilian midfielder” or “Sources: Arteta tells friends he wants PL 23-yr-old to be Arsenal’s marquee summer signing”. Please, Arseblog, just give names in your headlines. Yes, you might get less clicks (I’d actually be more likely to click on links with a name,… Read more »

To be fair I think they didn’t include the name just because most of us wouldn’t know who he is.

His photo was in the headline you see before you click through, so it’s not like they’re trying to pretend it’s Coutinho!

This was discussed on talk sport by the South American ‘expert’ yesterday, apparently half decent, but so one footed the other might as well be a peg leg. But the good news is, it’s his right foot. So if we tie him and Pepe together, we’ll have one hell of a Cazorla esq player.

Also listening to the brexit guy on the podcast, if we want some of these deals done, we best get moving, or it’s going to become a hell of a lot more difficult?

If whoscored is to be believed, his strengths are
passing,throughh balls, key passes. He also likes to play long balls.
On the other hand, his weaknesses are aerial duels and concentration.
Sounds familiar..?