THE LOWDOWN
Arsenal will look to recover from consecutive WSL defeats with a North London derby in front of a sellout Meadow Park crowd on Sunday. The Gunners qualified for the Conti Cup Final last week, but back-to-back defeats to fellow title challengers Chelsea and Manchester City have taken their title defence out of their hands.

They will need to win every league game they have remaining to be in with any sort of chance but that’s not beyond them. Montemurro’s side haven’t dropped a point against any team outside of the top 3 since April 2018. Spurs at home will present its own challenge however, despite thrashing Tottenham 6-0 in a pre-season friendly at Boreham Wood in August, Tottenham made much more of a game of it in the reverse fixture in November.

The first club in @BarclaysFAWSL history to sell-out back to back home games ??? https://t.co/vrvYFdhEvY

Arsenal had to wait over an hour for Kim Little to break the deadlock in front of a record 38,000 WSL crowd at the Tottenham toilet bowl. Spurs will dig in and try to frustrate with numbers behind the ball, before looking to hit Arsenal on the counter. In November, they cleverly left two upfront, with Rianna Dean and Kit Graham upfront in order to cut off Arsenal’s passing lanes from central defence.

The run-in starts now for Arsenal, essentially and they cannot afford to put a single foot out of place- even if they cannot retain their title, finishing 2nd and qualifying for the Champions League is a vital secondary target. The North London rivalry is still developing in the women’s game, but a sold out home crowd will certainly add some spice to the occasion.

TEAM NEWS
Arsenal are sweating on the fitness of Lia Wälti and Kim Little, who missed last week’s 2-1 defeat at Manchester City. Arsenal boss Joe Montemurro told Arseblog News he was hopeful that they would be fit. Jill Roord is definitely out as she serves a one-match suspension for accumulating five yellow cards this season.

Katrine Veje [foot] is still out with no return date set, Jen Beattie returned to the bench last week after two months out with calf and back problems and she is in contention to start. Dan Carter [knee] is unavailable, while Caitlin Foord is on international duty with Australia for their Olympic qualifiers in Sydney. Emma Mitchell, on loan from Arsenal to Spurs, is ineligible.

Three of the finest from @CaitlinFoord ?

LAST TIME OUT
Arsenal were 2-0 winners at the Tottenham toilet bowl in November thanks to goals from Kim Little and Vivianne Miedema. The teams played a pre-season friendly at Meadow Park in August and the Gunners thumped Spurs 6-0 with a hat-trick from Jill Roord and goals from Jen Beattie, Jordan Nobbs and Vivianne Miedema. The last time the teams met competitively at Meadow Park was the FA Cup 5th round in 2017 and Arsenal narrowly clinched it 10-0, the scorers were Dan Carter [2], Dominique Janssen, Kim Little, Danielle van de Donk [3], Chloe Kelly, Beth Mead and Katie McCabe.

DATA
A Dutch player has scored a hat trick for Arsenal in the last two fixtures at home to Spurs, with Danielle van de Donk netting 3 in the FA Cup game in 2017 and Jill Roord bagging a hat-trick in a pre-season friendly in August.

Vivianne Miedema has not scored in her last four WSL games. She has never gone five league games without scoring.

PLAYER TO WATCH
With Kim Little and Lia Wälti doubtful and Jill Roord suspended, Jordan Nobbs will assume extra responsibility to make a potentially makeshift midfield function. Nobbs has been a crucial part of Arsenal’s creative game, she’s in the 97th percentile for XG build-up in the WSL and she averages the most open play key passes of any Arsenal player this season. 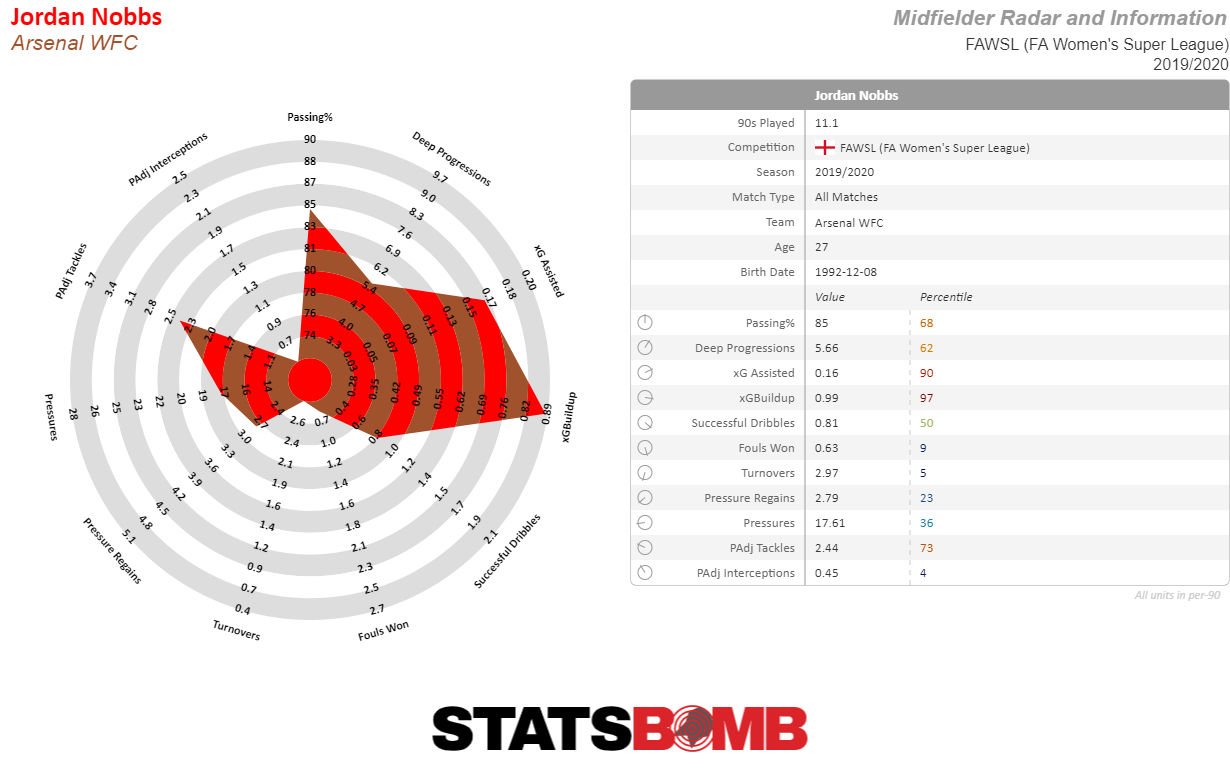 Only Vivianne Miedema and Beth Mead shoot more often than Jordan and there are signs that her goalscoring touch is beginning to return as her athleticism improves following her return from an ACL injury back in September. The Gunners have underperformed their XG in five of their last ten WSL matches and need to start correcting that and showing a more ruthless edge to their game, starting this Sunday.

THE OPPOSITION
Spurs sit in 7th place, which is thoroughly respectable given they are a newly promoted side. With Rianna Dean and Kit Graham upfront and Gemma Davison on the right, they are custom built to play on the counter-attack. Their back four will sit deep and look to frustrate Arsenal. Right-back Ashleigh Neville plays more like a third central-defender, Dutch international Siri Worm will play at left-back with Emma Mitchell unavailable and she will be a little more enterprising.

Most of Tottenham’s threat comes through Gemma Davison’s driving runs from the right-hand side. Joint managers Karen Hills and Juan Amoros have Tottenham well organised, as we saw in the reverse fixture. Emma Mitchell isn’t the only Tottenham player with history at Arsenal. Goalkeeper Rebecca Spencer had two spells at Arsenal, as did Gemma Davison- the latter was a member of the 2006-07 winning quadruple side.

Anna Filbey and Jessica Naz left Arsenal last year after coming through the Gunners academy, while striker Rianna Dean left the club in similar circumstances in 2017. Spurs forward Rosella Ayane is very good friends with Leah Williamson, who grew up as an Arsenal fan. Leah’s mum is also a Gooner but her father is a Tottenham supporter.

HOW TO CATCH THE GAME
The match will be live on BBC Online and the red button in the UK, but it will also be available on the FA Player app, which is only geo-blocked in Australia [Optus Sports will be showing the game Down Under]. The FA Player app is free of charge and can be downloaded from your favoured app store.

COMING UP
We’ll have exclusive player reaction for this match on the site on Sunday afternoon, as well as all the build-up and reaction to Thursday’s game away at Liverpool. If you haven’t had a chance to listen yet, we also spoke to Gunners midfielder Jordan Nobbs on this week’s Arsecast, previewing this game and touching on what it’s like to recover from an ACL injury and coping with increased scrutiny and criticism in the WSL. All the links for that are in the tweet below.