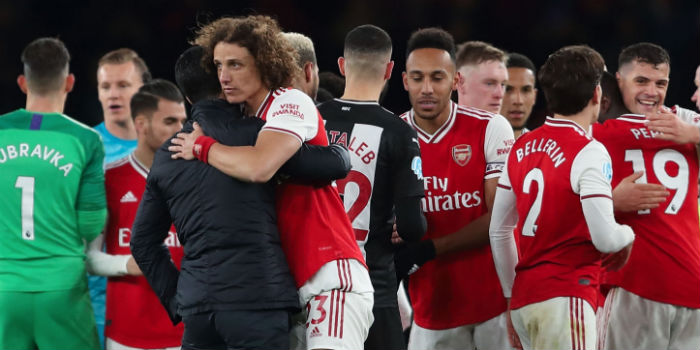 Mikel Arteta says he was pleased with the way his players improved against Newcastle as Arsenal scored four second half goals to secure our biggest Premier League win in nearly a year.

Pierre-Emerick Aubameyang, Nicolas Pepe, Mesut Ozil and substitute Alex Lacazette all hit the net in a 4-0 win as we clicked in the final third in our first game back after the winter break.

While the result does little to improve our league position – we’re still 10th – it will come as a welcome confidence boost as we look to build much-needed momentum in the final third of the campaign.

“Yes, it was [a sastisfying win],” he told his post-game press conference.

“We talked about turning those draws into wins and those margins that we could improve to translate that into more points. It was going to be very important in the first game at home after the break to get confidence like we’ve done today, so I’m very happy with that.

“We found it difficult in the first 20 or 30 minutes I would say. They’re really compact and really organised, and we talked before the game that you can get a little bit frustrated and start to rush the decisions, and when that happens your team doesn’t travel together and it becomes a transition game.

“They’re so good with Joelinton holding up the ball and their wingers running, and that makes it a flip of the coin. I didn’t like that game and after half an hour we started to control the situation much better.

“We started to get into the final third much more continuously and in the second half we tweaked one or two things and attached much better, and it allowed us to control the game in a much more efficient way.”

Reflecting on whether Arsenal might have gone behind during a brief spell of Newcastle pressure, he went on, “I will review the game, find the points that we can improve, find out why it happens and convince them why when we do certain things, the opponent has the chance to hurt us.

“In the opposite way, when we do the things that we have to do and we work and train on them, we will get the results and the rewards. It’s part of the process.”

We finally have positive goal df

Yes…maybe very important for us.

Glad we are ratcheting up the scoreline. We need more of these emphatic wins.

Its been a while.

Early days of course but I think Arteta’s influence on the team thus far has been exceptional. We all remember lacazette’s goal at the tail end of Emery’s reign where neither he nor the team even bothered to celebrate such was the mood of general despair. Contrast that with the smiling heap of bodies celebrating Lacazettes goal today. It’s great to see. Even Mustafi and Xhakaseem to feel like they’re part of the Arsenal family again and their reconnection with the fans is obvious. Great work senor Arteta !

Not mentioned by some who prefer not to but clean sheet.

If Arteta can improve (particularly) Mustafi, he must be doing something positive…

Mustafi’s better at passing than I thought. He can play it crisp, flat and accurate straight to the man which is the type of passing a CB needs.

Weird story.. But I played Fifa 16 last night round a mates during a sesh. Arsenal vs Chelsea. I started with Cazorla and Arteta at the base of my midfield. The game ended. 4-0 to the Arsenal

Still very much a team of two halves. fortunately we did not concede first half. Good ‘pepe talk’ by Arteta to get the team pushing forward where we look so tentative before. And we got our just rewards. As soon as the first when in, you could feel the proverbial ‘handbrakes’ were off and another was coming. Capped it with two more at end of match which is useful for GD. We are still stuck in tenth and will need to push upwards to really feel we are truly getting any form of genuine improvement. BUT Spurs still 4 points… Read more »

I stated in previous post that the next 7 league games for Arsenal are very winnable. For some reason I was negged to death. Newcastle, Everton, West Ham, & Norwich home as well as Brighton, Southampton away is about as a comfortable run as you could hope for in the PL. Project 21 had got off to a good start. I really believe that by the end of the Norwich game we will be right in the mix for a Champions League spot (especially bearing in mind 5th will potentially bring CL also). i think Arteta can really bring this… Read more »

Ceballos finding Ozil early was the key. Ozil was at his best when he had Ramsey running beyond him and Cazorla dictating from deep.

Where is the likes of moaner liker santori? i think he will moan again for the first half performance

Important to remember it was 0-0 at the half and didn’t look so good, which informed a fantastic Arseblog line “I looks as if this is a FIFA game where neither player is very good at the game”. Not exactly the line but it made me laugh out loud when I was stressing about the way the game was going

On a side note, actually thought Ceballos was taller than he appears here. Even Bellerin seems taller with Luiz totally dwarfing him too. Anyone?

Think you are correct Ceballos is a lot taller than Bellerin.

Its an optical illusion we see in this picture! 🙂

The second half was wow

The last time Arsenal put 4 past Newcastle, they came back and equalised. This time, by the time Newcastle realised it was four nil, the game was already over 🙂 No time for nonsense