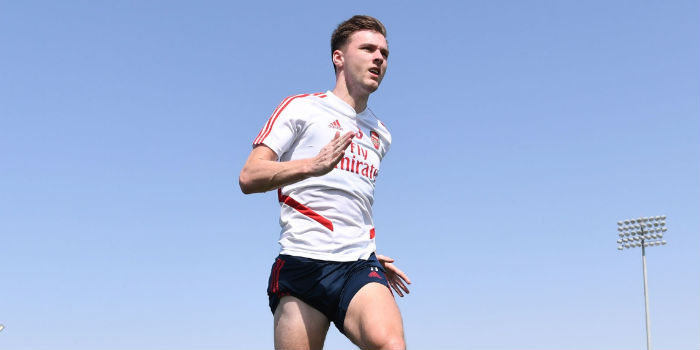 Shad Forsythe says one positive from Kieran Tierney’s shoulder injury is that the Scot will return to action very fit from a running perspective.

The summer signing from Celtic has endured a frustrating start to life at Arsenal. Surgery to solve a groin problem meant he didn’t make his debut until October and in his 5th Premier League appearance of the season away at West Ham in December he dislocated a shoulder.

The 23-year-old is still undergoing intense rehab to recover from that latest problem but has been training with the first team squad in Dubai during the winter break.

According to Forsythe, giving long-term absentees the chance to travel and live with their teammates is important for morale.

Speaking to Arsenal Player, he said: “A lot of our rehab players are very close, so if you’re looking at Reiss Nelson, at a couple of our new signings, you saw today that a couple them are integrated within the session, so the more we can get them in and around the team, the better.

“We also have Kieran Tierney who is rehabbing a shoulder injury so there are quite a few things Kieran can do with the team, with the ball as long as he’s not really in contact right now, so it’s really important to bring all the players that we can to be here together as well.

“The great thing, if there ever is a great thing about having a shoulder injury versus a lower limb injury in football is that we run.

“Kieran’s probably going to come back in very, very fit and very in shape from a running perspective because he’s been going tonnes of running or different patterns, ball work, things for his position specifically and also talking to Mikel and the coaches and building things that’ll have him ready to step in and perform in his position.”

Forsythe also touched on the importance of the Premier League introducing a winter break.

“This time of the season after the intense Christmas period and January cup competition is a time to repair, recover, reload and get your players on the brink of being fully fit.

“Obviously, Calum won’t be back until next season and a bit of freshness into the team and a couple of new signings as well, and I think it’s going to be valuable for that final push moving forward to the end of the season.”

Tierney: The least you can do is try and make the fans proud

Yes, hopefully he just requires a couple of games to get match fit and can help us with Europa and a top 6 push

Football is an Arteta

Ashish Mann
Reply to  Football is an Arteta

I love what u did there.

Your girl must love you, so easily impressed

This Winter break is worse than an unterlull… dying.

lol I miss the lads too, can’t wait to see that extra bit of work Arteta has had with them, its nice to face an opposition with equal rest instead of having the mid week game while they got a full week to prepare against us

Certainly better than players coming back tired and injured from international games that count for nothing.

I dislike national team qualifying and friendly games that much that I’m rather enjoying the football free break.

As a fan it can be quite annoying, but Arteta and the players need this break more than anyone. In this season’s case another week off would have been nice as well.

I feel for Calum. He was almost there to be our regular CB and this injury happens to him. Hopefully he will be back stronger than before.

I AM GOONER
Reply to  Victor Lin

‘Tierney’ is Keiran and ‘Chambers’ is Calum.

Watching the Bayern v RBL game and we didn’t half dodge a bullet with Boateng,He is ridiculously slow, and seems to throw his foot at anything without any thinking!

No but we should have sunk the money and bought Upamecano.

Yea because Leipzig were selling. Him for peanuts and he totes want to go from a bundesliga title fight and cl team to arsenal..

Tierney’s injuries over the last few years are a worry.

But from the little I’ve seen, he’s been impressive, he’s got really good delivery, he’s good on the ball, and looks to have plenty of heart and character
Getting Bellerin + Tierney playing regularly, would give us a real lift.

The full back positions have been a big issue for us over the last 13 months, hopefully we find some stability there soon.

A Brucie bonus from Forsythe.

I hope so, I do love Tierney and not just cos of his thighs. What a gentleman! Best left back in the country.

Those thigh muscles though ???

Tierney had played a lot of games for such a young player, maybe this time out will be good for him in the long run and set him up for an injury free season next year, here’s hoping.

Tierney was OK. Hardly the ‘masterclass’ some people prefer to dream of. BUT a welcome addition for sure.

Kolasinac has been excellent going forward for us and made a huge impact when available.

…defensively, BOTH Tierney and Kolasinac had issues.
BUT that’s symptomatic of issues further up the pitch as well bc Aubameyang was not doing enough off ball till Arteta came in.

Plus goal just before the half.

Going to comment again about how annoying the green “please comment” thing is! Apologies to all, but I cannot help myself.