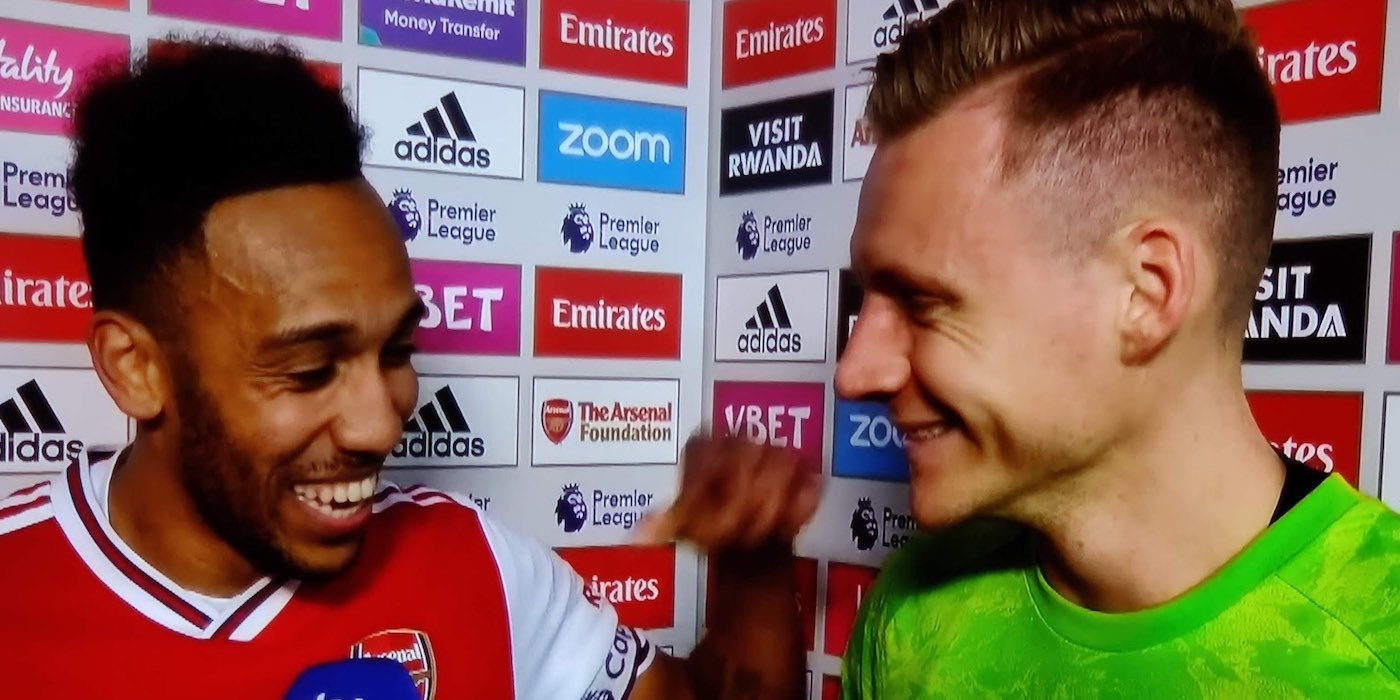 Pierre-Emerick Aubameyang and Bernd Leno spoke to Sky Sports after the 3-2 win over Everton. This is what they had to say.

Did you have to dig deep into well of character and energy?

Auba: It was a tough week, and it was hard today to find some energy at the end of the week but we did it. I think everyone is doing well, and giving more than 100% to win this game.

Did you feel you were hanging on?

Leno: Yeah, you could see that our power was gone at the end. When you see how we were fighting, when you can see how Auba is blowing, how much he was running – everyone is happy afterwards, we deserved this after this tough week. We have to keep going I think.

Auba’s goals were important, but what about Leno’s saves?

Auba: Yeah. We’re always happy to have him, hahaha. He saved us a couple of times at the right moment, we’re proud of him and we know we can count on him, that’s always good for us. He gave us some more energy to push and to give everything.

The 2nd goal – could you have done more?

Leno: Maybe my starting position could be higher, as a keeper it goes very quick. It was a bit unlucky for me, and very lucky for Richarlison, but in in the end it doesn’t matter. We won. That’s the main thing.

How good was Luiz pass for your first goal?

Auba: Great ball! I knew when I saw his face he was …[gets lost for word] … I just ran through, I was one against one and I love this.

Going for the 4th or hanging on to the one goal lead. Caught in two minds?

Auba: We tried to have some actions to score goals, but the most important was not to conceded. We defended with heart.

On 50 goals coming up for Arsenal

Auba: I’m just happy to score goals, I have to thank my teammates always!

Two kings. Auba is a pure athlete, I don’t think his age will affect him in the coming years as much as it would others

“I knew when I saw his face tells more about the bonding Arteta was talking about. When you can predict your mate by the look on his face. Great game, even Liverpool win some matches this way. 3 points in the bag on to the next game. Keep it up guys, thanks Arteta for Proving me right when I was clamoring for you to be our next manager even before Emery.

I think I’m time we’ll be glad emery was the transition guy while Arteta got a solid 2 years of title-winning experience with pep.

Great performance by both of these ballers!

to think that we had no competition for auba when we got him from dortmund is insane.

Same way Chelsea inexplicably had none for Ziyech.

Would love us to keep Auba a few more years.

Leno has been outstanding 99% of the time. He doesn’t deserve blame for the second goal.

He hasn’t been blamed as far as I know

That journalist clearly blamed him, asking if he could’ve done better for it. Key saves to protect the win though so another good performance in my book

Please don’t say he wasn’t blamed if you didn’t watch the game or hear the interview after the game. Where did you get your information from? So fking annoying when people don’t watch the game and then make shit up.

“We have to keep going I think.” “I think”? Funny comment. They were not at their best but it was tough opposition after a tiring week. Great win. I thought Luiz and Auba had a great game but Bellerin and Xhaka didn’t. The rest were ok. If we want to push on and challenge for titles we will have to replace quite a few players

Which match did you watch again? Xhaka didn’t have a great game? On what yardstick?

He watched the highlights game. Just the short highlight version.

Didnt want to watch the ball but was happy to hear the scores. Keep it going this is Arsenak

Could tell around the 70 minute mark that we were tiring a lot. They all dug deep to find reserves of energy to keep the win alive. Proud of how they played. Eddie was awfully unlucky to not make it 4 after some strong press work. 7 games unbeaten, we are on a great league run and the wins are coming in. COYG

What a superb display and classic win for that matter…. My heart is fool of joy and happiness am in love with Arsenal ?

Anyone know what Leno said after that stoppage-time corner/header? Looked to me like he went full Jens at the rest of the team.
My guess is something like: “WHICH OF YOU USELESS BASTARDS GAVE THAT CUNT A FREE HEADER AT *MY* GOAL!!???!”