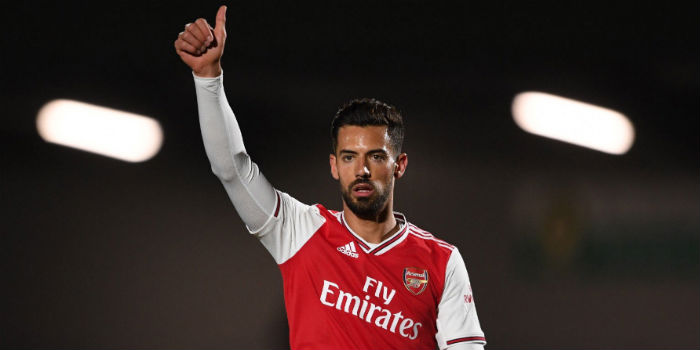 Pablo Mari and Rob Holding both 45 minutes for Arsenal’s under-23s as they lost 2-1 to Chelsea at Meadow Park.

Folarin Balogun put Steve Bould’s side ahead on 16 minutes but the visitors, who lead the Premier League 2 table, bounced back quickly courtesy of goals from Armando Broja and Billy Gilmour.

Pablo, signed on loan from Flamengo for the rest of the season, hadn’t kicked a ball in anger since the Club World Cup final against Liverpool in late December and has been working hard to regain full fitness since joining in January.

Given his appearance this evening, it seems unlikely he’ll feature in Greece on Thursday night. The same probably goes for Holding who has endured a stop-start season so far.

Mari has had some good moments. Impressive in the air. Composed on the ball and quite vocal but caught out a couple of times. Holding has shown some signs of rustiness but has also made some important interceptions.

While he’s been fully fit for a while, it appears he has fallen down the pecking order behind Shkodran Mustafi, Sokratis and David Luiz. Prior to this evening, the 24-year-old had played just 37 minutes of football in over a month.

Tonight’s result for the under-23s leaves them in fifth position in Premier League 2.

Our best Under-23 players are in the first team squad; AMN, Willock, Tierney, Saka, Guendouzi, Nketiah

Don’t worry, we still have Mustafi.

Caught out a couple of times is slightly worrying for Mari, but he is still a CB option I’m sure we’ll be glad we have.

It’s interesting that our “young” defensive talent aren’t held in the same esteem as the attackers.

Holding is further down the pecking order than Mustafi, who we know the club have tried to move on.

I’ve always rated Holding so hope he gets a chance soon.

There must be injury/fitness concerns with Holding. Maybe they are just being super cautious with his rehab

They are keeping him away from Mustafi, Sokratis, and Luiz so he doesn’t pick up any bad habbits.

Some people are surprised? As mentioned, we have done ourselves and Wenger, Emery now Arteta little favour not addressing Cback issue properly. Instead we prefer tot ake short cuts, throw numbers at the problem over quality. Some fans of course gullible enough to think Luiz was anything but a Squillaci last minute panic buy bc we could not extend an over the hill Koscielny and bought (expensively) a relatively untested Saliba who would be unavailable for us this season. Now we have Mari when I mentioned we would have been better off with Emre Can coming into upgrading the midfield… Read more »

You ve made an assessment already?

So… we needed to invest at CB and you think the best option was Emre Can?!?

Mari hasn’t even played for us yet. Let’s have some patience.

Come on, this is Santori you’re talking about! Never one to jump to conclusions and this was one of his briefer reports.

He’s not played in 6 weeks or something? Give it a rest

Was he playing in Brazil? Why do we always sign injured or unfit players? We must get a discount on the transfer fees. Damaged good, 2o% off.

Transfer fees? Mari is on loan.

Mari is only down the pecking order until he gains the fitness required…..He wont have to worry about people like Mistafi… he’s heading out Arsenal otherwise we wouldnt have bought another centre
back.