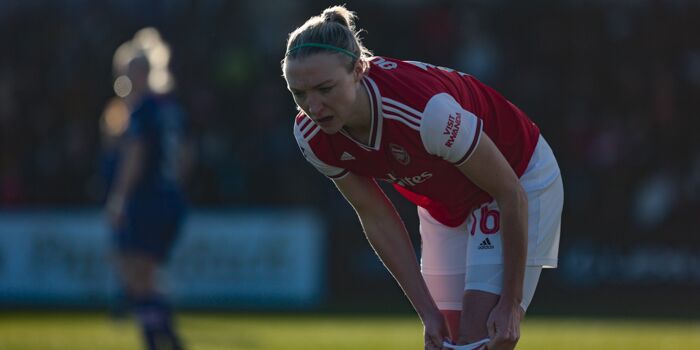 Arsenal Women defender Louise Quinn says that the squad are “going day to day” in response to the global coronavirus pandemic that has, among other far more serious consequences, plunged the football fixture list into chaos.

Arsenal Women’s games against Bristol City, West Ham and Paris Saint Germain have all been postponed with further postponements likely. The squad don’t know when they will play again, which presents many challenges, not least in terms of fitness and conditioning.

London Colney is currently closed after men’s team manager Mikel Arteta tested positive for the virus. Speaking exclusively on the upcoming edition of the Arsenal Women Arsecast (released in the coming days) Quinn says the players don’t yet know when they will be allowed back to training.

“We’ve all been sent individual training plans by the club, we’re all still on standby,” Quinn explained. “The coaches have been doing everything they can and emailing us fitness programmes and updating us on the situation, but also checking in on us because it’s a very strange time and most of us are away from home and our families.

“We’re all scattered from all over the place and everyone’s country is dealing with the situation differently at the moment. So we’re just taking it day by day, really. The club send us an email every day updating us, even when they don’t have much new information, just to keep in touch.”

With the team in limbo as to when they might be able to train together again and play fixtures, it’s difficult for the staff to know how to apply fitness and conditioning training, especially with the players housebound at the moment. Louise says the strength and conditioning routines remain as normal as possible.

“Our programmes are still personally tailored and we train on the same days- Monday, Wednesday, Thursday and Saturday and on a Sunday, when we usually play, we do some slightly tougher sessions. At the moment, I guess it feels a bit like pre-season but when you’re at home for the summer break. Usually we’ll have exercises and work we will do.

“The strength work is a bit more difficult because we can’t get to the gym at the moment. I have a bit of equipment at home that I use. When the time is right and we know when we might be back on the pitch again, I’m sure we’ll be given a bit more time to build up, but we’re all naturally very fit and we want to stay fit, so I don’t think we’ll drop off too much.”

As well as the fitness and conditioning challenges being presented to the players at the moment, there is a sense of distance from teammates. Camaraderie is an important part of the process of being competitive athletes. Quinn admits that the distance is another challenge.

However, the Irish international shares a house with Gunners ‘keeper Pauline Peyraud-Magnin and she says the players have supported one another through the situation. “We have a great relationship, but we also know we don’t have to see each other 24/7, we know when to give each other space,” Louise explains.

“I don’t know how many times I am going to say this is a strange situation, but we’re helping each other through it. It’s hard not to talk about the situation, obviously, but we also have some weird, funny conversations that make no sense, but that’s perfect!

“It was Pauline’s birthday this week so that was strange too, but we just stayed in and watched some movies and made some nice food.” Quinn also says that arrangements are being made to procure more equipment to help her and Pauline train together.

“I think we’re getting some boxing gloves and pads, so that could be interesting!” She laughs. “We’ll support one another, we are both away from home and away from our families. But we’re both just waiting for that text to tell us the training ground is open so we can get back out in the fresh air!”

Louise was speaking on the upcoming edition of the Arsenal Women Arsecast, which focuses on women footballers as rolemodels and the extra demands we place on female athletes to increase female participation in sport. That episode also features writer and broadcaster Carrie Dunn and will air in the coming days.

Lovely to hear from one of the less famed members of the squad. MightyQuinn was an integral part of last season’s title winners and this term has been largely on the first team fringes. Nonetheless she remains a valued and loved member of the group, committed, humble, intelligent. A thoroughly nice person.