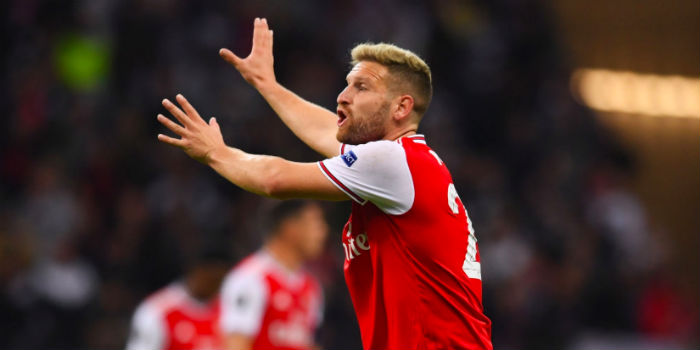 Shkodran Mustafi says he won’t think about his contract situation at Arsenal until football returns even though his future at the club is hanging in the balance.

The German is due to enter the final year of his current deal in June but with football on hold due to the coronavirus pandemic and the sport’s governing bodies frantically trying to understand the legal implications of an extended season, he admits it’s not exactly a high priority right now.

Mustafi was told last summer that he was free to leave the club but he’s enjoyed something of a renaissance since Christmas with Mikel Arteta returning him to the starting lineup.

In an interview with Sky Germany this week, he said: “We are in a situation where everyone is worried about the current situation and not so much about their personal future.

“It is difficult to think about my personal future. None of us know what will happen next and when we can play again.

“So, once we have overcome this difficult time and are back on the pitch, I can think about questions like that. At the moment, I don’t think about it.

“Also the club has more important stuff to deal with right now than my future.”

The Premier League is currently on hold until 30 April but it’s expected that will be pushed back even further.

The Premier League, EFL and Players’ Football Association met yesterday before releasing a statement that stressed ‘difficult decisions’ will need to be made ‘to mitigate the economic impact of the current suspension of professional football.’

The Times (£) says it’s only a matter of time before Premier League clubs ask players to take pay cuts.

Players at German sides Borussia Dortmund and Bayern Munich have already accepted cuts, while the Financial Times reports that at least ten of the world’s 12 highest-earning clubs in Europe will push their stars to do the same.

They also relay a claim by consultancy firm KPMG that predicts Europe’s ‘big five’ leagues stand to lose €4 billion if the current competitions are not completed. That takes into account cash lost from matchday, broadcasting and sponsorship revenue.

Taking that figure into account, you can start to understand why the biggest clubs are so desperate for the 2020/21 campaign to be completed.

“The club fully supports the collective intent to complete the Premier League, Emirates FA Cup and the UEFA club competitions,” they wrote.

They also went public on contingency plans for rebating season ticket holders should the rest of the season be played behind closed doors. We expect other clubs, including Arsenal, will do the same soon.

Put them all on furlough

Yes these are hard times and top flight footballers will have to take wage cuts along with the general population, many of who can’t really afford to. Talking of hard times am i the only one fed up with hearing ‘ arry’ Redknapp on the radio making money from advertising betting sites? Not a good time to be encouraging gambling in my opinion. Its bad enough having him on tv showing off his luxury lifestyle in Sandbanks. I don’t watch it but can’t escape the adverts. By the way this complaint has nothing to do with his conection with that… Read more »

Gambling companies have always been a disgrace. No doubt they’ll exploit the boredom of addicts during this time of self-isolation and milk them for the last few pennies they have left. Also disgusting how that Richard Branson is no longer paying his employees and asking the government to bail out his business, when he can easily afford to do BOTH himself. I hope everyone remembers all the profiteering, exploitation, and any other disgraceful behaviour, when it’s all over. Everyone should refuse to take a Virgin flight (train might be difficult to avoid), cut their subscriptions to Virgin Media and contacts… Read more »

Leave, Shkodran, while you still can!

Player of the year

Just cancel the season. Once the world is back to normal, give the players their 3 month break and begin a new season

Talk of cancelling/voiding/ending the season early doesn’t make much sense to me. We have to sort out promotion, relegation, European places. Most importantly we don’t know when we will be able to play again. The implicit assumption is that we can start 20/21 in August/September but there’s zero guarantee of that. If it’s June then we can restart this season when we should have had Euros and cut the transfer window short, maybe start 20/21 in September. If it’s December/January or later it makes more sense to restart this season then and “skip” 20/21 instead of starting 20/21 so late.… Read more »

how do you finish a season with different players which is what’s going to happen if the season finishes after June 30? You can’t force players to extend contracts (would violate labor laws) & can’t imagine many players who can leave on lucrative Bosman would be willing to risk it to finish a season on a 2 week contract. The PL should seriously think about Belgian style mini league to decide promotion/ relegation & European spots as logistically finishing the league is looking more and more unlikely

There are no easy answers with any of this. I think all you can do is ask the bosman players if they’re willing to extend until the end of the present season. If they so no then that’s it, the clubs will have to do without. It’s unfortunate but imo it’s a relatively small issue.

were going to reach a point extremely quickly where it’s going to be a choice of finishing this season normally vs having to make material changes to next year. The title race is already over. It’s really just a question of sorting relegation/European places which can easily be done via Belgian model.

How does the Belgian model work?

They have mini league at the end where teams carry over a proportion of the earlier points total. So you might take bottom 6 teams and they each start with proportion of current points and play for relegation. Etc. we’re not going to fit all the games in unless the league starts really soon which seems very unlikely

Finishing the season with different players won’t be an obstacle. Sure the January transfer window sees players coming and going mid-season anyway.

It’s not that hard to imagine ending the season with different players to when you started. Up until 2006 you could sign and sell players at any point in the season. For most football fans it doesn’t seem that long ago, so it’s not so weird

Season must be finished. Even if it’s next year Next season can be cancelled

I always wondered what the hell happened to Mustafi. And then I remember Gary Neville managed him at Valencia.

There is certainly no easy answer to anything around this virus other than the need for people throughout the world to stay home so we can hopefully stop the spread of this horrible virus. There is no way it will be safe for any sports league or competition to get back to normal operations for at least two months (puts us at the end of May). Even once it is deemed safe to stop the social distancing teams are not going to be able to start playing for at minimum a few weeks I would think as the players need… Read more »

Fitness it is same for all teams tho. Some athletic players will have to get up to speed, but that gives more room and space for technical, slow skillful players to show their class in games e.g. a xhaka, Juan Mata , Bernardo silva or ozil ( tho he is fast) , so if anything more fun games to watch .

Frankly, with the models showing the peak of the virus in in the UK not happening until late May/early June, I think the idea that there might be any football played this summer, even behind closed doors, to be rather fanciful.

Wont the players be subject to Furloughing or taking the same hit as independent companies?

If the season is ended how will they decide chmpions league places for next season? I suggest they use the 18/19 standings, hence arsenal in 5th place will qualify if Man City are banned.

The geezer has been on good form recently. Not a world beater but an asset. And better than most of our CBs.

Are you coming from another dimension where he is good at football?

Are you coming from another dimension where you actually know something about football?

Finish by playing two or three games a week like over Christmas. Even if this is not til September/ October. Liverpool will still win league and euro places and relegation will be decide by both which teams have best squad and which managers best at rotation of players.

From a situation where we had no decent centre backs a bit of Arteta coaching and tactics has proven we have some pretty decent ones and Mustafi has been very good indeed. I’d much rather we gave him a new contract and focussed on getting a couple of really good midfielders, we won’t have a huge amount of money to spend and I think our midfield is the biggest problem, plus sorting out the situation with Auba.

Am I the only one who thinks the TV stations should be told to fuck off and take the financial hit like everyone else? It’s an unprecedented situation, not something that football clubs have done out of negligence or spite. All this talk of clubs having to pay back TV stations for coverage of matches that can’t be played is nonsense.

Mustafi thinks with deflection the club will forget to offload him in the next transfer window. With the mistakes he did and the points he cost us he should be paying fines and be happy to still be on the books for Arsenal. If we had a more capable board he would have been in some mid table club in CH or DE.

Mustafi is much better at defending than you are at writing in the English language. “…. mistakes he did ….”? It’s supposed to be “….. mistakes he MADE …..”, you thicko. And have you ever heard of commas? I bet you wrote “CH” and “DE” because you can’t actually spell, presumably, China and Denmark. If we had a more capable education system in this country, you would still be in kindergarten and not allowed to enter year one, let alone secondary school, let alone still the big bad world, to this day.

I’m not English. But I bet I speak English much better than you speak my language. And yes, I know how to spell Switzerland or Germany, Suisse or Deutschland if you will. You must be Mustafi’s brother since you’re defending him so passionately and throwing such insults at someone you don’t know?

Hmmm…For life is more than food, raiment and money.